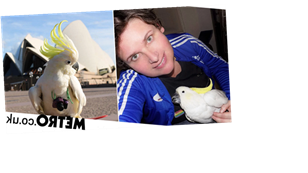 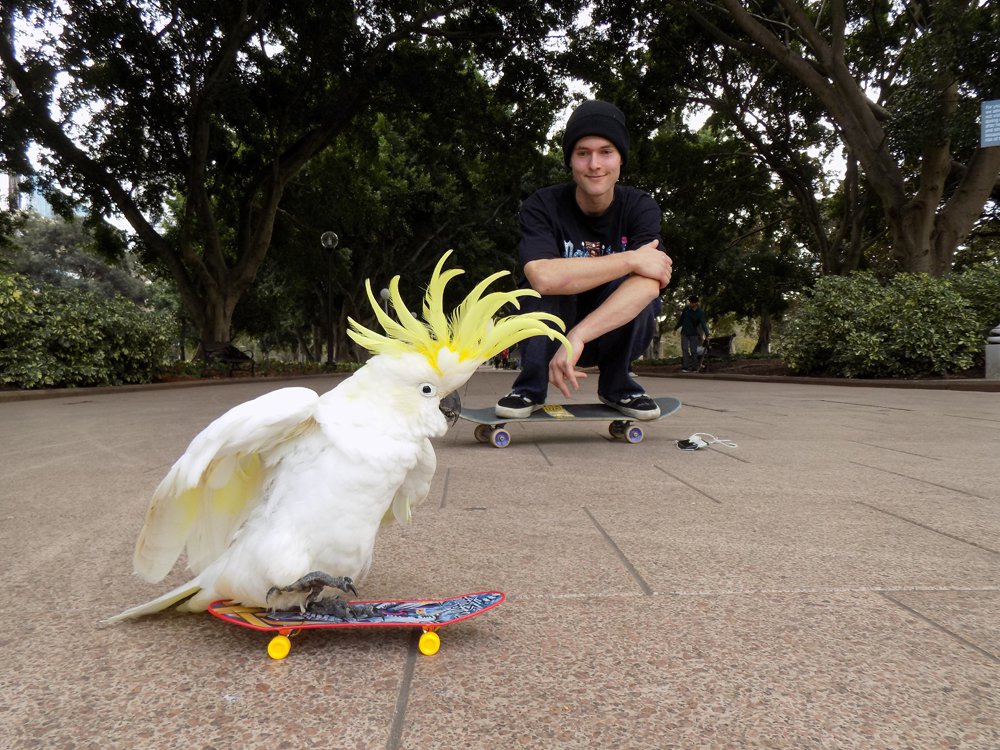 How do you celebrate the life of a 100-year-old cockatoo who loved to skateboard?

For Sparrow, 48, it has to be a photo book sharing the bird’s story with the world.

Formerly known as Trieste, Sparrow Townsend changed her first name back in 2012, in honour of her love of birds.

She spent hours in an aviary as a child, and went on to keep parrots and launch a career making costumes for pet birds.

But in all her years of bird appreciation, Sparrow never found a bond quite like the one she shared with Samantha, a frail 100-year-old cockatoo she adopted from a pet store near her home in Sydney Australia.

She said: ‘Samantha was up for adoption and according to the store, she was almost 100 years old.

‘She was actually very close to death when I adopted her.

‘But I’m used to rehabilitating birds and bringing them back from the brink of death.

‘Samantha basically came back to life rejuvenated, which was wonderful.

‘After two weeks of perching in front of a sunny window in my apartment and eating fresh fruit, birdseed and calcium supplements, she really perked up.

‘To reach the age of 100 is quite a special achievement – it’s a rarity even in the wild.’

Sparrow, whose quirky pictures of birds in fancy dress regularly appear in conservation calendars for local charities, took Samantha out for photoshoots in which she proudly posed perched on a skateboard, with a bird-sized camera around her neck, in front of the world-famous Sydney Harbour Bridge.

‘Her attitude was great, which was so useful,’ Sparrow, who has a 28-year-old son, Mikhailion, said.

‘She was very fit and vocal, and she was even running around a lot. She was eating very well, she was playful.

‘She just loved participating in the things I was doing with her.

‘I think that’s what actually kept her alive.’

Sadly, by the end of the summer of 2020, Samantha was becoming weaker.

The bird’s constant screaming alerted a vet to the fact Samantha was ‘riddled with arthritis and had a lot of swelling’.

‘He said he couldn’t believe that she had coped for so long and it was obviously the care I gave her which had made her hold on,’ said Sparrow.

‘She was rejuvenated with the love I gave her, and he said it was amazing she had lived so long.’

Clearly, poor Samantha had been battling arthritis for some years and, on September 30, Sparrow made the difficult decision to have her put to sleep.

She said: ‘Samantha was so active for quite some time and was having so much fun, that I had no idea that she was in such pain.

‘We could either operate on her, which would just be cruel at her age and put her through a lot of trauma, or choose to euthanise, as that would be the kindest thing.

‘Anyone who has animals will understand that they become a part of your family or a part of your life, making it very difficult to say goodbye to them.

For Sparrow, the birds she has befriended have not just been companions, they have also helped her through extremely difficult mental health struggles, allowing her to cope with claustrophobia, anxiety, and panic attacks.

She has adopted a number of parrots down the years, including Sparky, Snoggy and Bluey – all of whom enjoyed dressing up and posing for the camera.

Pictures of them will be included alongside those of Samantha in a coffee-table style book of Sparrow’s photographs, to commemorate her many beautiful birds.

Images include budgies playing the piano, skateboarding, pushing shopping trolleys and dolled up in tuxedos or Superman costumes.

While Sparrow comes to terms with the loss of Samantha, she’s currently enjoying spending time with Yam, an 11-year-old ginger cat who loves posing with birds for photographs.

But she plans to adopt another bird ‘very soon’ to fill the feathered hole in her life that Samantha left behind.

Sparrow said: ‘I’d say within the next month, more than likely, there’ll be another adoption on the way and that will definitely be an ongoing thing in my life.

‘I’ll always have a bird in the family.’