Seeing Joe Amabile with Serena Pitt proved to be too much for Kendall Long on ‘Bachelor in Paradise’, and after confirming that her ex had officially moved on, she decided to leave the beach.

Joe Amabile and Serena Pitt’s relationship is stronger than ever on season 7 of Bachelor in Paradise, but having his ex, Kendall Long, on the beach hasn’t made it easy for anyone involved in the love triangle. Although Joe previously made it clear to Kendall that he was going to continue pursuing a relationship with Serena, she couldn’t get past how difficult it was to see him with someone else. “I’ve done a lot of crying and most of the time I feel liek it’s been awkward and I’ve been having a hard time with it,” she admitted. “I don’t want to be upset in front of anybody and in front of him and Serena. It feels frustrating.”

Kendall knew she had to have a talk with Joe in order to hash out her feelings. “There’s still something that holds me to him,” she said in a confessional. “It’s hard to be this vulnerable. Part of me really wants to keep trying. I don’t want to just give up, but at the same time, I’m not letting Joe’s relationship get in the way of my happiness anymore. One thing I know for sure…I will always love Joe. I think he feels the same way that I do.” 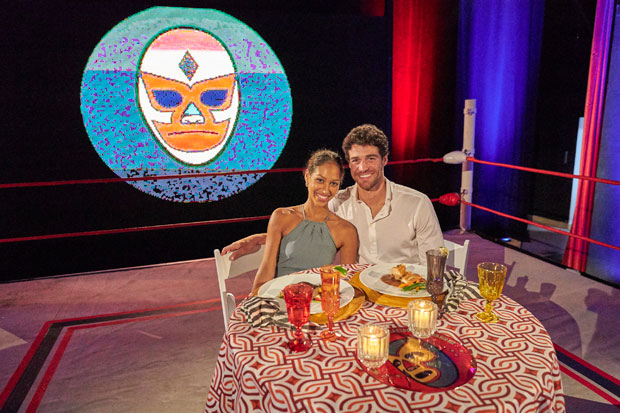 Kendall pulled Joe aside and told her how hard the situation has been for her. “Being here has brought back a lot,” she explained. “I think I always go back to thinking about how we first met here and everything we went through when we were first here. I love the way that we used to be. I still feel like you are my best friend. I love seeing you thriving and being happy and being funny and making connections, but it reminds me of why I fell in love with you. It’s just hard to see that.”

She began crying as she revealed that she “never stopped” loving Joe. Although he didn’t express the same sentiments back, he comforted her as she sobbed, and let her know, “I’m here for you.” Kendall was self-conscious about being so vulnerable, and she admitted, “I feel like I shouldn’t have come here.”

At that point, Kendall began to realize that she and Joe were not on the same page. She explained that she came to Paradise because she felt like she was “always going to have love” for Joe. However, he felt differently. “To be honest, the reason I came out here was because I knew it was over between us,” Joe said. “If I didn’t feel that, I wouldn’t have come. I was under the impression that you felt the same way.”

They ended the conversation with a hug, and Kendall knew it was time for her journey to end. “I’m heading out,” she told the group. “It’s just been really torturous.” Leaving meant that she had to end her fling with Ivan Hall, who she got a rose from at the previous rose ceremony. Kendall left in tears as she tried to finally put her relationship with Joe in the past for good.

“This is just devastating,” she said as she drove away. “Joe is my person. I was in a real relationship with Joe and then I came back where it all started and I just feel absolutely broken.” Meanwhile, Joe found solace in Serena. He explained that it was hard for him to see Kendall so upset, but assured Serena that it wouldn’t take anything away from their relationship, which is definitely getting serious!