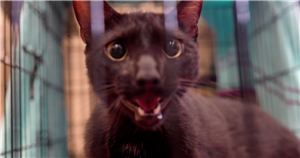 Exactly two weeks after a 12-story condo building in Surfside, Florida, suddenly collapsed, a pet cat named Binx has been found and reunited with his family. Binx and his owners lived on the ninth floor, officials said.

Miami-Dade Mayor Daniella Levine Cava told reporters on Friday that a volunteer found Binx in the vicinity of the rubble while feeding stray cats and thought she recognized it. The volunteer then brought Binx to an animal shelter, where the cat was identified.

“I’m glad that this small miracle could bring some light into the lives of a grieving family today and could provide a bright spot for our whole community in the midst of this terrible tragedy,” Levine Cava said.

The Kitty Campus, a local animal shelter, wrote on Facebook that the cat was brought to their shelter late Thursday night. The following morning, the shelter wrote, one of Binx’s owners came to identify him and take him home.

Footage from the Miami-Dade Fire Rescue shows Binx’s owner saying she’s feeling “a little bit of relief and shocked” upon reuniting with Binx. She called her mom and sister to confirm Binx’s identity, and said that he was responding to his name.

What we can tell you about BINX the cat from Champlain Towers who survived 12 days after the building collapse….

“We already had a feeling that if one of our animals were to make it, it would be him,” she said. “I’m happy. It’s been a very long journey in the past two weeks.”

Gina Vlasek, co-founder of The Kitty Campus, wrote on Facebook that this should serve as a reminder to “never, ever, ever give up hope.”

“All we needed was a ray of hope in this tragedy,” Vlasek wrote. “Today was one of the most amazing days.”

Missing pet flyers posted on Vlasek’s page show that the family had multiple pets in their ninth-floor condo in Champlain towers, including a dog named Honesty, a dog named Daisy and another cat named Hippo.

The Kitty Campus also posted about the family’s reunion on Facebook on Saturday, saying that the cat had been “returned to the family who had already lost so much.”