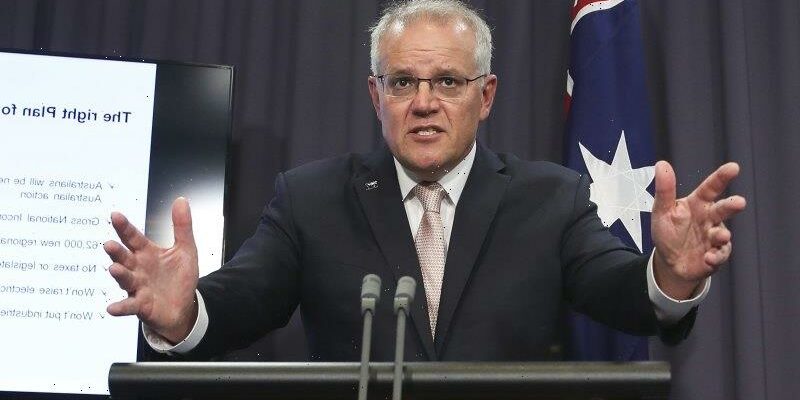 Prime Minister Scott Morrison is promising billions of dollars in further spending on climate policies to reach a new official target to slash greenhouse gas emissions to net zero by 2050, opening a battle with Labor over who has the better plan to achieve the goal. 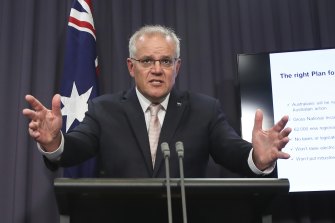 Prime Minister Scott Morrison will promise billions of dollars more in spending on climate policies ahead of the next election.Credit:Alex Ellinghausen

The new spending will be unveiled in a series of policies ahead of the federal election next year, adding to $20 billion already promised and incurring debt that will require greater tax revenue over time to cover the cost.

But Labor leader Anthony Albanese slammed the statement as a “scam” rather than a plan, while industry leaders said the policy remained “incomplete” because it did not have enough detail about how each measure would work.

While the government said its $20 billion technology investment roadmap would help reduce emissions by 35 per cent by 2030 and take Australia toward net zero by 2050, it assumed global trends and future technology breakthroughs would do the rest of the work.

Years after former prime minister Tony Abbott warned against the use of international credits to claim cuts to emissions, the government also assumed almost one fifth of its target could come from offsets traded within Australia and overseas.

The offsets idea might expand the use of rural schemes to sell carbon abatement through changes to land use, allowing farmers to collect a payment, but there were no details on how existing rules might change.

The policy statement did not reveal new mechanisms to lift Australia to the higher target and did not include modelling on the net zero goal, although Mr Morrison said the modelling would be “eventually” made public.

The government also declined to reveal the spending measures it has agreed with Nationals leader and Deputy Prime Minister Barnaby Joyce to secure the agreement of his party room for the net zero commitment.

But the Tuesday statement resolved years of internal dispute over climate policy before Mr Morrison departs on Thursday for a G20 meeting in Rome and United Nations climate summit in Glasgow, where net zero by 2050 could be seen as a minimum pledge for an advanced economy.

“Our government has come from difficult places, had hard discussions, but we’ve worked through it together, and we’ve come to this position.

“All of our policies, our investments in the regions, additional investments across a whole range of areas, they will be outlined as they have been outlined over these many years since the last election.”

Mr Albanese rejected the policy pledge on the grounds it was based on existing policies rather than new action.

Greens leader Adam Bandt accused the government of a “climate fraud” because there was not enough detail and it relied on an existing technology investment roadmap.

“The so-called plan has no new money, no new policies, no increase to 2030 targets and will mean more coal and gas,” he said.

Business leaders also expressed concern about the lack of detail, with Australian Industry Group chief executive Innes Willox saying the broader government plan remained “incomplete” even though he welcomed the fact that both major parties were committed to the same destination.

“A lot more work will be needed to flesh out the plan to get there,” Mr Willox said.

“Today’s announcements are not an end but perhaps a new beginning.”

Carbon Market Institute chief John Connor welcomed the commitment but said he was disappointed taxpayers would have to pay $20 billion when business should bear the costs.

While the United Nations has called on leaders to set a 45 per cent target for 2030, the Prime Minister said he would go to the election with the government’s existing target to cut emissions by 26 to 28 per cent by that year.

Energy Minister Angus Taylor said the government’s latest forecasts showed it would reach 30 per cent by 2030 under existing circumstances but could reach 35 per cent when assuming the spending measures in the technology investment roadmap.

Mr Taylor is looking at low-cost solar to produce electricity and livestock feed technologies to reduce methane, among other long-term technology options.

“This is not technology we don’t necessarily know about. It may well be technologies that we know quite a lot about but have not yet got to the point where we can make them priority technologies,” Mr Taylor said.

With environmental groups saying net zero by 2050 is not enough to prevent dangerous global warming, Treasurer Josh Frydenberg told the Coalition party room on Tuesday that the government could never satisfy some critics no matter what it did. Mr Frydenberg said the government plan met the test of what was “reasonable and practical” for the country.