When one of my singing students – a 13-year-old – said that to me, back in May last year, I was surprised, and I wasn’t entirely sure it was my scene.

TikTok was for cool youngsters to strut their stuff – not where Sheridan Coldstream, a then 57-year-old vocal and confidence coach, did his thing.

But I thought ‘why not?’ and decided to give it a go. I hoped to reach more people with my positive messages around self-confidence and, more selfishly, thought it could be good for my business.

Within a few weeks of my first post, I’d gathered 60,000 followers.

And then the unthinkable happened: I found myself TikTok famous in my fifties.

I was christened Charles William Sheridan Coldstream. It’s not a stage name – epic names just run in my family.

I’m a voice and confidence coach, and live and work about half an hour from Oxford. I’m not exactly what you’d call an alpha male.

I’ve always been a performer. I trained at drama school from 18 to 21, and have worked as an actor and singer all my adult life.

It was a natural progression for me to combine that with coaching.

I started teaching people to sing in 1998 – and since then I’ve taught everyone from six years old, to 80. I discovered such joy realising and nurturing talent in other people. 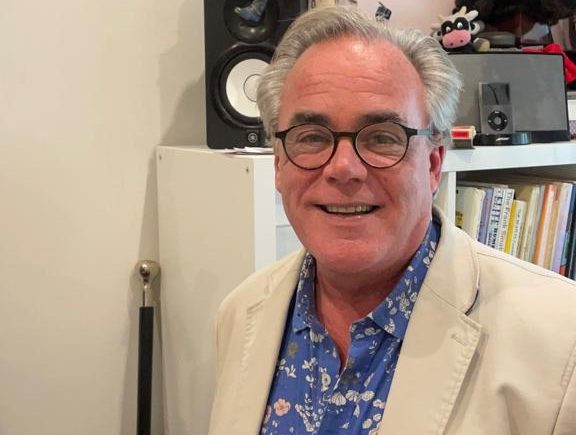 While I’m teaching people to sing, I try to help my students feel good about themselves. By praising when I can and encouraging where possible, I give them self-confidence.

In turn, I feel like it makes them better singers.

Inspired, just before my 58th birthday last May, I took my 13-year-old student’s advice and did my first TikTok.

It was a repost of an Instagram Reel I’d made about an inferiority complex; I’d been pleased with it pleased and thought might be a good fit for TikTok.

Two days later I did another.

Soon, I was posting three times a day – a combination of my thoughts on mental health, singing tutorials, performances I’ve loved and duets where people can sing along with me. The duets soon went viral.

I had no idea that acquiring that many followers in such a short time was a big deal, but when the ‘WTF’ reactions started pouring in from my students, I was quite shocked.

The week after Billie Eilish headlined Glastonbury, I’d posted a duet of her song Listen Before I Go – because it’s a song a lot of my pupils like to sing.

Shortly after, I’d just finished work on a Saturday and was relaxing, scrolling through TikTok, when up popped my own post about Billie Eilish’s song – except, this time, someone else had dueted with me.

It had only been uploaded a few minutes earlier and the comments were already pouring in, with people claiming it was in fact the real Billie Eilish.

I couldn’t believe it was true, so I hunted down Billie’s official account and sure enough, there I was.

Billie Eilish had sung her own song while I was playing the piano and, more than that, she took my direction to sing the chorus an octave higher to make it less what I’d called, ‘low and grungy’.

At the end, she appeared on-camera smiling. I was gobsmacked. I rushed upstairs to tell my daughter whose response was quite unrepeatable!

When it all sank in, I felt overwhelmed – what an extraordinary thing, I thought. I’m still touched even now that she took the time to do it.

Safe to say, the whole of TikTok went mad and my phone was ringing off the hook. The video has now had 45million views, more than 100,000 comments and over 7million likes on Billie’s account. And I’m now heading towards 270,000 followers on mine.

I don’t know why Billie Eilish chose my video, but what it has demonstrated is how technology like TikTok can bring people together. How else could someone like Billie Eilish duet with a musician like me, on the other side of the world? Isn’t that a wonderful thing?

What’s amazing is Billie hadn’t posted anything on TikTok for three months before that, either – and hasn’t posted a duet since.

For a long time, I’d been looking for an opportunity to reach more people and grow my business.

Now, this has blown the doors wide open for me with opportunities, and I’m excited to be able to share my singing and my philosophy on wellbeing with the world.

Seven months on, I’m the same person but my life has changed completely. I’ve made TV and radio appearances, have an influencer agent, and have even had exciting interest from major TV channels.

I can’t imagine where it’s all going to end, and I feel like I’m riding the crest of a wave – and I’m enjoying every second.

What I really love about this whole, once unimaginable ride is that I’ve just been my own totally unfiltered self. And that attracted the attention of the coolest 21-year-old singing sensation in the world.

As told to Bobby Twidale

Age is Just a Number

Welcome to Age is Just a Number, a Metro.co.uk series aiming to show that, when it comes to living your life, achieving your dreams, and being who you want to be, the date on your birth certificate means nothing.

Each week, prepare to meet amazing people doing stereotype-defying things, at all stages of life.

If you have a story to share, email [email protected]