Building, healthcare and transport companies are falling further behind on their bills despite signs businesses are increasingly upbeat about the state of the economy.

Data compiled by CreditorWatch, released on Wednesday, shows creditors are waiting more than two months to be paid for services or goods supplied to some sectors. 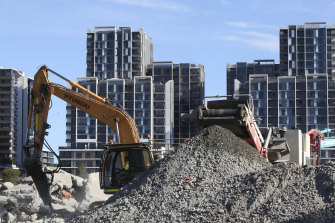 The time taken to pay bills across the construction sector has jumped to 44 days compared to 30 days last year.Credit:James Alcock

Despite the deepest recession since the 1930s, business closures and administrations fell through 2020, in part due to government support programs and changes to insolvency laws.

One of the nation’s largest credit data companies, CreditorWatch found this could be changing as support measures started to end, exposing businesses to more traditional financial pressures.

It said businesses in the healthcare and social assistance sector took 66 days to pay their bills in January, up from 16 days in the same month last year. Administrative and support service businesses took 67 days to pay compared to 34 days in January 2020.

Residential builders have reported a surge in demand but it has been a different story in commercial construction. The time taken to pay bills across the sector has jumped to 44 days compared to 30 days last year.

Other large increases have occurred in the transport and warehousing sectors, professional services and wholesale trade.

CreditorWatch chief executive Patrick Coghlan said the lift in the construction sector could be a portent of pressures that would play out as government support programs ended.

“Due to the COVID-19 pandemic, the commercial building sector is suffering, which is one of the main factors behind rising payment times across the construction industry,” he said.

“However, increasing payment times in construction are partly seasonal and, encouragingly, residential construction is booming thanks to government stimulus and low-interest rates driving demand in the housing market.”

CreditorWatch also reported a 52.6 per cent dive in appointments of external administrators to distressed businesses over the past year despite the recession.

Mr Coghlan said the numbers were being artificially supported by federal government measures protecting companies that were likely to have traded while insolvent.

But there are positive signs for the economy, with the NAB monthly business survey for January on Tuesday showing a strong lift in business confidence despite falls in profitability, employment and overall trading.

In line with CreditorWatch, the survey found construction companies experienced negative trading conditions last month. Only one other sector, recreation and personal services was in negative territory.

Business conditions were strongest in Western Australia. Victoria reported the weakest trading conditions but also had the highest confidence.

NAB chief economist Alan Oster said while there had been a pullback in conditions through the start of the year, the outlook was positive.

“Given conditions remain above average, notwithstanding the fall this month, and lead indicators continue to trend higher, the survey continues to point to an ongoing recovery,” he said.

The Reserve Bank, in its quarterly monetary policy statement, noted on Friday the supply of credit to businesses had tightened over the past year, mostly for firms hit hardest by the pandemic.

“Some banks continue to be cautious about lending to particular sectors – such as tourism, retail and commercial property – and to customers that are new to the bank,” it found.