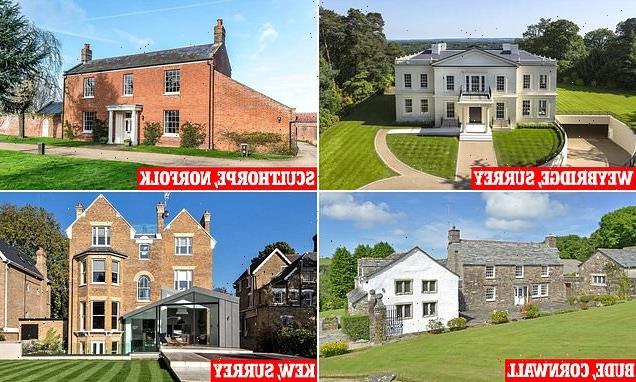 The race for space among buyers of luxury homes shows no signs of slowing down despite the looming stamp duty holiday deadline, new research suggests.

Estate agent Savills said the desire for more room and land has driven the luxury homes market during the past year of the pandemic and that this looks set to continue.

This is despite a majority of buyers expecting to miss the looming stamp duty holiday deadline on June 30, it said. 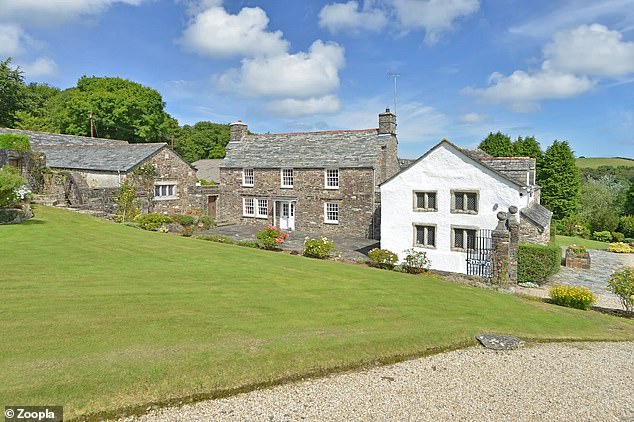 This seven-bedroom detached house in Cornwall’s Bude is for sale for £2.25million via Colwills estate agents 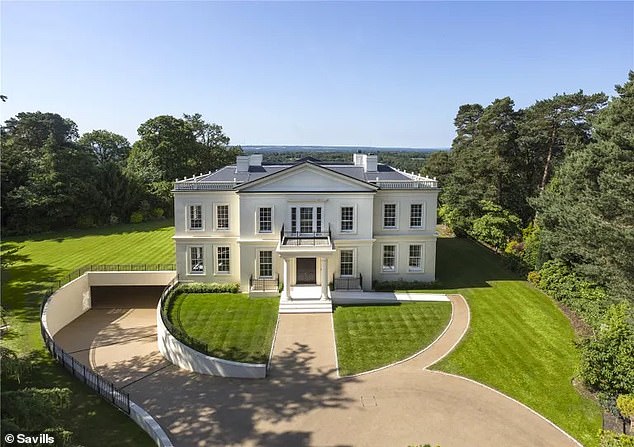 This five-bedroom detached house on St George’s Hill in Surrey is for sale for £14.5million via estate agents Savills

Among buyers with the necessary financial security, the strong desire for larger homes with bigger gardens or in greener locations that are closer to family will continue to underpin demand in the coming months, Savills said.

More than two-thirds – at 71 per cent – of those currently in the middle of purchasing a property have no expectation of completing ahead of the deadline.

It means that a potential stamp duty saving was not factored into their decision-making process, according to the latest survey of around 750 Savills buyers and sellers conducted between June 4 and June 8.

The break on the first £500,000 of a home’s purchase price delivers a maximum £15,000 tax saving on properties costing at least that much.

A vast majority – at 85 per cent – of those still hoping to complete in time said that failure to do so would not affect their transaction in any way, rising to 90 per cent among those buying homes costing more than £1million.

One in 10 said they will look to renegotiate on price if they miss the deadline, perhaps splitting the difference with the seller, while only 5 per cent said they might choose not to progress with their transaction.

At the £2million-plus end of the market, all respondents said they expected to proceed as planned. 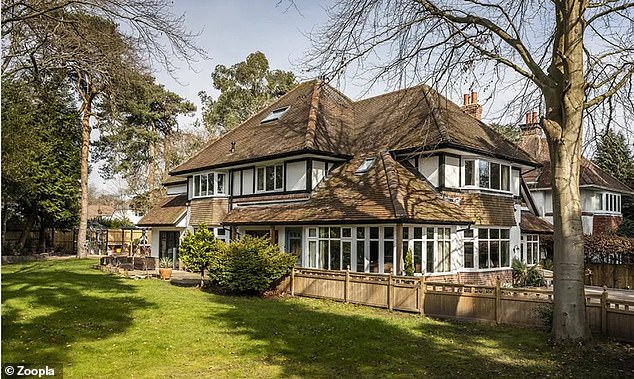 This six-bedroom detached house in Bournemouth, Dorset, is for sale for £1.65million via Mays estate agents

Frances Clacy, of Savills, said: ‘Lifestyle choices made during lockdown, or brought forward as a result of the experience of lockdown have almost totally dominated decision-making in the prime market over the past year and look set to do so over coming months.

‘Buyer and seller commitment to moving over the coming year remains strong although slightly lower than in June 2020 when the market reopened after the first lockdown.

‘The stamp duty holiday was announced in July, and while it may have brought forward some transactions, this survey tells us that it has not been the major motivator among equity rich home movers in the prime market.’

Lifestyle needs continue to dominate buyers’ wish lists, according to the estate agent.

It asked buyers to rank their top two ‘must haves’ in their new home, with more than half – at 54 per cent – of respondents naming extra living space, 40 per cent a larger garden, and 33 per cent an extra bedroom.

This desire for space remains at its most intense in London, with 59 per cent naming extra living space, 46 per cent a larger garden and 40 per cent an extra bedroom in their top two.

Home working looks set to continue to form part of people’s working week, with 41 per cent naming a separate working-from-home space in their top two. 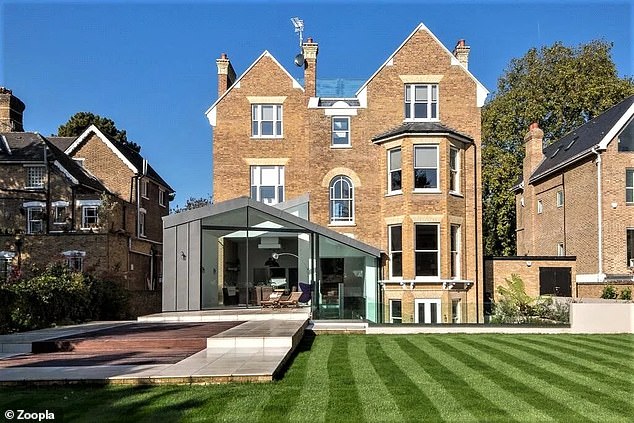 This seven-bedroom detached house in Kew, Surrey, is on the market for £8.5million via estate agents Antony Roberts-Kew

Ms Clacy added: ‘The pandemic has made people re-evaluate what they want from their homes and their leisure time, with many prioritising a better work-life balance.

‘In a light-hearted illustration of this, 15 per cent of respondents want their new home to be located close to a pub or restaurant, trumping proximity to work at just 12 per cent.’

The stamp duty holiday applies to properties worth up to £500,000 until June 30.

After June, the stamp duty-free threshold drops to £250,000 until the end of September.

She added: ‘In London, however, it’s a slightly different picture, and there’s evidence of buyers starting to prioritise a return to the office in their choice of home.

‘Being close to public transport is a key consideration for home buyers again, second now only to proximity to a park.

‘Over four in ten – at 43 per cent – in the capital now wish to live close to a station, compared to just 19 per cent across the prime regional markets, and up from 39 per cent in March.

‘But even though it’s rare for Londoners not to have a pub or restaurant within close walking distance, proximity to a pub – a top two essential for 11 per cent of respondents – still trumps proximity to work at just 9 per cent.’

‘More widely, while demand remains strong, realistic pricing from the offset is important to secure a sale and will become even more so once the stamp duty holiday ends particularly if, as we expect, stock constraints begin to ease over coming months as those reluctant to sell while social distancing rules have been in place bring their homes to market.’

The survey was based on attitudes in the luxury homes market, defined as broadly the top 5 per cent by value. 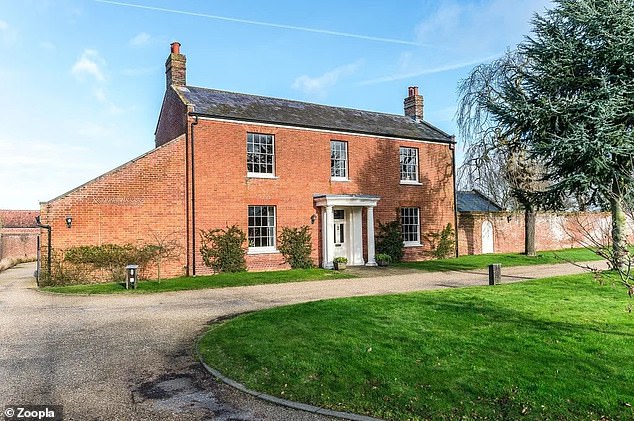 This nine-bedroom detached house in Sculthorpe, Norfolk, is for sale for £1.8million via Fine & Country estate agents

Mortgage experts explained how stamp duty isn’t a priority for buyers at the moment – although it is an attractive saving.

Tomer Aboody, of property lender MT Finance, said: ‘With house prices increasing at levels not seen in years, even if buyers miss the deadline and have to pay stamp duty, the increase in value of the property going forward could well outweigh this outlay.

‘Given the lack of property for sale, we are finding many buyers are simply grateful to find a suitable home to buy. Stamp duty isn’t the priority but the saving is a bonus.

‘Buyers’ desires have changed, from wanting and needing to be near the city in order to get into work, towards a more flexible outlook which enables them to work from home. This shift has had a huge impact on buyers wanting space, both internally and externally, with gardens and home offices at the top of the list.

‘In a best-case scenario, buyers will push through their purchase before the end of the month. But if that doesn’t happen they may be able to agree to split the difference with the seller.’