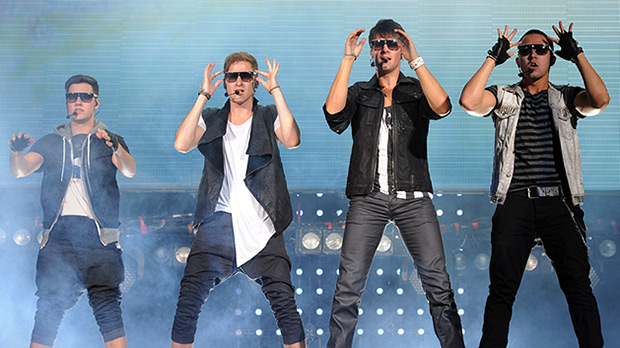 Fans of Big Time Rush are freaking out after the guys’ song was used in a hilarious viral video that appears to show a hip-hop group singing the words. Check it out here!

The creators of the YouTube channel, LongLiveServe, dropped an epic video on Dec. 26 that has Big Time Rush fans buzzing! In the vid, the former boy band’s song, “Boyfriend,” is used for a trap music video, with hip-hop singers lip-syncing along to the pop hit. The guys named the footage, “When the video doesn’t match the song,” and it quickly went viral on social media. Viewers are cracking up at the clip, but it also has Big Time Rush fans begging the guys to come back together for a reunion in 2019.

“A big time rush reunion would be 50x better than any kpop bulls***,” one person wrote. Someone else added, “We’re putting big time rush back on the map in 2019.” Interestingly, just days before this viral video went live, Big Time Rush Members Carlos PenaVega and Kendall Schmidt reunited to perform an acoustic version of “Boyfriend,” which has fans even more confident that plans for a reunion may be underway. “BTR reunion make it happen baby 2019,” one person wrote in response to the video. Naturally, hundreds of others were in agreement!

Big Time Rush formed in 2009 as part of a television show on Nickelodeon of the same name. Along with Carlos and Kendall, the group also consisted of Logan Henderson and James Maslow. The guys’ show aired until 2013, and the band continued performing until 2014.

Since the disbandment of Big Time Rush, the guys have all pursued solo careers. Kendall previously promised that they would come back together for a reunion at some point in the future, but so far, that has yet to happen.