HIAS, a nonprofit organization founded in the United States in 1881 as the Hebrew Immigrant Aid Society, was created to assist Jews fleeing persecution in Russia and Europe and has a long history of aiding refugees. HIAS has been in the news of late as the target of anti-Semitic and anti-immigrant conspiracy theories spread by alt-right extremists on the internet, including the alleged Pittsburgh synagogue gunman.

“CBS This Morning” co-host Bianna Golodryga has a personal connection to HIAS: It brought her family to the U.S. in 1980.

“I was just 18 months old when my family left the Soviet Union as political refugees,” Golodryga said. “We needed help resettling in the United States.” 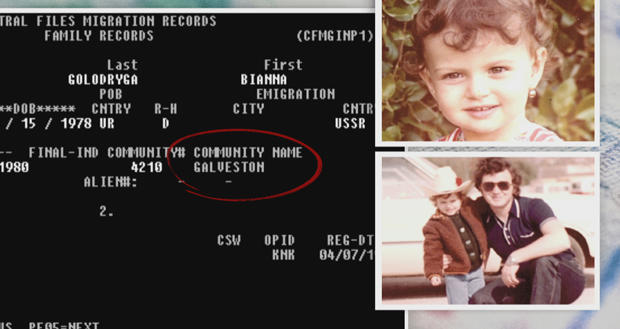 A copy of Bianna Golodryga’s information from the archives of HIAS. The agency helped her and her family emigrate from the Soviet Union when she was just 18 months old.

She said HIAS “helped many families like mine. I remember my parents every month, as much money as they could, maybe $20 a month, they would write checks to pay HIAS back for bringing us here. It’s helped millions of people like my family resettle, millions of Jewish refugees. It began in the 1880s to focus on Jewish refugees resettle around the world. Most recently it has expanded to helping refugees of all backgrounds.”

Golodryga grew emotional talking about how a HIAS archivist found the records of her family’s resettlement in Galveston, Texas. “It’s just such a personal story,” she said.

Reporting on the Pittsburgh shooting, in which 11 people at the Tree of Life synagogue were killed and 6 injured, Golodryga learned that the family of the synagogue’s rabbi had also been aided by HIAS in coming to the United States back in the 1920s.

She said, “This story hits close to home.”

HIAS is one of nine agencies that contracts with the State Department to help refugees of diverse backgrounds acclimate upon their arrival as part of the U.S. refugee admissions program. To date they have helped more than 4.5 million people resettle and find safety from persecution.