Bernardo Bertolucci, the Italian filmmaker whose sensual and visually stylistic movies ranged from intense chamber dramas to panoramic historical epics, died on Monday at his home in Rome. He was 77.

His death was confirmed by his wife, Clare Peploe, in a statement that did not specify the cause.

Mr. Bertolucci’s early work reflected the revolutionary spirit of the 1960s and ’70s, in particular the shifting social and sexual mores of the times. While several of his films delved into the traumas of his country’s recent past, he fashioned himself as a global auteur.

Coming of age as the Italian neorealist movement was on the wane, he drew inspiration from the French New Wave and routinely worked across borders and with international casts.

Many of Mr. Bertolucci’s films were warmly embraced by Hollywood. “The Last Emperor” (1987), a lavish biopic of Pu Yi, who became the emperor of China at the age of 3, won all nine Academy Awards for which it was nominated, including best picture and best director.

But Mr. Bertolucci’s best-known — and most controversial — film came earlier in his career: “Last Tango in Paris” (1972), an explicit depiction of the intense sexual relationship between a middle-aged American widower and a young Frenchwoman (played by Marlon Brando and Maria Schneider). A worldwide sensation and instant lightning rod, the film was lauded by some for pushing the boundaries of sexual representation, and denounced by others as misogynistic or pornographic.

“Last Tango” received an X rating, landed on the covers of Time and Newsweek, and earned $36 million at the United States box office alone. In Italy, the film was the subject of a protracted obscenity trial. In 1976, the Italian Supreme Court ordered all copies destroyed and handed Mr. Bertolucci a four-month suspended sentence.

Bernardo Bertolucci was born on March 16, 1941, in Parma, Italy, into an affluent, artistically inclined family. His father, Attilio, was a renowned poet and occasional film critic; his mother, Ninetta, taught literature. As a teenager, after the family had moved to Rome, he started making short films with a borrowed 16-millimeter camera. 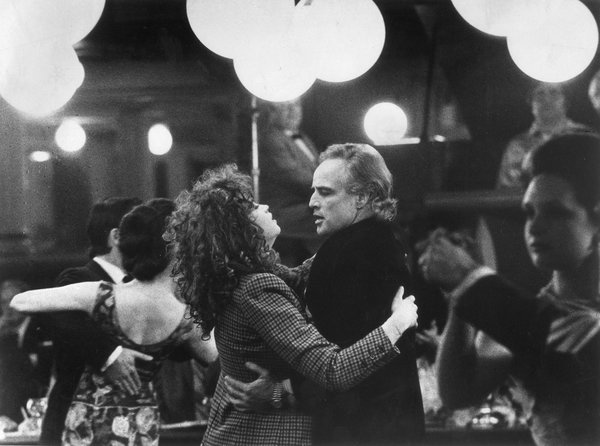 At age 20, Mr. Bertolucci dropped out of the University of Rome when the opportunity arose to assist a neighbor and family friend, Pier Paolo Pasolini, on the set of Mr. Pasolini’s first feature, “Accattone” (1961).

Despite early success as a poet — a collection of his poetry won the prestigious Viareggio Prize in 1962 — Mr. Bertolucci chose to devote himself to cinema. Expanded from a story treatment by Mr. Pasolini, his directing debut, “The Grim Reaper,” about the murder of a prostitute in a Roman park, premiered at the Venice Film Festival in 1962.

If his first feature carried inevitable shades of Pasolini, Mr. Bertolucci came into his own with his second, “Before the Revolution” (1964). Loosely based on the Stendhal novel “The Charterhouse of Parma,” it describes the struggle of a young man torn between his bourgeois background and his radical aspirations.

For Mr. Bertolucci, the character’s conflict mirrored his own. “I was a Marxist with all the love, all the passion, and all the despair one can expect from a bourgeois who chooses Marxism,” he said in a 1965 interview with the magazine Cahiers du Cinéma.

“Before the Revolution” anticipated Mr. Bertolucci’s interest in exploring the intersections of the personal and the political, while also establishing his knack for inscribing autobiographical references in films adapted from literary sources. While the Italian reviews were mostly negative, the film was championed by French critics, who identified Mr. Bertolucci as a fellow traveler of the French New Wave.

The love was mutual. Mr. Bertolucci, who spent a month in Paris attending screenings at the Cinémathèque Française as a high school graduation gift, insisted on doing early interviews in French, which he called “the language of cinema.”

Even more than Mr. Pasolini, Jean-Luc Godard was an important early influence. Mr. Godard looms large over Mr. Bertolucci’s third, and most experimental, feature, “Partner” (1968), a reworking of Dostoevsky’s “Double,” in which a young man encounters his revolutionary doppelgänger.

In what he described as a pivotal moment in his creative life, Mr. Bertolucci began Freudian analysis in 1969. He spoke often and openly about the process, describing himself in a 1977 interview with The Washington Post as “a repressed person” who “can express my energy, my libido, my aggression, only in my work.”

Many of Mr. Bertolucci’s films — which abound with father figures, Oedipal conflicts, identity confusion and dream logic — are ripe for psychoanalytic readings. The two films that he made in quick succession after entering analysis, both tackling Italy’s Fascist history, were breakthrough works that are often ranked among his most enduring achievements.

In “The Spider’s Stratagem” (1970), adapted from a Borges story, a young man investigates the death of his father, a resistance leader. Through formal devices — the same actors appear in both past and present-day sequences — the film creates a disorientingly fluid sense of time and underscores the persistence of history.

Using an even more intricate flashback structure, “The Conformist” (1970), set during the Mussolini era and based on a novel by Alberto Moravia, connects the Fascist mind-set with repressed sexuality. The protagonist (Jean-Louis Trintignant) is a closeted man who, in his desperate bid for normalcy, marries, joins the Fascist Party, and agrees to assassinate a former professor.

“The Spider’s Stratagem” and “The Conformist” marked the beginning of a long collaboration with the cinematographer Vittorio Storaro, whose work was notable for its expressive lighting and sinuous camera movement, and who contributed to Mr. Bertolucci’s reputation as a visual stylist.

A lifelong leftist and a member of the Italian Communist Party in his 20s and 30s, Mr. Bertolucci began to question the viability of political filmmaking as his work grew more popular. “You cannot make political films in a commercial situation,” he said in an interview with The New York Times in 1973. “The more revolutionary the film, the less the public would accept it.”

With “Last Tango in Paris,” he moved away from the questions of political idealism and guilt that had preoccupied him and toward the sexual revolution then unfolding. In interviews at the time, he referred to sex as “the only thing that still seems true” and “a new kind of language.”

Other reviewers were more skeptical. Citing the abundance of female nudity, Judith Crist, writing in New York magazine, placed it in “the male-chauvinist tradition.” Grace Glueck, in The New York Times, dismissed it as “the perfect macho soap opera.”

For Mr. Bertolucci, the film was less about liberation than regression. “At the end he’s a fetus,” he said of the Brando character in an interview with Rolling Stone magazine.

Although its shock value has faded with time, “Last Tango in Paris” retained its capacity for controversy long after its release. Ms. Schneider, who was 19 during the shoot, later described the filming of the notorious rape scene — in which Mr. Brando’s character sodomizes her character — as a traumatic experience.

Mr. Bertolucci came under fire for comments in a 2013 interview in which he revealed that Ms. Schneider, who died in 2011, was not told that Mr. Brando would use butter as a lubricant in that scene of simulated sex, saying he “wanted Maria to feel, not to act, the rage and the humiliation.”

The success of “The Conformist” and “Last Tango” allowed Mr. Bertolucci to embark on his most ambitious film, “1900,” a multigenerational family saga about the class struggle with a large international cast including Robert De Niro, Gérard Depardieu, Burt Lancaster, Donald Sutherland and Dominique Sanda.

Tracing the entwined destinies of two men born on the same day at the dawn of the 20th century — one a peasant, the other an aristocrat — the film follows its characters through several decades of Italian political and social upheavals.

Mr. Bertolucci unveiled a five-and-a-half-hour cut at the Cannes Film Festival in 1976 to mixed reviews. After a public dispute with the distributor, Paramount, and his producer, Alberto Grimaldi, over the running time, Mr. Bertolucci relented and produced a four-hour version for American release the following year.

In 1978, Mr. Bertolucci married Clare Peploe, who had worked with him as an assistant director on “1900.” He wrote his next film, “Luna” (1979) — about an opera singer (Jill Clayburgh) and her teenage son — with Ms. Peploe and his brother, Giuseppe. “The Tragedy of a Ridiculous Man” (1981), about a wealthy man forced to renounce his worldly possessions to recover his kidnapped son, won Ugo Tognazzi the best actor prize at Cannes.

Capitalizing on the vogue for historical prestige pictures, Mr. Bertolucci shifted back into epic mode with “The Last Emperor,” the first Western feature granted permission to film within the Forbidden City in Beijing.

While the film plays out against China’s tumultuous passage from feudalism to communism, Mr. Bertolucci conceded that his primary interest was less in historical events than in the psyche of his passive protagonist, who was re-educated during the Cultural Revolution and died a humble gardener.

Mr. Bertolucci’s next two films came to be bracketed with “The Last Emperor” as his “Eastern trilogy.” (All three were co-written with the screenwriter Mark Peploe, his brother in law.) “The Sheltering Sky” (1990) was based on a Paul Bowles novel about Americans adrift in North Africa. “Little Buddha” (1993) told the dual stories of the life of Siddhartha and of an American boy who may be the reincarnation of a Buddhist lama.

Most of Mr. Bertolucci’s later films concerned characters who have shut out the world around them, as foreshadowed by the lost souls of “Last Tango in Paris.”

“Stealing Beauty” (1996), about the sexual awakening of an American teenager, was set among the artistic habitués of a Tuscan villa. The action in “Besieged” (1998) was confined mainly to the Roman home where a refugee from an unnamed African country works as a maid for a reclusive pianist.

Slowed by poor health and back problems, Mr. Bertolucci directed his final film, “Me and You” (2012), from a wheelchair. Another intimate drama, it revolved around a troubled adolescent hiding out in a basement with his half sister.

For Mr. Bertolucci the growing insularity of his work was less a result of a narrowing worldview than a reflection of the world he saw around him.

“Politics was part of our life,” he told The Hollywood Reporter in 2014. “People don’t seem involved or passionate anymore; politics is something distant.”

An earlier version of this obituary misspelled the surname of an actor in Mr. Bertolucci’s film “The Tragedy of a Ridiculous Man.” He is Ugo Tognazzi, not Tonazzi.