2019 is a year of announcements ice cream-related announcements — we’ve had new dairy-free options from iconic brands, we’ve had new flavors mixing up desserts on top of desserts, and heck, we even had BuzzFeed coming out with its own line of ice creams. But today, Ben & Jerry’s has finally done it. Mark you calendars and search for your nearest scoop shop, because Ben & Jerry’s Free Cone Day 2019 has been announced, and it’s taking place on April 9.

In a press release, the Vermont-based ice cream chain announced its annual celebration of free dessert as taking place a little under a month from now. On Tuesday. April 9, you can expect a bit of a wait in your quest to satisfy your sweet tooth. Free Cone Day is LEGENDARY. This year it is particularly special as 2019 marks the 40th anniversary of of the event. According to a neat timeline on the Ben & Jerry’s website, the first Free Cone Day was celebrated in honor of the one year anniversary of the shop’s grand opening. If you didn’t catch that: Free Cone Day is almost as old as Ben & Jerry’s itself. Talk about a reason to celebrate.

And in case that wasn’t enough of one? Ben & Jerry’s confirms in its press release that you can get in line however many times you want. That means you don’t even have to pick a flavor — you can try one, then get right back in line for a second! 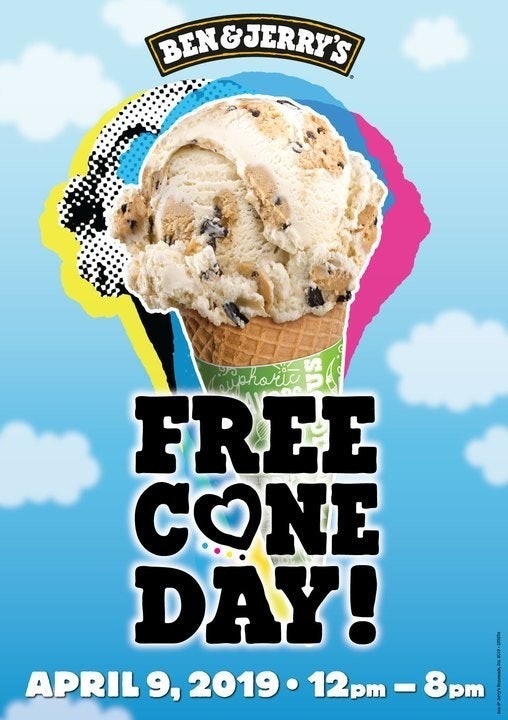 If you haven’t had a Ben & Jerry’s scoop recently, you might be surprised to learn just how many new, original flavors the brand has released. Right now there are six pints listed on its website as "new". The Pecan Sticky Bun flavor is a base of brown sugar ice cream with pecans, sticky bun dough, and a cream cheese frosting swirl. The Glampfire Train Mix flavor is chocolate ice cream with pretzels, marshmallow. and fudge-covered almonds. The most recent addition, a tribute to musician Bob Marley, is Banana ice cream with fudge peace signs and gram cracker and fudge swirled throughout, which fans recently voted back from the Ben & Jerry’s flavor graveyard. You can also expect to find mainstays like chocolate chip cookie dough, Chunky Monkey, Phish Food, and Cherry Garcia, naturally. 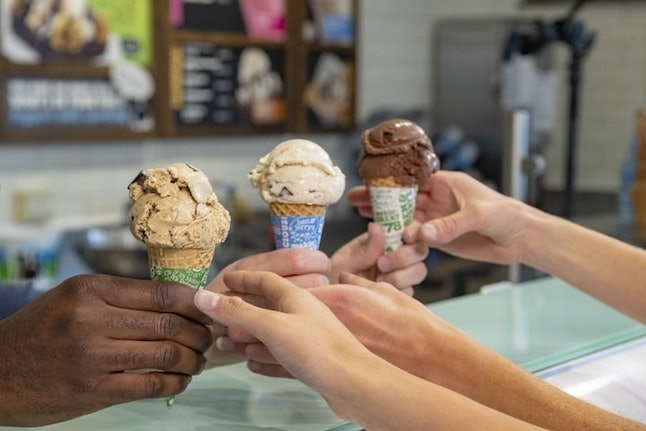 Ben & Jerry’s scoop shops aren’t very common where I live, but when I was attending college, I lived fairly close to one in Washington, D.C. Since my friends and I were pursuing degrees on how to obtain free food at any given opportunity, Free Cone Day was like Christmas. We’d wait outside Ben & Jerry’s on M St. in Georgetown for as long as it took to get a scoop of that sweet, sweet cookie dough. One year I was the last to be served, and was given some extra; it sparked more joy than anything that has happened since.

The ice cream brand announced something else today that will also spark joy — longtime champions of civic action and social justice, Ben & Jerry’s will be accompanying the American Civil Liberties Union (ACLU) on eight of its stops during the upcoming nationwide tour. Between now and May, If you live in Los Angeles, Oakland, Cleveland, Atlanta, Miami, Washington, or NYC, you can enjoy a scoop of your favorite flavor as you learn about the work the ACLU does to ensure every person in the country has equal rights.

But while you’re marking those days down on your calendar, don’t forget to put all the highlighter on April 9 — Free Cone Day is not one to miss.