The votes are in and this time we don’t have to worry about what it means for all of our futures — hurray! Instead of politics, this time the votes are about ice cream (and still a little bit about politics), and after offering fans the chance to bring back a flavor, Ben & Jerry’s Bob Marley ice cream has beaten out the competition. Bob Marley’s One Love is returning for a limited time to supermarket shelves, Ben & Jerry’s shops, and to the brand’s online store.

The popular flavor features banana ice cream with a caramel and graham cracker swirl and fudge peace signs. As reported by Chew Boom, One Love was initially released in the U.K. in 2016 and then in the U.S. in 2017. Now, it’s been resurrected from the Flavor Graveyard, which is a very real thing, but if you can’t visit it in person, you can check out the most missed flavors of the Flavor Graveyard online. After voting ended, One Love began appearing in stores again on December 13, but if you order from the Ben & Jerry’s website, it will be shipped starting on December 24.

One Love is made in partnership with the Marley family and a portion of the proceeds benefit the Bob Marley Foundation’s One Love Youth Camp, "an annual camp that helps promote youth empowerment and social change in Jamaica," according to the Ben & Jerry’s website. You can find out where you can buy it in person here or order online here. 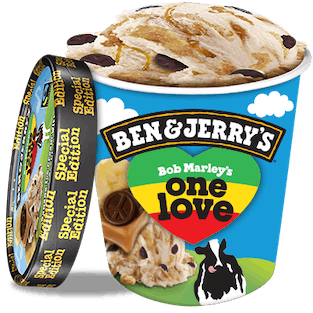 In honor of the flavor returning, a couple young members of the Marley family showed off a recipe you can make with the ice cream. In the video below, Judah and Gideon Marley, two of Ziggy Marley’s children and Bob Marley’s grandchildren, make banana pancakes using melted One Love ice cream. It’s very cute, and the pancakes actually look really good considering an entire pint of melted ice cream is in them. (The full recipe is available on the Ben & Jerry’s site.)

One Love is not the only current Ben & Jerry’s ice cream supporting a good cause, which should come as no surprise to anyone who knows anything about the brand and the men who started it. Ben & Jerry’s released Pecan Resist a week before the mid-term elections. This flavor is all about resisting the Trump administration’s regressive ideas, and specifically, is in support of four progressive organizations: Color of Change, Neta, Honor the Earth, and Women’s March. This flavor is also all about chocolate ice cream with white and dark fudge chunks, pecans, walnuts, and fudge-covered almonds.

As always with Ben & Jerry’s there are plenty of flavors to choose from, but right now, it’s time for the One Love lovers to have their moment in the spotlight. You did it, guys. Your votes really counted. (Maybe next time, Wavy Gravy fans.)