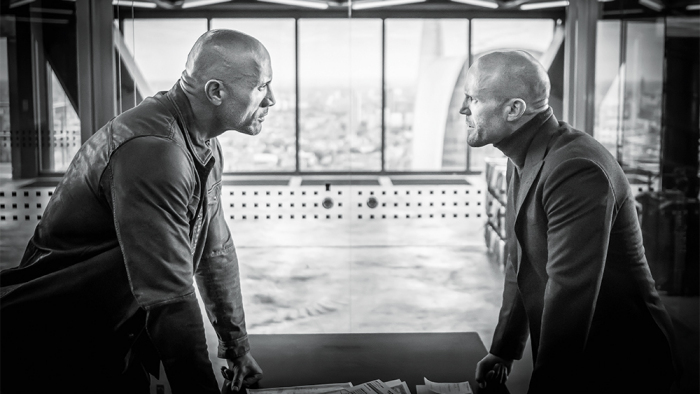 Universal had been pondering a “Fast & Furious” spin-off for several years, kicking around various ideas. But it was fan reaction to the antagonistic comedic interplay between unlikely allies Luke Hobbs (Dwayne Johnson) and Deckard Shaw (Jason Statham) in the eighth installment of the franchise, 2017’s “The Fate of the Furious,” that finally moved execs to make “Fast & Furious Presents: Hobbs & Shaw,” set for release on Aug. 2.

“Audiences loved the back-and-forth banter between these two guys who were always at each other’s throats, but ultimately striving for the same goal,” says Hiram Garcia, president of production for Johnson’s Seven Bucks Prods. and one of the film’s producers. “They tested through the roof.”

Garcia says the idea was to take the buddy-cop dynamic of ‘80s hits including “48 Hours,” “Lethal Weapon” and “Tango & Cash” and marry it to the over-the-top action and spectacle fans have come to expect from the “Fast” franchise.

In the new film, Hobbs, a Diplomatic Security Service agent, and Shaw, a former British military operative, reluctantly reteam to take on Brixton Lore (Idris Elba), a genetically enhanced anarchist who gets his hands on a bio-threat that could alter humanity.

The resulting movie manages to be both its own original franchise and still “feel like it’s connected to the ‘Fast’ universe in an organic way,” says Peter Cramer, president, Universal Pictures.

Unlike a typical “Fast and Furious” film, which has roughly a half-dozen protagonists, “Hobbs & Shaw” has only two.

That gave the filmmakers time to more deeply explore the relations of Hobbs in Samoa (Johnson is part Samoan) and Shaw in England. The second part includes Shaw’s sister Hattie (Vanessa Kirby), an MI6 field agent who helps them take on Lore.

“You’ve been watching Luke Hobbs since ‘Fast Five,’ and other than knowing that he has a daughter, you never really knew anything about his family,” points out Garcia.

“Deadpool 2” director David Leitch took on helming duties for the movie, which shot in London, Glasgow and the Hawaiian island of Kauai (standing in for Samoa). One of the biggest challenges for the producers was simply finding a space in Johnson’s schedule between two other movies (“Jungle Cruise” and “Jumanji: The Next Level”), bookended by two seasons of HBO’s “Ballers.”

According to screenwriter Chris Morgan, who’s been a mainstay of the franchise since the third film (2006’s “The Fast and the Furious: Tokyo Drift”), the scripts for “Fast” evolve throughout production.

“There are discussions constantly, where people are looking to make it better,” says Morgan, also a producer on the movie. On “Hobbs & Shaw,” which he co-wrote with Drew Pearce, “it was fun just sitting in the trailer and coming up with lines for Hobbs.”

Johnson will not be appearing in “Fast & Furious 9,” due for release on May 22, 2020. And while it has been reported that the “Fast” franchise, which has earned close to $5 billion worldwide to date, will conclude with a 10th installment, nothing is written in stone.

“We’re looking at a couple of other characters spinning off into their own franchises,” says Cramer.