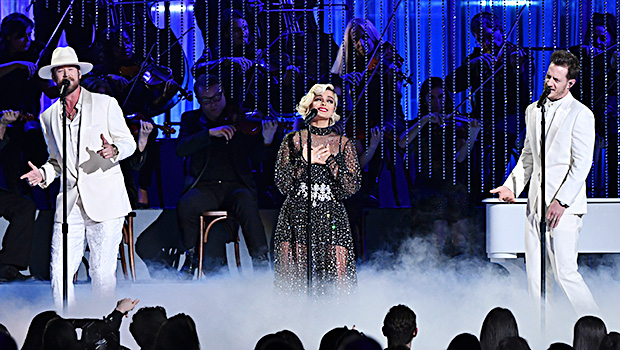 We stan! Bebe Rexha and Florida Georgia Line took the 2018 CMAs by storm with an angelic, orchestral performance of ‘Meant to Be’. Watch it here!

Just a week after she slayed “I’m A Mess” at the EMAs, Bebe Rexha brought it again for the 2018 Country Music Association Awards! Bebe teamed up with Florida Georgia Line for an explosive performance of their hit “Meant to Be”. Called one of the biggest country hits in recent history, Florida Georgia Line and Bebe certainly proved why during the Nov. 14 show. After the two country studs came out all dressed in white, Bebe soon joined them in a dress that sparkled like a diamond. She seemed heaven-sent, and together, the three performed a heavenly version of their beloved song.

It’s not just fans that think “Meant to Be” is incredibly powerful. Bebe said that recording the song helped her through a difficult time in her life. “I’ve recently been going through heartbreak, and I listen to the song, and it makes me feel better and like there’s some type of destiny and if something doesn’t work out then, there’s something better waiting for you,” she told Billboard last year ahead of the AMAs. “I think that’s something we need more than ever with all the events going on in the world. People want to feel safe and like everything’s going to be OK.”

The song almost didn’t happen, according to Bebe! It was Tyler Hubbard‘s wife who made it all happen. When the trio were about to give up writing and recording, she took Tyler aside and said it would come to them if it was “meant to be.” Genius! Good thing they listened to her, because “Meant to Be” now claims the title of the longest-running chart-topper on the Billboard Hot Country Songs chart in history!!

“I think this song has a really powerful, universal message that fans are connecting with. It shows me that this song is anointed by the best writer there is, the Lord,” Tyler told E! News. “With every unexpected surprise in the ‘Meant to Be’ story, God was showing himself to be stronger than any tradition or genre.”