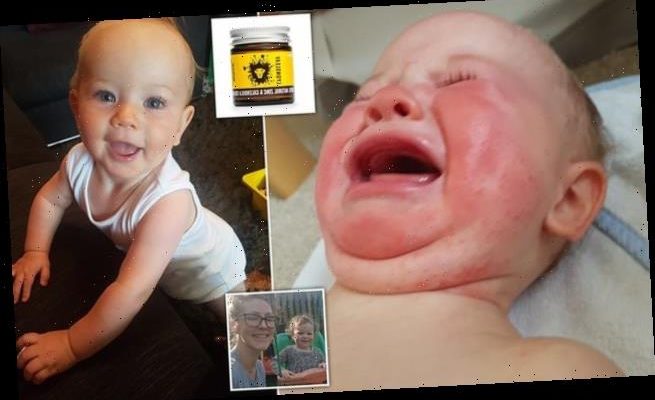 Mother whose baby’s eczema was so bad her skin looked ‘sunburnt’ and ‘blistered’ reveals how the condition cleared in just 48 HOURS thanks to £10.95 over-the-counter cream

A mother who was distraught when eczema caused her baby’s skin to look as if it was ‘on fire’ for nine months has claimed how a £10.95 cream made the condition disappear within 48 hours.

Gemma Gilbert, 35, from Wirral, Merseyside, gave birth to Ayla in August 2019 and within a few weeks noticed her skin starting to redden.

By six weeks, the mother became very concerned by her daughter’s ‘raw’ appearance and spoke to health professionals who diagnosed her with eczema.

Having tried to adapt Ayla’s diet to avoid using the ‘harsh’ creams prescribed for the condition, Gemma revealed her last ditch effort to try the Lyonsleaf Zinc & Calendula Cream she had used on herself while pregnant, and claimed it worked ‘like magic’ to heal Ayla’s skin. 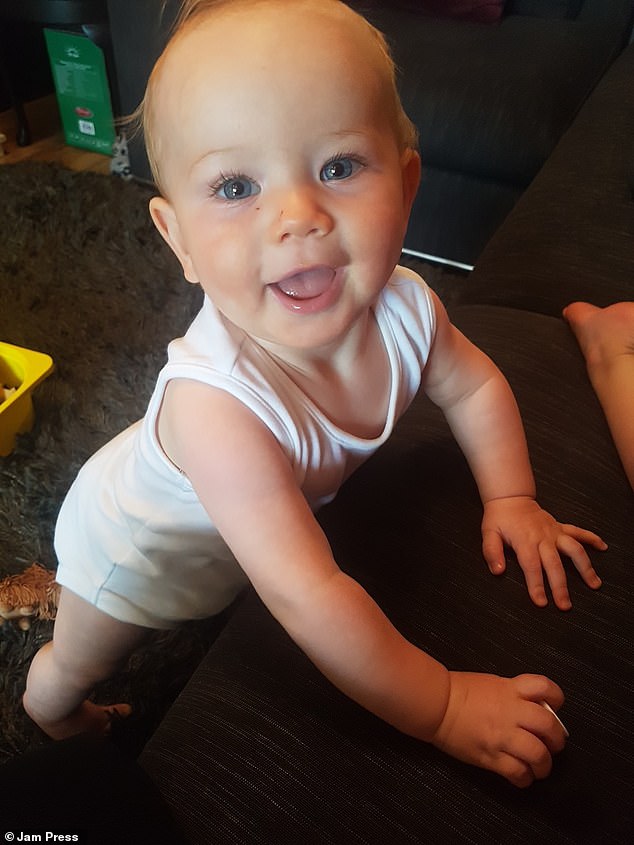 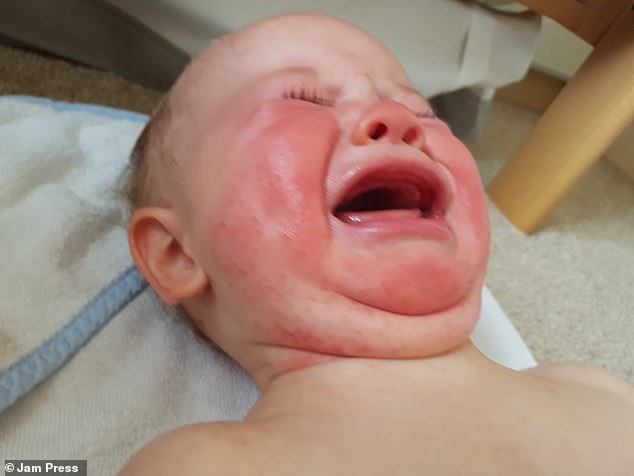 Gemma said Ayla’s skin began to redden within weeks of being born and her poo was also a strange consistency. Pictured: Ayla suffering with eczema

She recalled her initial concerns about Ayla, saying: ‘It looked sunburnt and was blistering.

‘I knew she was reacting to something because her poo was a weird consistency and green, which I knew to be a common indicator of an intolerance.

‘I assumed the skin issue was linked, so for a long time I was racking my brains trying to cut foods like dairy from my diet while breastfeeding her.

‘I found that she was reacting to soy quite early on – because her nappies got better – but her skin didn’t. Nothing seemed to help.’ 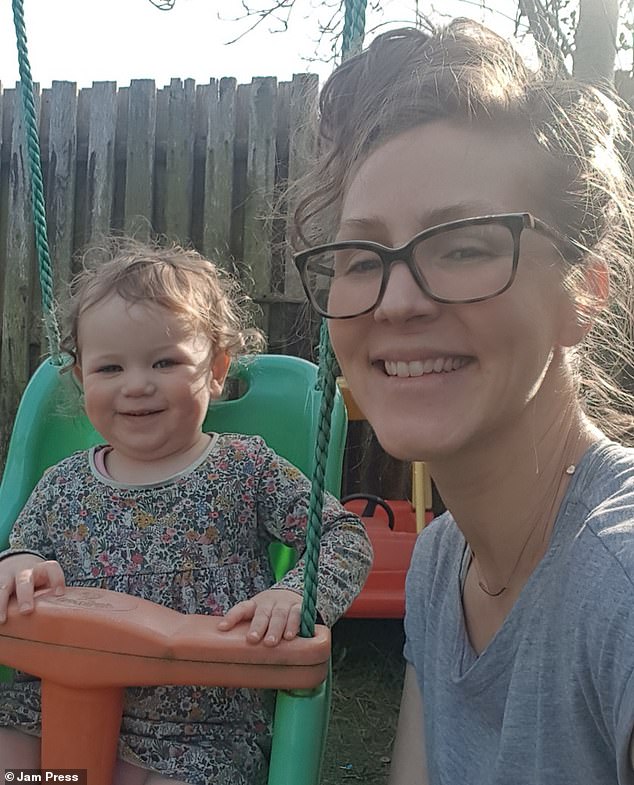 Gemma said Ayla (pictured together) would rub her head into her chest and try to scratch herself, while coping with painful blotches

Although some days her skin would be calmer, poor Ayla often had ‘fiery’ blotches on her cheeks and forehead, with the pain often reducing the toddler to tears.

‘It was clearly really bothering her – she would rub her head into my chest and shoulder to try and scratch herself,’ explained Gemma. ‘It was heartbreaking seeing a tiny baby trying to itch her forehead on me.

‘She would scratch it and cut it open – it was flaky so the skin would open easily. 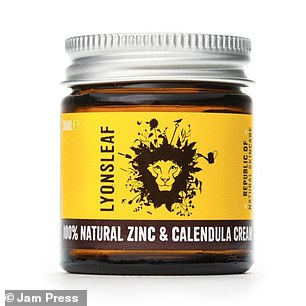 ‘I tried to keep her hands covered with scratch mitts and kept her nails as short as possible, but I felt mean not letting her scratch an itch.

‘It was a really tough time and I was desperately wanting to know what the cause was.

‘I just wanted to wrap Ayla up and keep her safe.

‘I knew there must be a reason behind her sore skin and I felt responsible because I was breastfeeding her, so I was feeling guilty too.’

Gemma spoke to a health visitor when the problem continued as Ayla hit six months, and was advised to see her GP for a referral to a dietitian.

She had appointments with two different doctors in the following two months, who both said it was eczema and prescribed Ayla with paraffin-based creams and steroids. 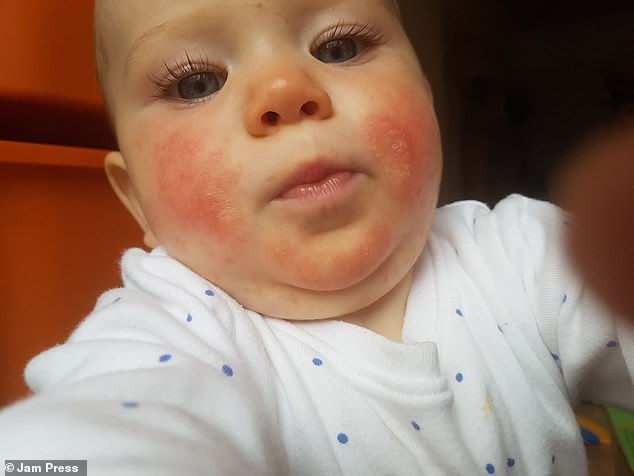 Ayla was diagnosed with eczema and prescribed paraffin-based creams and steroids after being examined by two different doctors. Pictured: Ayla suffering with eczema 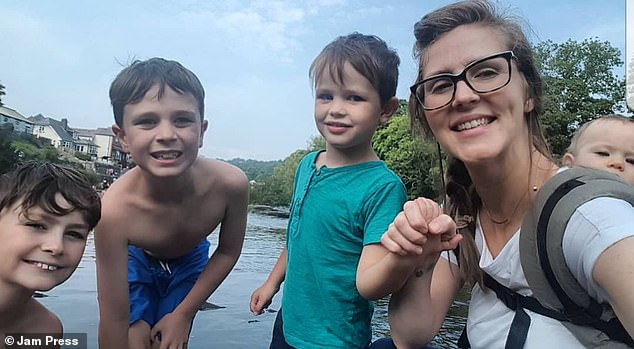 Gemma tried to cut allergens from Ayala’s diet as a ‘natural remedy’ to improve her skin, however the tot continued to have flare ups. Pictured: Gemma with Ethan, Isaac, Cole and Ayla

Preferring not to use the ‘harsh’ creams on her daughter’s skin if possible and convinced the issue was diet-related, Gemma continued to cut allergens and hoped for a breakthrough.

‘I always look for a more natural remedy first and so I tried anything with natural oils to soothe her skin, trying creams from different makes,’ she said.

‘I wasn’t getting anywhere with the doctors and didn’t want to use the products they were offering, so there wasn’t much point in continuing to go.

‘I wanted to find creams with natural ingredients to help her skin while I continued to search for the cause.’

Gemma decided to scrutinise Ayla’s diet and ensure that she was getting enough nutrients, after noticing the creams she tried weren’t having much impact. 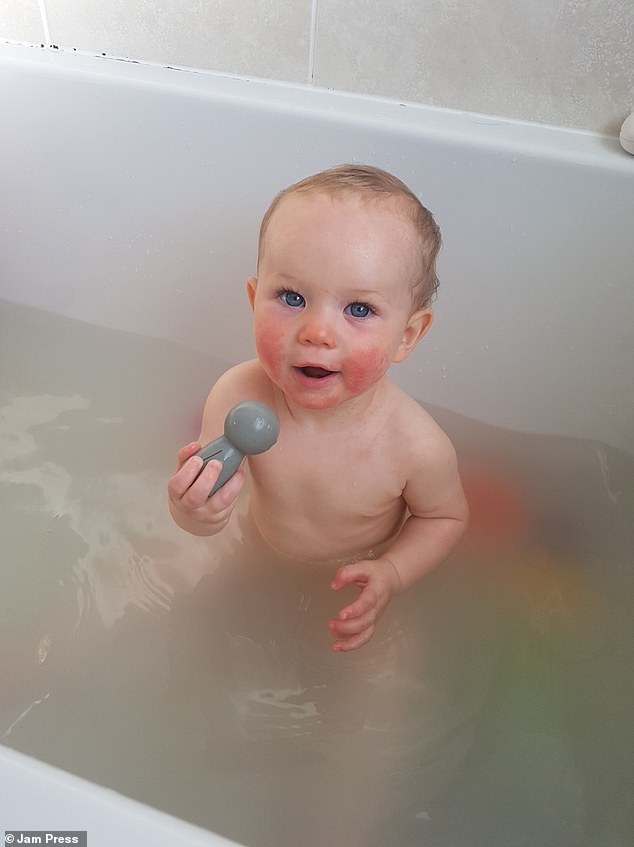 Gemma said she realised Ayla’s skin would react after she ate tomatoes. Pictured: Ayla suffering with her eczema 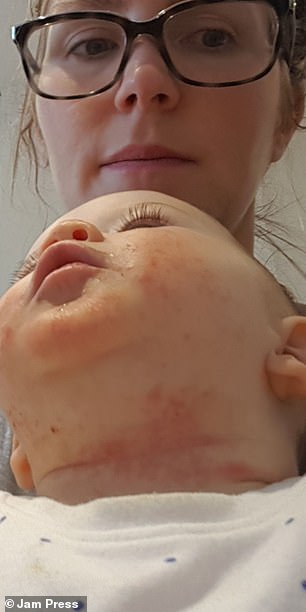 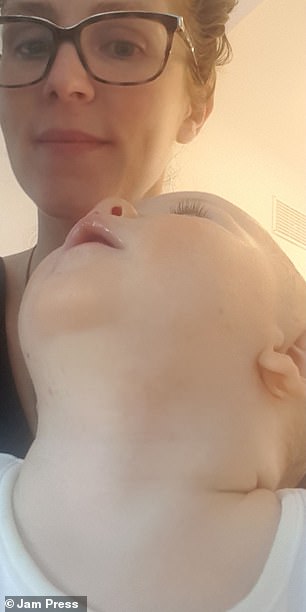 Gemma decided to try Lyonsleaf Zinc & Calendula Cream after searching through her collection of creams and ointments. Pictured left: Ayla before and right after

‘I realised four months ago that tomatoes were having a huge effect on her skin,’ Gemma said.

‘It was hard to pinpoint as they are in so much but I started to notice how quickly she would flare up afterwards.

‘I suspected it could be tomatoes for a while and was avoiding them, but she sneaked a bite of one from the fridge once and very quickly her mouth turned spotty, which confirmed it to me.’

Ayla’s skin improved after she firmly cut tomatoes out of her diet, however it still continued to flare up occasionally when she was nine months old.

In a last-ditch attempt to soothe her skin, Gemma searched through her collection of creams and ointments and remembered the Lyonsleaf Zinc & Calendula Cream she had used on herself for dermatitis when she was pregnant with her daughter.

She claimed: ‘It worked so fast, it was like magic. 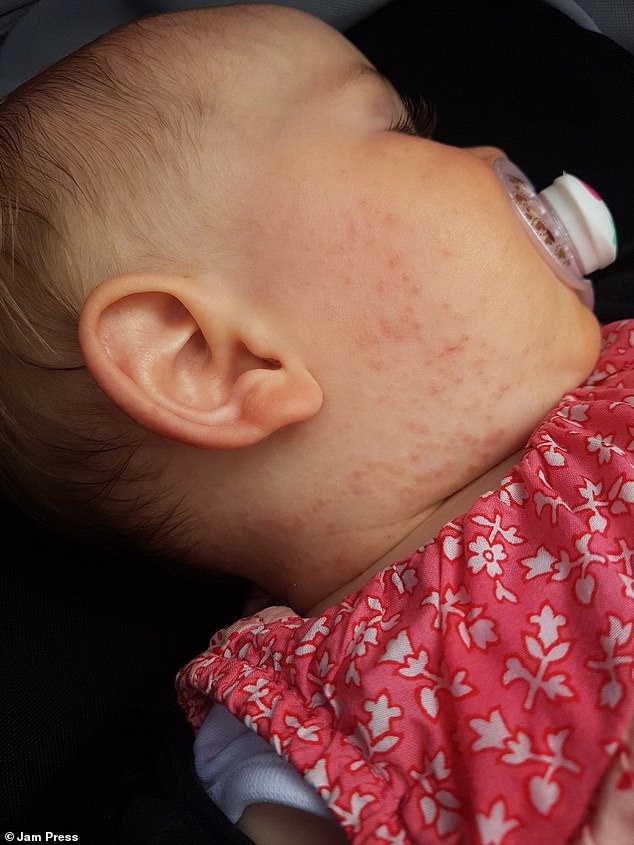 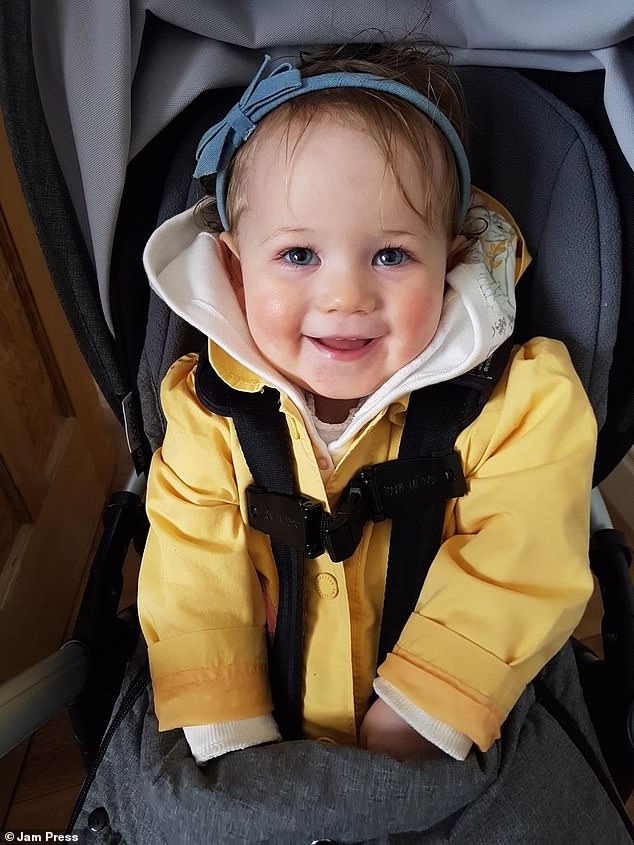 ‘I took pictures of her skin two days apart – both taken while we were having breakfast – and it wasn’t until I looked back at the first picture that I saw the difference.

‘I was gobsmacked and it was such a weight off my mind to know something with natural ingredients would help her skin so quickly during a flare-up.’

Gemma now uses Lyonsleaf products on Ayla’s skin most days to maintain it and says overall her skin is much better.

She added: ‘Most people would never know something was wrong, but it isn’t perfect so I think there is probably an underlying cause.

‘But after seeing her struggle so much when she was little, it’s just a relief to see her doing so much better now.’