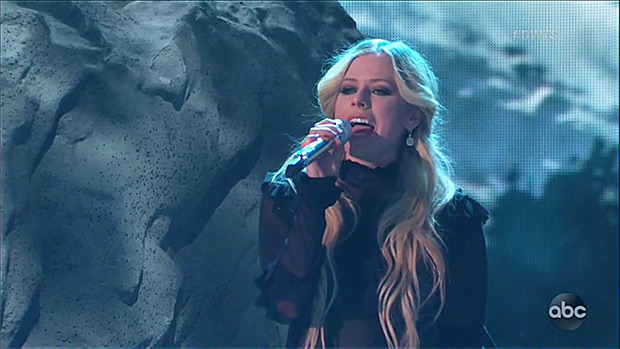 Alexis Ren and Alan Bersten had a very special guest accompanying them during the ‘DWTS’ finale on Nov. 19 — Avril Lavigne! The singer performed her newest single, ‘Head Above Water,’ on the show, and totally nailed it!

Avril Lavigne gave a gorgeous performance of her newest song, “Head Above Water,” during the Dancing With The Stars finale. She took the stage during Alexis Ren and Alan Bersten’s freestyle dance, and was the perfect addition to their final dance of the season. Alexis decided to go on DWTS because it was her late mother’s favorite show, and this emotional performance was a great way to honor her mom. “I miss her so much,” Alexis said in her pre-taped package. “She would just tell me how proud she was of me and she’d be so excited to go to the show. I just get to dedicate this whole experience to her. I’m so proud to be her daughter.”

Avril released her single “Head Above Water” in Sept. 2018 — her first new song in three years! When she released the song, Avril opened up about her difficult struggle with Lyme disease over the last few years, and got super vulnerable about all she went through. “Those were the worst years of my life as I went through both physical and emotional battles,” she admitted. “I was able to turn that fight into music I’m really proud of. I wrote songs on my bed and on the couch and recorded there mostly, as well. Words and lyrics that were so true to my experience came pouring out of me effortlessly.”

“Head Above Water” is obviously an emotional song, which went well with Alexis and Alan’s journey on the show this season. They started out as friends, but slowly started developing feelings for each other as the weeks went on. About midway through the season, they shared their first kiss on-camera, and their chemistry has been evident week after week.

Alan and Alexis are up against Evanna Lynch/Keo Motsepe, Sharna Burgess/Bobby Bones and Milo Manheim/Witney Carson in the finale. A winner will be crowned by the end of the Nov. 20 episode.