A Chinese fighter jet performed a “dangerous manoeuvre” close to an Australian surveillance aircraft in a recent mid-air incident over the South China Sea. 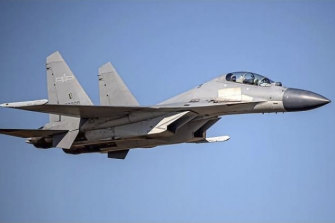 The surveillance aircraft was intercepted by a Chinese J-16 fighter jet. Credit:AP

“The intercept resulted in a dangerous manoeuvre and conduct that threatened the safety of both the Australian aircraft and crew,” he said on Sunday.

On May 26, a RAAF P-8 aircraft performing routine surveillance was intercepted by a Chinese J-16 fighter jet in international airspace in the South China Sea region.

Marles said the fighter jet first flew very close to the side of the surveillance plane and released flares.

“The J-16 then accelerated and cut across the nose of the P-8, settling in front of the P-8 at very close distance,” he said.

The fighter then released “a bundle of chaff”, which included small pieces of aluminium. Some of that chaff entered the engines of the surveillance plane. 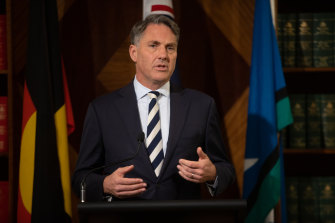 Defence Minister Richard Marles said the safety of the aircraft and crew had been put in jeopardy.Credit:Simon Schluter

“Quite obviously, this is very dangerous,” Marles said.

The defence minister said the crew responded professionally and returned the aircraft to base and all crew were unharmed. He has directed the Chief of the Defence Force and the Department to express concerns over the incident to Chinese authorities, particularly stressing the safety of the aircraft and crew had been put in jeopardy.

“The activity of the P-8 form part of maritime surveillance activity which has been undertaken by Australia in the South China Sea for decades – other countries do the same,” Marles said.

Defence said Australia has done maritime surveillance in the region for decades and obeys international law, “exercising the right to freedom of navigation and overflight in international waters and airspace”.

The incident comes just three months after a Chinese navy vessel aimed a military-grade laser at another Australian surveillance aircraft in the Arafura Sea between the Northern Territory and Papua.

The February incident risked the lives of the aircraft crew, Defence said, strongly condemning the “unprofessional and unsafe military conduct”.

This week Chinese Foreign Minister Wang Yi finished his tour of the Pacific, ending in East Timor and Papua New Guinea after signing bilateral agreements with countries including the Solomon Islands.

Speaking to media including the ABC in PNG, Wang said a reset in the China-Australian relationship would require concrete action.

“[Our] Australia ties have run into difficulties in recent years. The crux of the problem lies in the fact that some political forces in Australia insist on treating China as an adversary rather than a partner, and in portraying China’s development as a threat rather than an opportunity,” he said.

“Such moves have led to a significant reversal of Australia’s positive and pragmatic China policy pursued for many years.“