As far as high school reunions go, this one was bittersweet. When Jo Dyer’s old friend Kate got back in touch nearly 30 years after they drifted apart, she had a specific reason in mind.

Kate had decided in mid-2019 she was ready to deal with a trauma she said had haunted her over the decades, Ms Dyer says, and wanted friends who knew her as a teenager to support her. 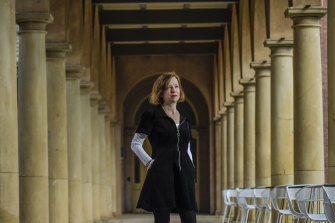 Jo Dyer feels that she and other friends of the woman who has accused Christian Porter of a decades-old rape have been entrusted with her story. Mr Porter strenuously denies the allegations.Credit:Roy VanDerVegt

“She was assembling her army, if you like,” Ms Dyer, now the director of the Adelaide Writers’ Week, says of her friend.

“She was developing a strategy in a very clear-eyed and lucid way. She’d got a great legal team together, she’d prepared her statements … she’d had preliminary meetings with the police. So she was ready to go.”

The story Kate told Ms Dyer and the circle of friends she reunited with alleged she was raped by federal minister Christian Porter in 1988, when they were both teenagers taking part in debating competitions.

Mr Porter strenuously denies the allegation. He took defamation action against the ABC for a story it published in February revealing the allegation but the case was settled after mediation.

Ahead of the case, Ms Dyer won a court order to prevent Mr Porter’s high-profile barrister, Sue Chrysanthou SC, from acting for him in the defamation proceedings. Ms Dyer herself has since threatened to sue Mr Porter for defamation.

Kate met with NSW police in February 2020 but had not given a formal statement by the time she died by suicide in June 2020. Police closed their investigation because there was insufficient admissible evidence to proceed.

Ms Dyer wants an independent inquiry and says she and other friends of Kate are prepared to keep fighting for one.

“We’re left on this sort of the wrong side of the looking glass,” she says.

“Kate is not here any more but she did entrust her story to us. That’s what she did, she sought us out. And so we will keep telling it until there is some modicum of responsibility and accountability taken.”

Other supporters include writer Nick Ryan, who was also in the debating scene. Macquarie Group senior managing director James Hooke has given a statement to police about discussions he had with Kate when they dated in the years after the alleged assault.

Kate’s family have said they would back any inquiry that would potentially shed light on her death.

For Ms Dyer, Kate’s allegation came out of the blue, although she says others knew of it earlier.

Ms Dyer describes their reunion as bittersweet, reliving stories good and bad from a pivotal time of their lives. They were part of a tight-knit community of high school and university debaters, travelling the country for competitions and forging intense friendships.

“There we were at these debating championships, all flying high and kind of stupid with confidence,” Ms Dyer says. “I guess the thing that really struck me when hearing her story was just the profound injustice overall, that here we were readying to take off and it was at that time that Kate’s suffering began.

“The emotions of those friendships do stay with you, even if the relationships fall away as you move on, and you get older and life gets in the way.”

She believes Kate chose people she had been closest with, partly in a strategic move about who she thought would step up for her but partly based on the powerful emotions they shared.

For Ms Dyer, supporting her friend is both very personal and broadly political, in a cultural rather than a partisan sense.

One point in Ms Dyer’s legal proceedings that came under intense scrutiny was Ms Dyer telling the court Kate believed it would be a measure of her success if Mr Porter didn’t become prime minister.

Ms Dyer insists the accusation that she and Kate’s supporters are somehow out for blood is a misrepresentation.

The comment about thwarting political ambitions came because Kate was “clear-eyed about the [unlikely] prospects of a conviction” with very few allegations of sexual assault proceeding to trial and even fewer ending with guilty verdicts.

Now the possibility of Mr Porter taking the stand in the defamation case has vanished, Ms Dyer and Kate’s backers have renewed their call for an independent inquiry, confidential or open.

The South Australian coroner is still considering whether to hold an inquest into Kate’s death.

As long as someone investigates, Ms Dyer says they will be satisfied no matter the outcome.

“[If] the outcome of an inquiry is there’s not sufficient evidence one way or the other, we recommend that all parties now put down their weapons and Mr Porter is entitled to resume his political career without further unrest or disruption, then we will abide by that.”

Crisis support is available from Lifeline on 13 11 14.