“I only want to work with the greats,” says Denzel Washington. “I literally just called Steve McQueen. I called Paul Thomas Anderson. These are the kinds of filmmakers I want to work with. I want to learn and grow with the best. And, needless to say, Joel Coen is the best.” It took a couple of years after he first started talking to Coen before he got the call, either late 2018 or early 2019, but it did come.

“From Joel Coen or Frances [McDormand], I can’t remember who called first. And whoa! You’re doing what? Macbeth. Oh! OK!” The Tragedy of Macbeth was exactly what he wanted. McDormand, Coen’s wife, would play Lady Macbeth. The actors would work together as a company on sets built on a sound stage, chewing over the text and reading each other’s parts. It would be like the best theatre. Shakespeare. He would go back to where he began.

Denzel Washington is 67. Not old these days, obviously, but sufficiently advanced in years to concentrate the mind. “I’m in the autumn or, as Macbeth says, the yellow leaf of my career,” he says in that sonorous preacher’s voice. “I really want to keep it simple.” He has several irons in the fire: an ongoing project directing all August Wilson’s plays, his shortlist of directors and a plan to do King Lear on Broadway. Inspired by this Macbeth, he thinks he would also like to do an older Othello as well. “Two or four more years – as long as my knees hold up – I want to get back on the stage and play those roles.” 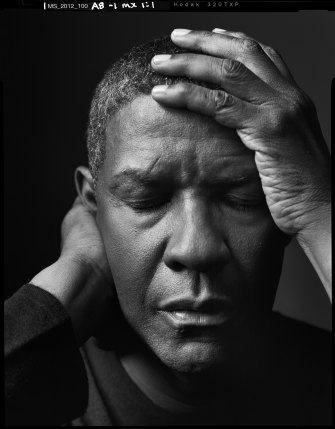 As he says later, Washington is all about the work. He is no good at doing nothing. People who have worked with him say he is always on set before anyone else, even if that means arriving at 3am. His commitment – along with talent, obviously – has earned him two Oscars (for Glory, 1989, and Training Day, 2001), universal respect for such leading performances as the title role in Spike Lee’s Malcolm X (1992), Rubin Carter in The Hurricane (1999), and as a ’50s father in August Wilson’s Fences (2016), which he also directed. Fences was nominated as best picture, among other categories. A nomination for The Tragedy of Macbeth would be his 10th. Of course, he has also done a lot of action movies; his other tally of 10 is the number of films where he starred as a policeman.

Denzel Washington grew up in Mount Vernon, a predominantly black suburb north of the Bronx. His parents had moved up from the South. Denzel Sr was a Pentecostal preacher who was also holding down two jobs – one in a department store and one with the local water company – so his three children saw him only intermittently. Mother Lennis, who died recently at 97, was a beautician. They separated when Washington was 14. There was a lot of scope for running off the rails, but his strict, remarkably determined mother scraped together enough money to send Denzel and his older sister to boarding schools upstate. It worked. From there he went to Fordham University in New York to study journalism.

It wasn’t all straightforward. After dropping out for a year and washing dishes, he went back, switching to drama. “I tripped and fell into it, you know,” he said once. “I took one class and then I took another.” But he had found his metier. He also started with the heavyweights, making his mark as a student with two classics: Eugene O’Neill’s The Emperor Jones – in a role played on stage and screen by Paul Robeson, one of the black forebears he often name-checks – and what turned out to be a landmark college production of Othello.

Washington remembers playing him as “like a young Mike Tyson, who could fight well but didn’t understand the ways of the world … I was so green, but it was so much fun. I’m just a kid from uptown, from New York City and suddenly I’m trying to interpret William Shakespeare.” 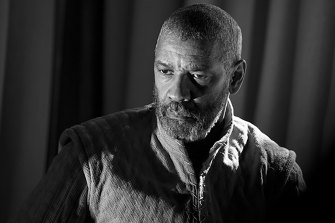 Denzel Washington in The Tragedy of Macbeth.Credit:Alison Rosa/A24/Apple TV Plus

It won him a scholarship to San Francisco’s American Conservatory Theatre to do his master’s degree. Talent, as one mentor told him, can only get you so far. Robeson had been classically trained. Washington wanted that too: the best of the best.

After that, of course, it got harder. He would get a small film role, then find himself back in line for social security. Acting, as we all know, is a tough nut to crack for anyone. Tom Hanks, quoted recently in The New York Times, recalled shooting the breeze with Washington on the set of Philadelphia and saying how they had been broke actors in New York City at the same time, trying to get work and learn their craft. Washington retorted that at least Hanks could flag down a taxi. And the numbers were against him. 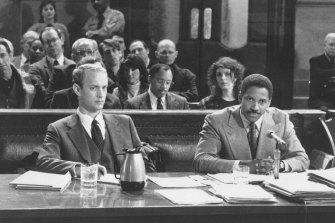 “When I started, a thousand young black men like myself would be reading for one part,” he says. “You know, or a hundred. I remember reading for Ragtime.” Milos Forman’s film was a panorama of 1920s New York. “Everyone and their uncle was there. A young actor called Howard E. Rollins got the part. There was one part. And that is not the case any more. Now there’s a hundred parts. They may not all be good, but with streaming and all these new avenues and opportunities, it is a tremendous change from 1981 to 2021.”

He has lived that change. Even in 1996, the fact that People magazine voted him the sexiest man alive – a slightly uncomfortable thing, surely, for a devout Christian who has been married to his wife, actress Pauletta Pearson, for 39 years – was seen as a breakthrough, showing white audiences might embrace black performers after all. Now, he says “the doors are wide open to young black men and women”. His son, John David Washington, is one of them; he will be part of the cast of his father’s next August Wilson play on stage. “I’ll hold that door open,” he adds. “That’s my job now.” 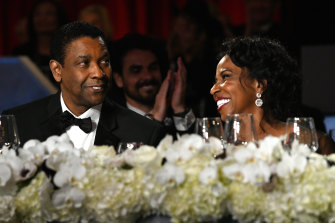 Many fell by the wayside. Howard E. Rollins was nominated for an Oscar, but fell prey to substance abuse and died at 46. Clearly, Denzel Washington was made of sterner stuff, including a resilient ambition. Was that a way into Macbeth? A silence follows, which worries me – Washington has done some prickly interviews in the past – but it’s probably just the long lag on our internet call.

“I had no ambition for evil,” he says at last. “If it is anything, Macbeth is a cautionary tale about that. You will lose your head. I don’t have that. But I like exploring these sides. I’ve heard a lot of people talk about his madness, but I think it’s really not so much about his mind as his soul. He gave up his soul, he sold his soul to the devil and that led to madness, because it became a bottomless pit. Where does the killing stop? There was going to be no end to it. I find that fascinating.”

I believe in light and dark forces. I believe in good and evil, God and the devil, whatever you want to call it.

Does Washington, raised in the Pentecost, believe in evil? “There’s evil in man,” he says. “There’s evil in us. It’s in us. The enemy is the inner me. Now, without some kind of an anchor, be it religious or not, spiritual or whatever, you will go wherever the wind blows. You will be vulnerable. I believe in light and dark forces. I believe in good and evil, God and the devil, whatever you want to call it. [Macbeth’s three] witches, definitely: who do they work for? Why did they show up?” They cook up their witches’ brew of spells to whisk up the worst, but they already know they have their man. “He was also ready. These guys are old. They couldn’t have an heir. They’ve got to get in there and start lopping off heads.”

At first sight, Shakespearean tragedy seems unlikely material for one of the Coen brothers, the ironic japesters behind films such as Fargo and Raising Arizona. But it isn’t so very distant from a film like Blood Simple, the brothers’ first feature: it too was about betrayal, murder and an unholy alliance of lovers. Washington also spotted some hallmark Coen moments between the lines.

“When Joel described how he was going to lop my head off, it was so simple it was almost comical. It was ‘yeah, you reach down for the crown and the guy swings and chops your head off. And then the crown bounces.’ I was like ‘oh man, that has the Coens all over it!’” 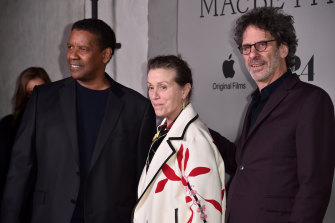 English actor Alex Hassell, who plays Ross in the film, recalled in The New York Times how Washington was visibly excited – as a director himself – to watch Coen work, often asking what he was doing and why. “He is just a genius,” Washington says now. “The way his mind works, his visual approach, his intensity, his focus. I walked in on him one day in his office; I was literally two feet away from him working on his computer and he didn’t notice. I was just standing there going ‘man, that’s what I want’. That kind of focus. And as it relates to Macbeth, that’s a director I’ll follow into any battle.” 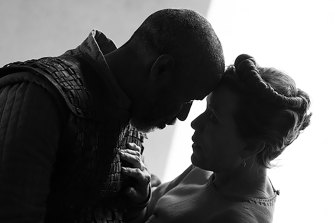 Denzel Washington and Frances McDormand in The Tragedy of Macbeth. “These guys are old. They couldn’t have an heir. They’ve got to get in there and start lopping off heads,” says Washington.Credit:Alison Rosa/A24/Apple TV Plus

It feels like more of a stretch to imagine Denzel Washington in a Paul Thomas Anderson film, at least after seeing the winsome Licorice Pizza. What do they imagine doing together? Washington doesn’t know. “I actually went to his house. We spent a lovely day together; he’s a wonderful man, a beautiful home, lovely wife, funny. He just walked me round his laboratory, his man-cave where he does the work and I said to him, ‘I want to do something with you’. And he said OK. I don’t know, now it’s whatever his process is. But I feel like that’s what is left for me. I just want to collaborate with the great directors.” And to direct his own films, so that he can “lift up others”. To do the right thing.

Because as someone who hates doing nothing, you can always do more. And you just hope you will do it better. “You know the clock is ticking,” says Washington. That phrase again; it was Macbeth’s clock last time. “I’ve been blessed beyond measure. I’ve had a career that … I can’t complain about anything. But the future for me is the guy I see in the mirror. And I’m saying ‘OK, have you done your best work? Other people think this and that, but what do you think?’ And most times I say ‘no, I haven’t’. I kind of feel like I’m just starting on a new phase. And Macbeth is the beginning of that phase.”

The Tragedy of Macbeth is now showing in select cinemas and premieres globally on Apple TV+ on January 14.