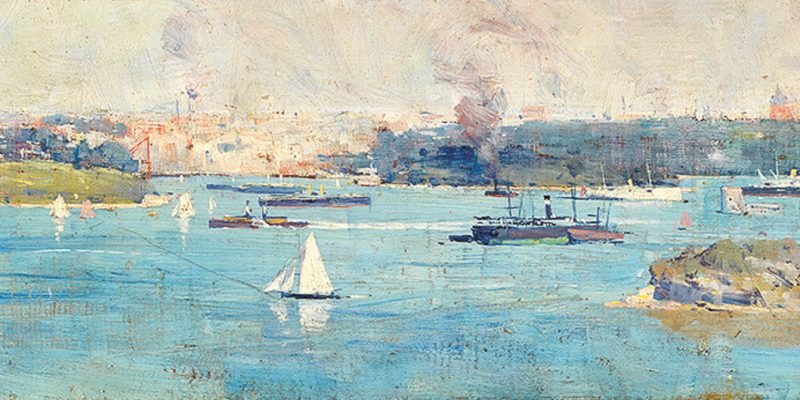 The early Australian impressionist Arthur Streeton wrote as lyrically as he painted: Sydney was "a land of passionfruit and poetry" with balmy air under "a warm palpitating sky".

To more formally trained artists, Streeton's sunlit 19th century canvasses – fleeting glimpses compared to previous artists' more literal works – were a travesty. He was accused by a critic of the time of "blistering the canvas with the fierce rays of the sun". 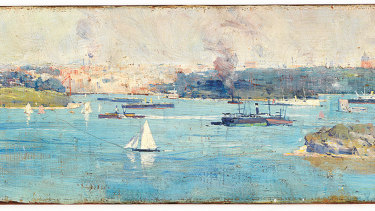 To Mitchell Librarian Richard Neville, Streeton's vision was an entirely new way of looking at the Harbour, and a taste of what was to come the next century with artists like Brett Whiteley.

Streeton looked the part, too, and liked to quote Shelley and Keats. He was tall, slim, blue-eyed with "the faint promise of a golden beard," wrote Julian Ashton, an artist who founded the Julian Ashton Art School and was a supporter of the Heidelberg School, as early Australian impressionist artists were known.

When other artists talked art theory, Streeton would laugh, "and walk up and down shouting, 'Apples, oranges and lemonade'," wrote Ashton in his book The Art of Arthur Streeton, published in 1919. 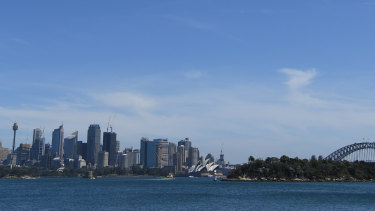 View of Sydney Harbour today, taken from near where Arthur Streeton painted his panorama. Credit:Kate Geraghty

Streeton was a perfect counterpoint to the artists that had come before, said Neville. He was not concerned about accurate topographical renditions, but interested in the light. This was at odds with earlier conventional representations of the Harbour, such as the English picturesque style of Conrad Martens, or the precise representations of Eugene von Guerard.

Streeton was a key figure in the Australian impressionist school where en plein air – or outdoor painting – saw artists develop a unique style of bold brushwork and light-filled compositions.

The gift for the outgoing Admiral was described in the newspaper as "a living, speaking picture, full of that fire which is so peculiarly Australian…"

Other critics urged people viewing Streeton's work to ignore the critics, and bask in its emotion: "One cannot be forced or educated to understand and appreciate his work. It is only by intuitive love and sympathy with harmony that we can approach him (and) expect proportionate enjoyment."