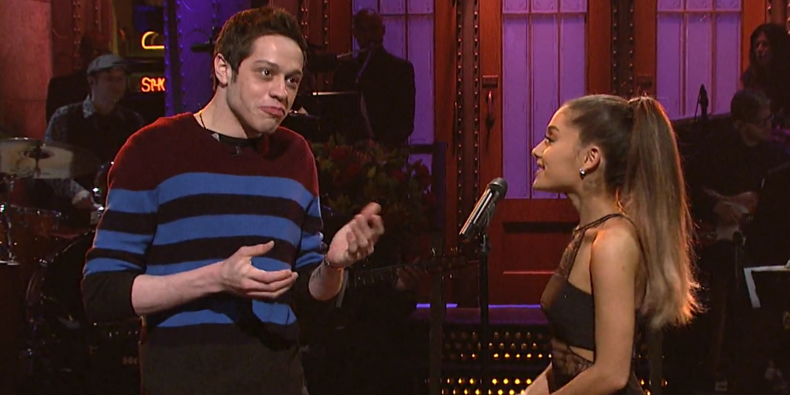 Who releases a song on a Saturday night? This is not a rhetorical question: The answer is Ariana Grande. Last night, late enough that you might have missed it (even though it was the most important thing that happened last night), Ariana Grande released a new song, entitled, “Thank U, Next.” The timing couldn’t have been accidental: She dropped the track shortly before the newest episode of Saturday Night Live—the first one since she and SNL cast member Pete Davidson broke up last month.

“Thank U, Next” is filled with references not only to Davidson (“for Pete, I’m so thankful,” she sings in the first verse) but to Grande’s other ex-boyfriends of note: the late Mac Miller (“wish I could say ‘Thank you’ to Malcolm, ’cause he was an angel”), Big Sean (“thought I’d end up with Sean, but he wasn’t a match”), and her former backup dancer Ricky Alvarez (“wrote some songs about Ricky,” she chants, “now I listen and laugh”). But the title unavoidably refers to an incident last week involving Davidson: Earlier this week, the SNL cast member, hair freshly dyed an icy blue, appeared in several promotional videos for the upcoming episode of Saturday Night Live alongside host Jonah Hill and musical guest Maggie Rogers. In one, Davidson introduces himself to Rogers: “Hey Maggie, I’m Pete,” he says. “Hey, Pete,” she replies. “You wanna get married?” he asks. “No,” she turns him down, point-blank.

“0 for 3,” he says dryly. Though a small, self-deprecating reference to his recently terminated engagement to Ariana Grande, apparently, the gag contradicted their agreement not to publicly discuss their breakup. “For someone who claims to hate relevancy u sure love clinging to it huh,” Grande tweeted, apparently upon catching sight of the promo. (She later deleted the tweet and responded in the more formal form of a song.) “Thank u, next.”

And there’s nothing like the wrath (or, at least, the ambivalence) of Ariana Grande to strike fear in the heart of comedians everywhere. According to TMZ, Davidson had planned to address the breakup in a sketch, but after Grande’s series of tweets (and, we can only hope, some actual direct communication between the two), he asked Lorne Michaels to kill the sketch. Instead, Davidson substituted a whole sketch for a short, entirely earnest mention of it (their engagement had been constant fodder for jokes earlier in the season, so perhaps it was unavoidable) during a segment of “Weekend Update.”

He appeared on “Weekend Update” ostensibly to talk about the midterms, but he opened with what could only be a reference to their split: “After I moved back in with my mom, I started paying attention to them.” (Davidson had previously said that Grande paid their rent; he stocked the fridge.)

Later on, he got a bit more explicit about the split. “I know a lot of you are curious about the breakup,” he conceded towards the end of his segment. “The truth is, it’s nobody’s business, and sometimes things just don’t work out, and that’s okay. She’s a wonderful, strong person, and I genuinely wish her all the happiness in the world.” Meanwhile, Grande formalized her campaign platform of "thank u, next" in a song.

Related: Why Ariana Grande and Pete Davidson Called Off Their Engagement