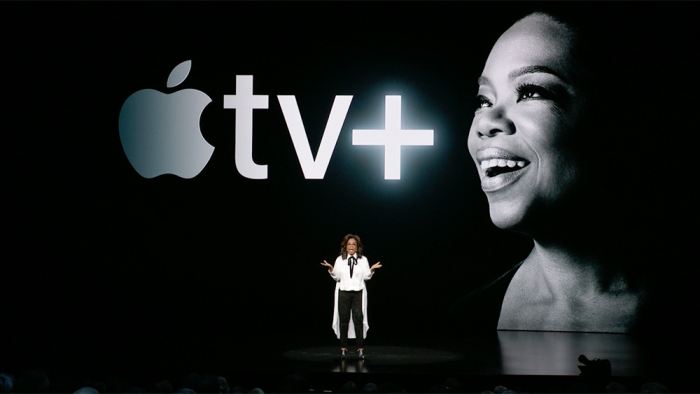 Apple’s March 25 conference announcing various new services — including their upcoming passel of video content — was heavy on grandeur and light on specifics. Company CEO Tim Cook described the company’s move into television as part of an ongoing commitment not merely to diversion and customer satisfaction but to social change. “Apple has always tried to make the world a better place,” he said, “and we believe deeply in the power of creativity.” He later noted that Apple “can contribute something important to our culture and our society through storytelling.”

The story of Apple’s video service — to be called Apple TV+ and to materialize sometime this fall — remains to be told, even after a lengthy, upfront-style presentation celebrating not merely Apple’s programming but the power of art and the human spirit, or something along those lines. After a video segment depicting various Apple-contracted creators, including Steven Spielberg, J. J. Abrams, and Reese Witherspoon and Jennifer Aniston, describing the thrills and agonies of the creative process, those stars and others took to the stage to describe their upcoming shows. No substantial footage from any show was provided at first, with a brief clip package at the presentation’s end aggregating glimpses of various series; all looked fabulous and, crucially, expensive.

It was Apple-ishly mindblowing in the way, say, the debut of the iPod had been. Any day of programming so laden with A-listers that, say, Aniston (probably the biggest star in television at the moment thanks to the extended second life of “Friends” on streaming) doesn’t get mentioned first is a big one. And yet it communicated a mixed message. Apple was using familiar levers of both television craft and marketing — enlisting top talent the way all outlets are trying to these days, promoting shows through direct appeal to fans and industry in an onstage event the way networks have done since the dawn of the upfront. And they did so in order to pitch themselves as an organization that would be doing something different from, and more than, plain old TV.

Any of the shows Apple presented could, based on their loglines, have gone elsewhere: Spielberg’s “Amazing Stories” reboot on Amazon, Witherspoon and Aniston’s behind-the-scenes “The Morning Show” on HBO, Abrams’s collaboration with Sara Bareilles on Hulu. (Or mix and match shows and networks, any way you like!) Based on what we saw, which was precious little, the viewer has no evidence that Apple will be any different in sensibility from, say, Netflix, another organization that has put together a mass quantity of programming driven by the sensibilities of well-known creatives. Which is fine — Apple could be very successful imitating Netflix. But its drive to distinguish itself as something special has the potential to distract from what really matters at a network or streaming service, which is quality.

Consider that Netflix made its first real case for itself as a provider of original content with three programs: “House of Cards,” “Orange Is the New Black,” and the revival “Arrested Development” all appeared within the first seven months of 2013. One was a familiar brand from its past incarnation on Fox but hardly a premium product; one had the household names of David Fincher and Kevin Spacey attached but was hardly a story intended to uplift and inspire. The third (and best) of the three shows came from a creator who was known to TV devotees but not quite a celebrity, featuring a cast of relative unknowns who’ve become durable stars. Netflix’s massive success began with scrappiness, not razzle-dazzle. In their own ways, Amazon and Hulu have done the same, winning fans for programs that state their ambitions plainly but don’t shout them. Though both were certainly successful, neither Amy Sherman-Palladino nor Elisabeth Moss would have felt quite at home on a stage as populated with legends as Apple’s before their respective shows launched. And now “The Marvelous Mrs. Maisel” and “The Handmaid’s Tale” have become the first streaming shows to win top comedy and drama honors at the Emmys. These shows rise or fall on premise and execution, not solely the prestige of their creators and stars.

Apple’s programming will eventually do the same. But, for now, the framing is all we have, and it suggests television-as-premium product in a way that gets away from the serendipity and oddity of the medium as its best. Framing the service as one in which stars are the enticement and what they get up to is a secondary concern suggests that Apple, a newcomer to the TV space, has yet to figure out what fans love about television. Its booking of Oprah Winfrey as the presentation-closing coup made this plainest of all: Winfrey is a generational talent, but she’s also omnipresent, including on her podcast and on OWN, her dedicated cable network. And the advocacy she used to do on her talk show doesn’t feel quite so rare in a more crowded landscape. How will her work with Apple, including two documentaries and a book club, distinguish itself as uniquely Oprah, uniquely Apple, or uniquely worth watching? It remains to be seen, which might not be good enough for the consumer deciding this fall whether to add on yet another subscription. Same with the new Sesame Workshop-licensed series: It’s a coup for Apple, sort of, but if “Sesame Street” is already on HBO, what does this add to the harried parent sorting through all those recurring monthly charges?

Apple is a brand with other obligations, and all the television it platforms will reflect back on its company in a way that simply isn’t true of Hulu. Its enlisting a suite of megastars is impressive in a way other platforms don’t feel obliged to be. And yet its vision of itself as a force for good and not just good television seems like a potential stumbling block in achieving either. Viewers in 2019 want to be entertained, and not necessarily by names with whom they’ve been intimately familiar for decades. The streaming successes of recent vintage have gotten where they are not merely by proving themselves worthwhile but by exceeding expectations. For Apple, a company that has staked its claim not merely on success but on medium-shifting excellence from the first moments its service was announced, that may end up being a challenge that’s hard to meet.