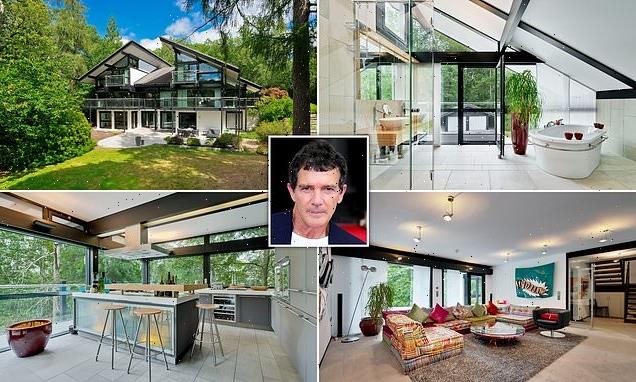 A little slice of Hollywood glamour is currently on the market in Surrey – after actor Antonio Banderas decided to sell his stylish Huf Haus for a cool £2.95 million.

The Hollywood star, 60, known for his roles in The Mask of Zorro and Interview with a Vampire bought the 2005 prefab property located in Cobham in 2015, with his girlfriend Nicole Kimpel, shortly after splitting from second wife Melanie Griffith.

The five-bed house, offers a roomy 5,400 sq ft of living space and sits in an acre of of land surrounded by woods, affording privacy for potential owners.

The nearby Surrey village of Cobham is brimming over with celebrity neighbours including British tennis star Andy Murray and ex Chelsea player John Terry. 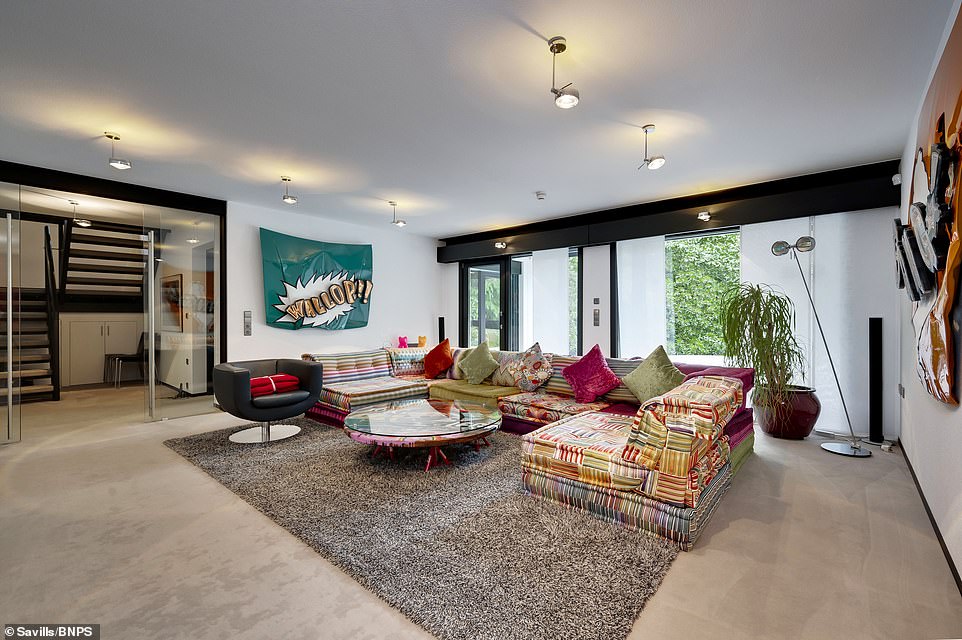 After six years of living in the UK, Antonio Banderas, 60, is selling his German-built in Cobham, Surrey for £2.95 million (Pictured: the home’s colourful living room) 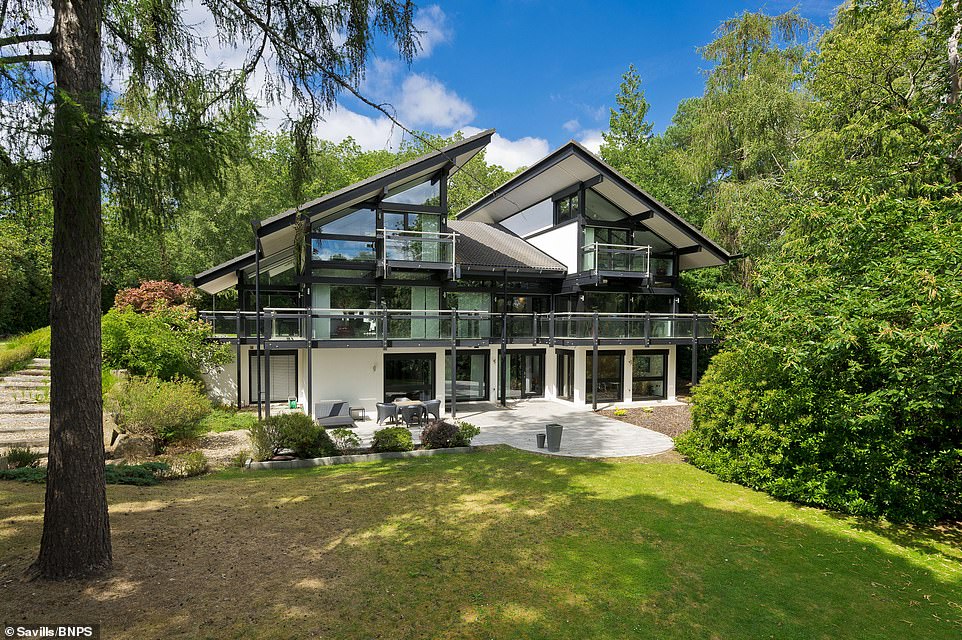 The house was built in 2005 by the German firm Huf Haus, which specialise in eco-friendly lavish prefabs made of wood beams and glass, pictures (seen from outside)

While the star has said he loves the house and has enjoyed his time in the UK, he didn’t spend as much time in the English countryside as he had hoped he would, and is now looking to re-settle in his native Spain, where he has bought and built a theatre in Malaga.

The eye-catching 2005 property in Cobham was designed by German architecture firm Huf Hauf, which specialise in prefab houses marrying wood and glass in an eco-friendly fashion. The minimalist design style offers open-plan living, flooded with light thanks to floor-to-ceiling windows.

The Banderas Huf Haus, which is brought to the market by Savills, is arranged over three floors and is described as ‘perfect for entertaining,’ by the estate agents.

Step inside and potential buyers will find an open-plan living space on the ground floor with distinct quarters including the dining room, living room, kitchen and a work and play area as well as a cloak room. 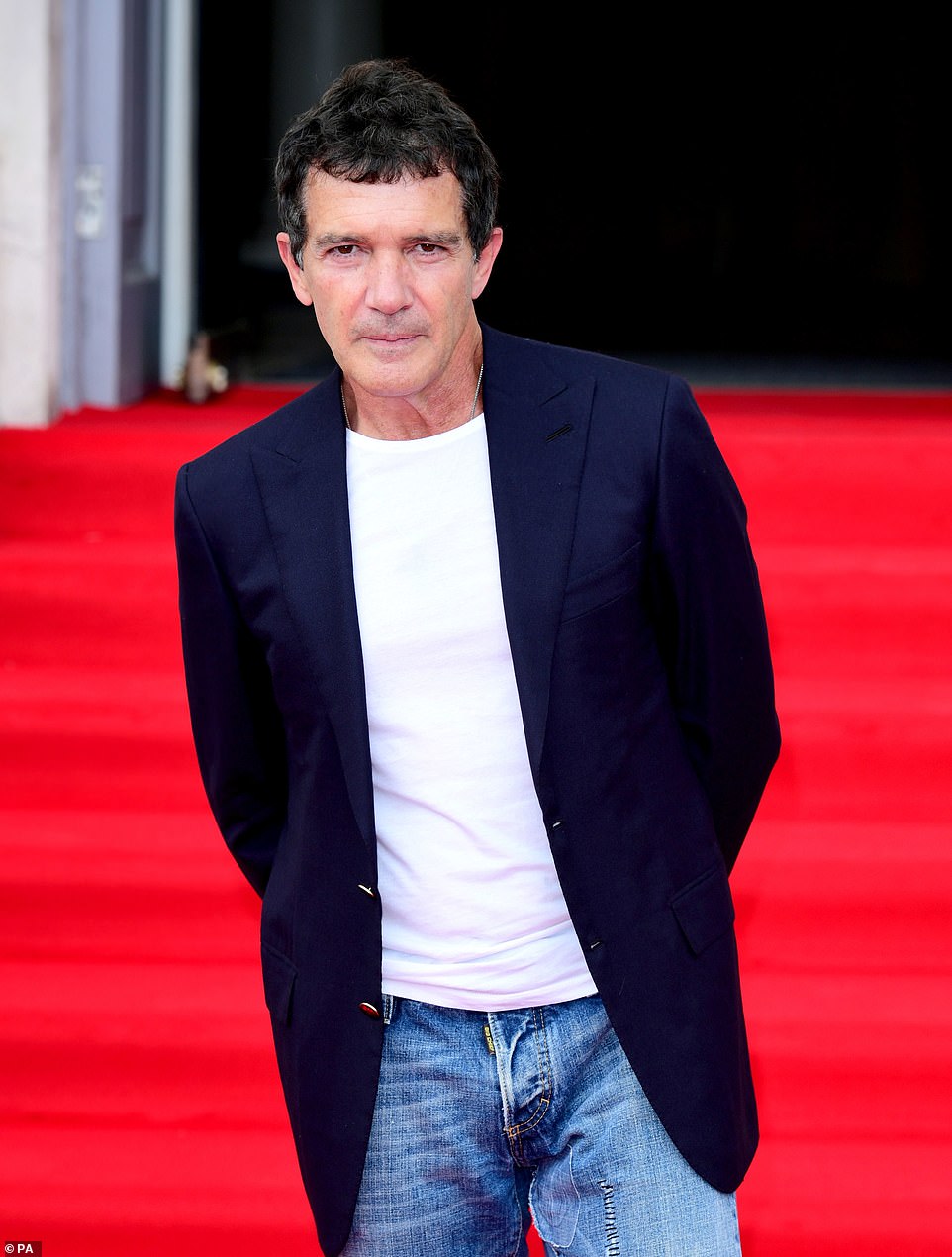 Antonio Banderas bought the house in 2015 with the plan to stay there for a minimum of five years, but is now moving on after a heart attack in 2017 (pictured in August 2019) 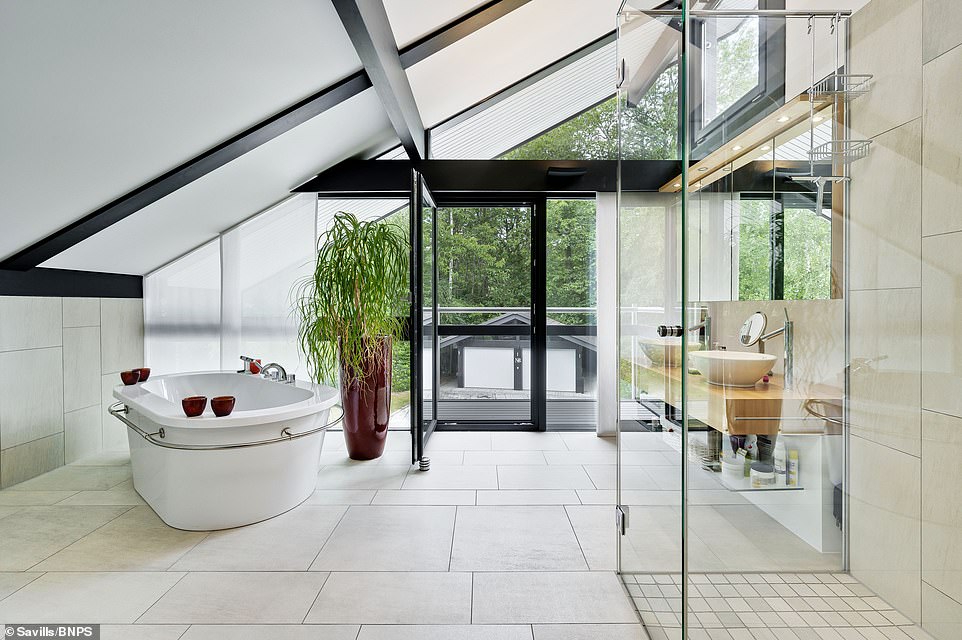 The house has under-floor heating and its floor-to-ceilling windows offer lots of sunlight. Pictured: the master bedroom’s bathroom 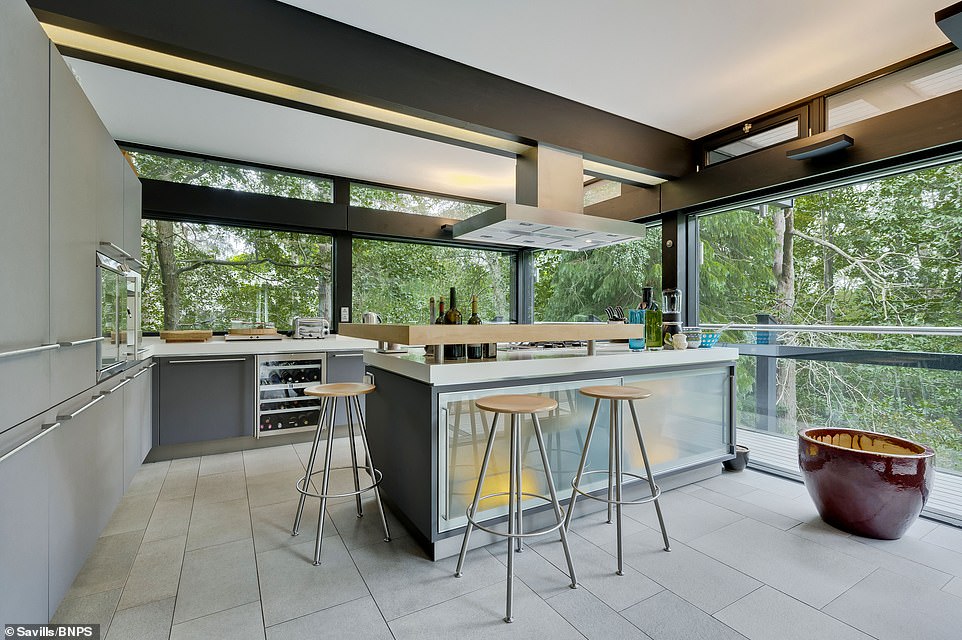 The ground floor of the property favours open-plan living and includes a modern kitchen, pictured, as well as a dining-room, living-room and a study

Every room was styled with neutral tones, with white walls and cream stone floors, which offers a stark contrast to the black wood beams of the house, with the furniture handpicked by Banderas and Kimpel bringing in welcomed touches of colours throughout.

The ‘butterfly split roof lets in lots of natural lights throughout the three-floors of the property. One floor up is the main bedroom with a nearly 13sq metres dressing room and an en-suite bathroom. Two double bedrooms are located on the other side of the same floor with a communal bathroom between them. 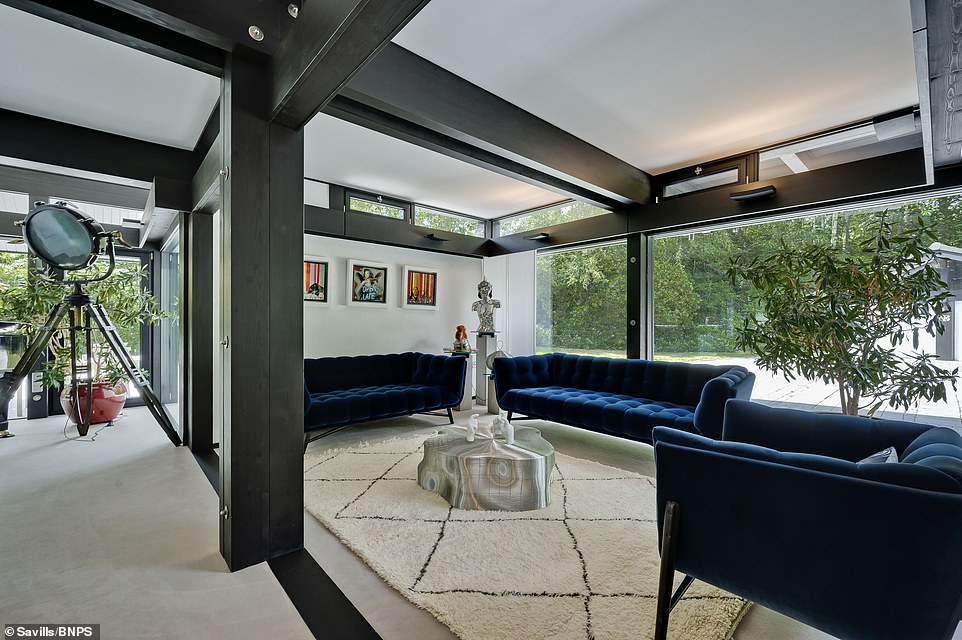 Banderas and his girlfriend Nicole Kimpel handpicked each piece of furniture found in the house. They picked neutral walls and floors to contrast with the traditional black wooden beams (picturedL the living area of the ground floor) 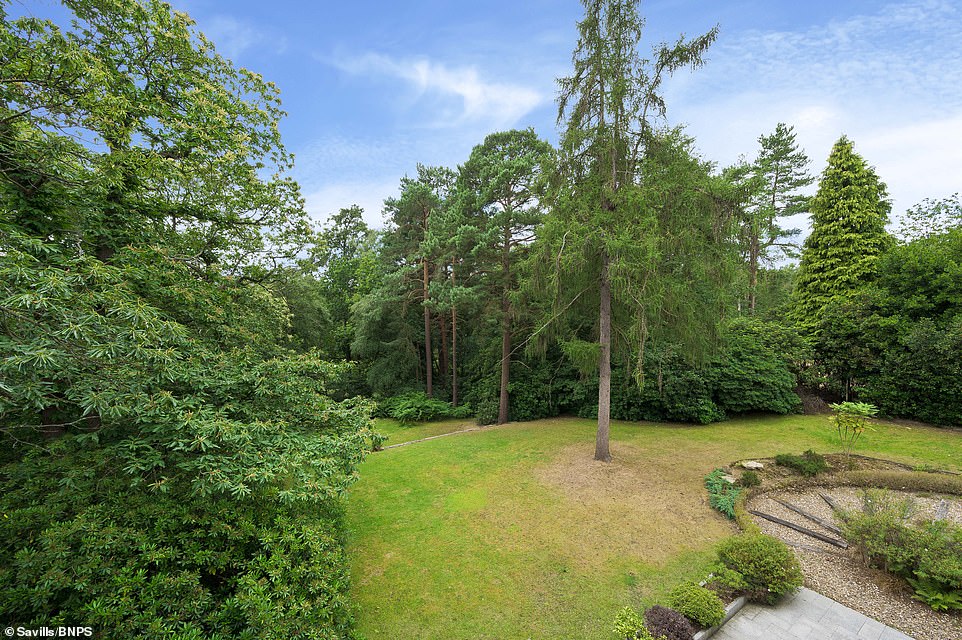 The house offers plenty of privacy thanks to the woodlands that surrounds its one acre of land, pictured, and provides a temple of tranquility away from the city’s bustle 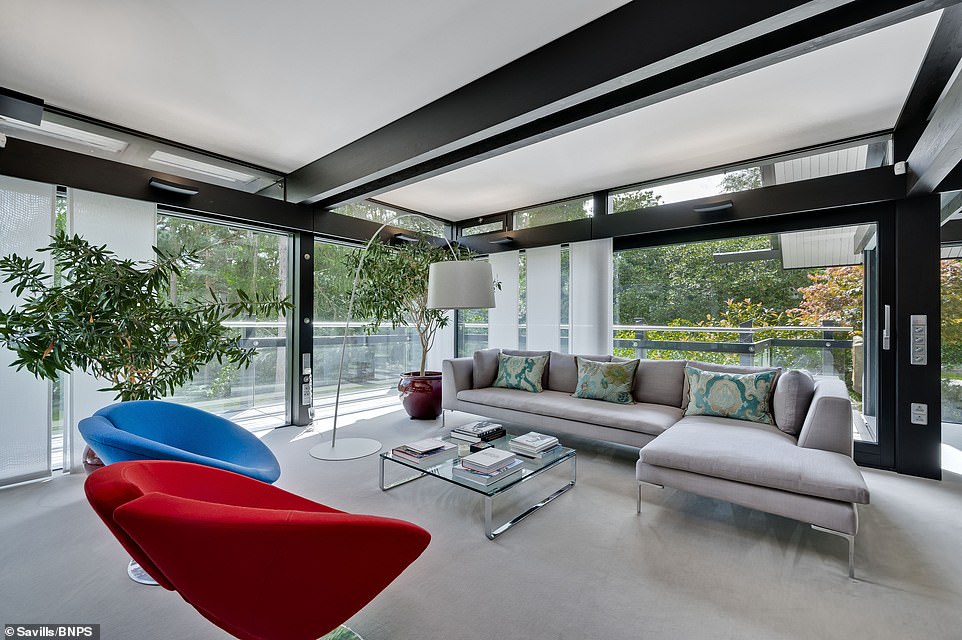 Pictured: the living-room, which opens to a terrace. Banderas bought the property in 2015 after it was recommended to him by his girlfriend’s father, who is a Huf Haus enthusiast

The fun begins in the lower-ground floor, which includes a ‘media room’ that Banderas and Kimpel used as an indoor cinema.

On the same floor, fitness fans will find a gym and a sauna, as well as two extra bedrooms for guests, a shower room and utility rooms. It opens to a patio area for breakfasts or lunches in the sun.

All floors are equipped with under-floor heating, to make the 2005 construction as cosy as it is enjoyable.

Outside, car fans will find a double garage for their vehicles, and nature-enthusiasts will rejoice in the one acre of land surrounding the house, including woodland.

Antonio Banderas, who purchased the house for £2.4 million six years ago, has been a fan of the privacy it offers, saying: ‘ 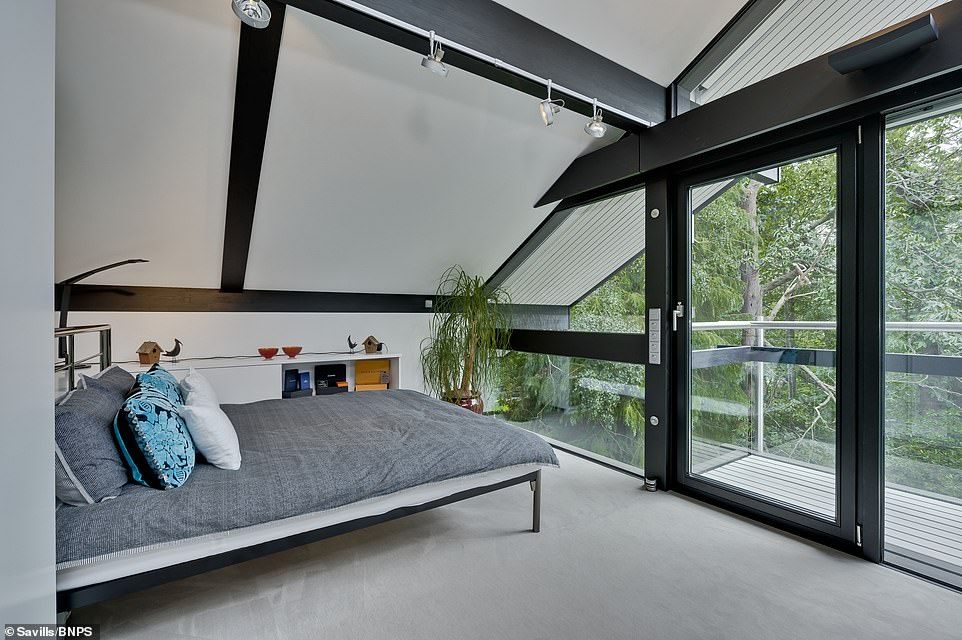 Each bedroom, pictured, opens to its own private terrace, which overlooks the woodland surrounding the property. There are two bedroom on the first floor, as well as the master bedroom, which has its own dressing room and en-suite 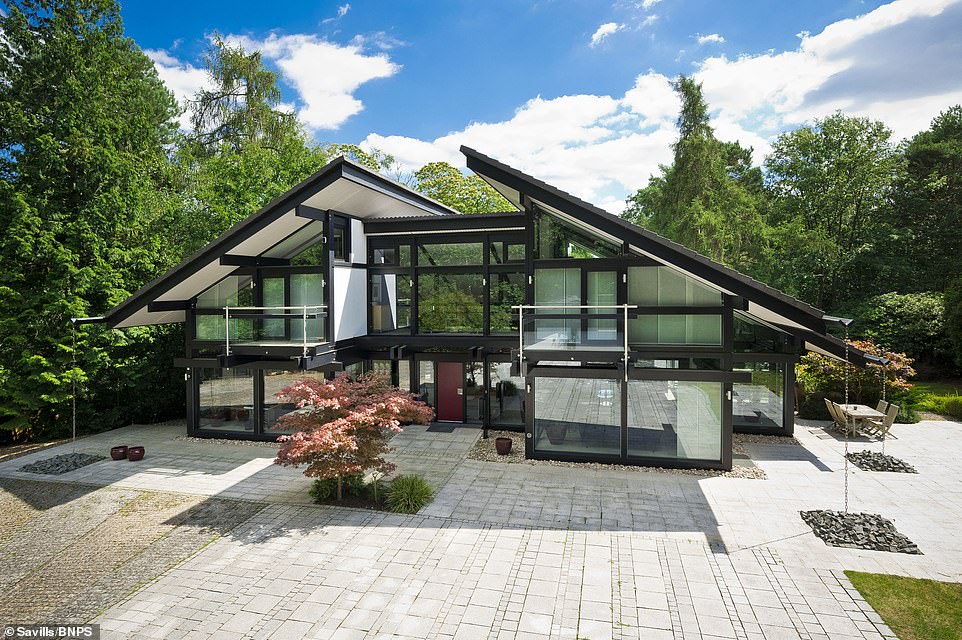 The house seen from outside, with it’s floor-to-ceilling windows and large patio terrace, perfect for entertaining in the summer

‘We both had a really good time living in Cobham, and enjoyed the private location,’ he said.

The Mask of Zorro actor, who divorced ex-wife Melanie Griffith in December 2014, moved to the UK with his Dutch-German girlfriend, an investment adviser, after selling the LA home he shared with his ex-wife for £11.4 million.

Speaking of his stunning new home the heartthrob told the Sunday Times at the time: ‘I find Surrey magical. I am not a party person any more, so I have the space and peace to write and really get inside my own head – I am working on several scripts.

‘I go cycling in the woods, and everyone in Cobham, Weybridge and Esher is incredibly friendly. Above all, I am surrounded by nature. I love watching the deer and foxes that come to my garden. 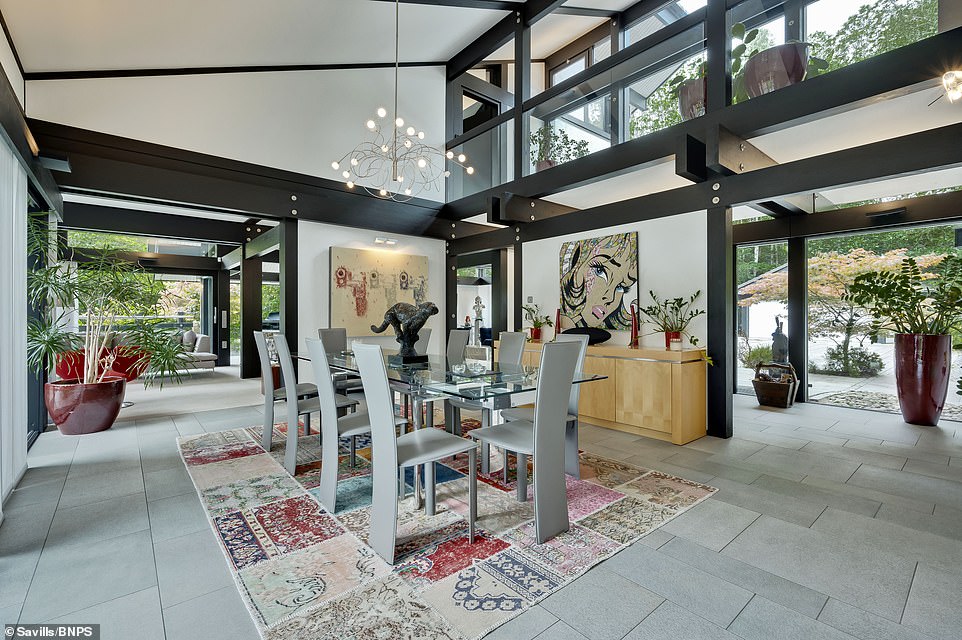 The living area’s dining-room section, which opens to both the kitchen and the living-room. The property offers nearly 5,000 of living space 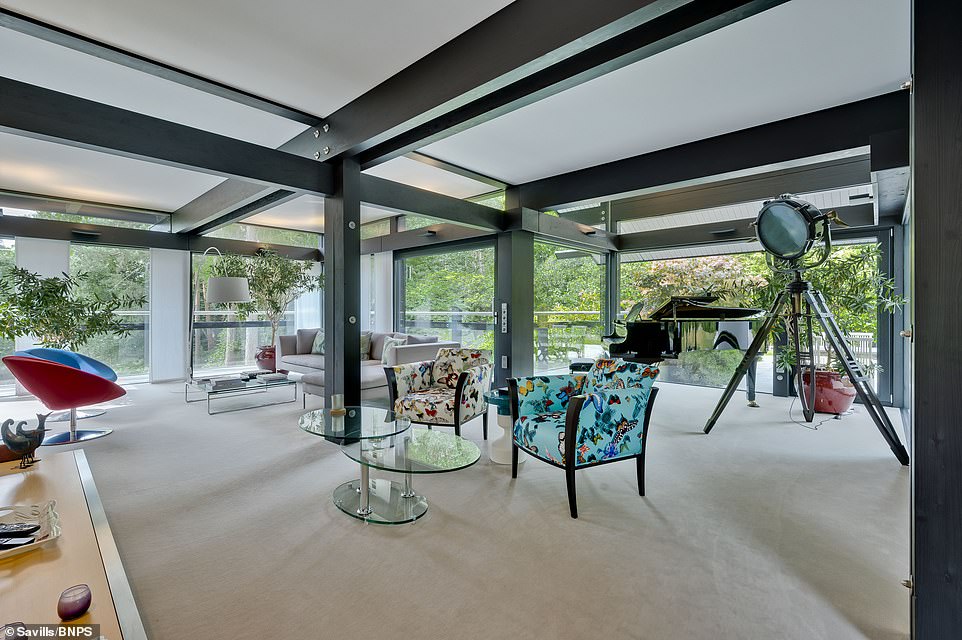 The living-room is a perfect size for entertaining. On the ground floor, guests will find the cinema room, gym and shower complex 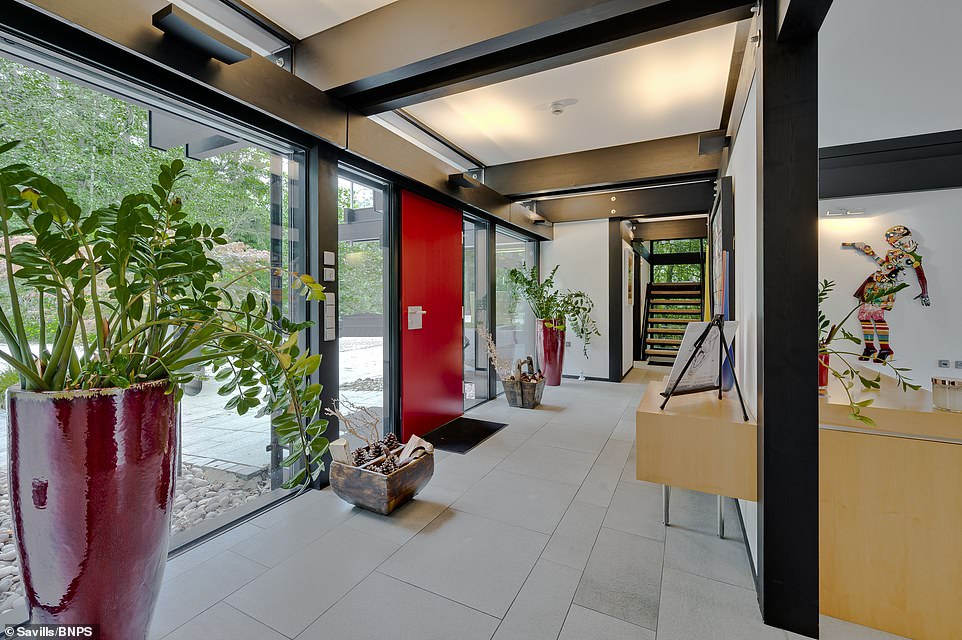 The entrance hallways, with a striking red door opening onto cream stone floors and white walls. Banderas and  Kimpel’s decoration style paid homage to the woodland around them, with plants and pine cones

Delighted with his 2015 purchase, the star had likened his new home to a ‘diamond’ catching the sun, and said his Huf Haus property was his favourite so far.

Antonio was introduced to the home by his girlfriend’s father, who previously owned two Huf Houses and found the Cobham property for Antonio and his daughter.

The company deliberately restricts the number of houses built as the factory can put up only 200 homes a year, with just 20 to 30 of those in the UK.

Seen as the Rolls-Royce of kit homes, Huf Haus prices start at about £500,000, before land costs. Once they have planning permission in place, customers are invited to Germany to choose everything from the size and layout of the rooms to light switches and bathroom tiles.

Factory production takes four months, after which the flat-pack home is shipped to the UK along with a team of German builders. Assembly of the shell takes a week or less, with the interiors (including electrics and plumbing) taking a further 12 to 14 weeks. 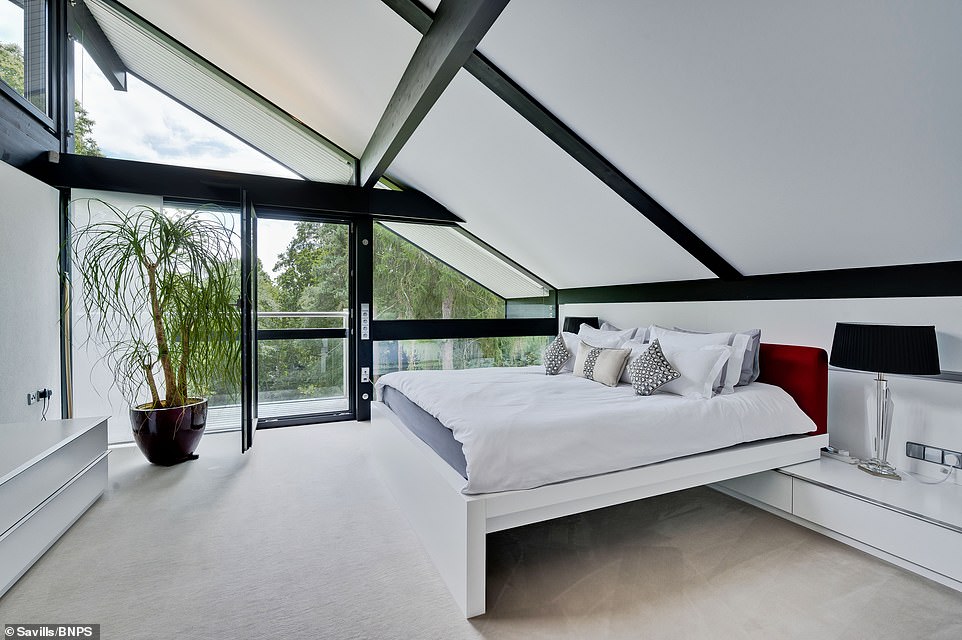 One of the bedrooms, decorated with a white bed and matching furniture, matching the modern style of the house’s white walls and black beams 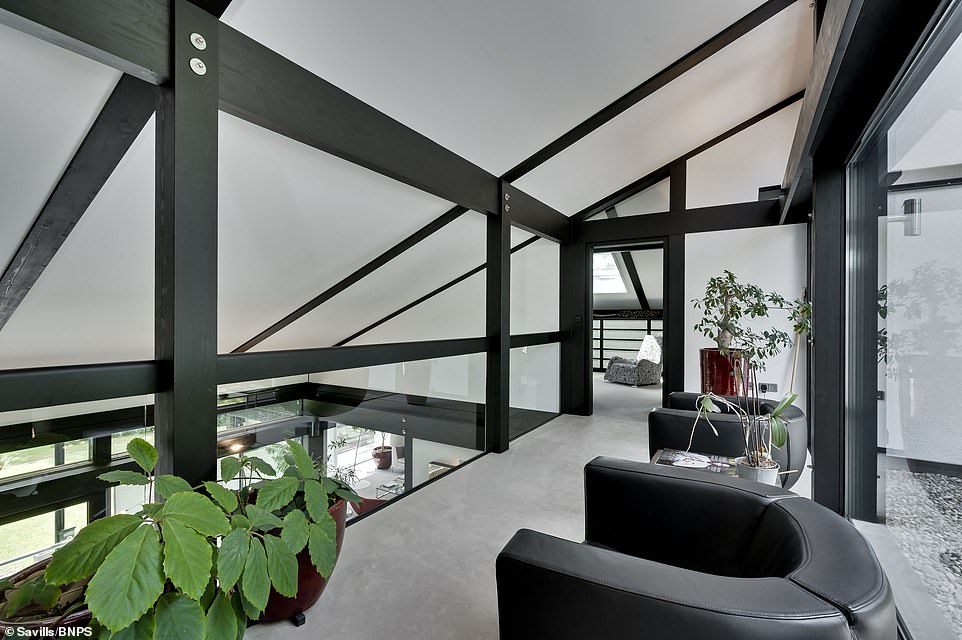 The first floor landing connect the bedroom suit (right) with the other rooms and family bathroom. It opens to a voice overlooking the living area 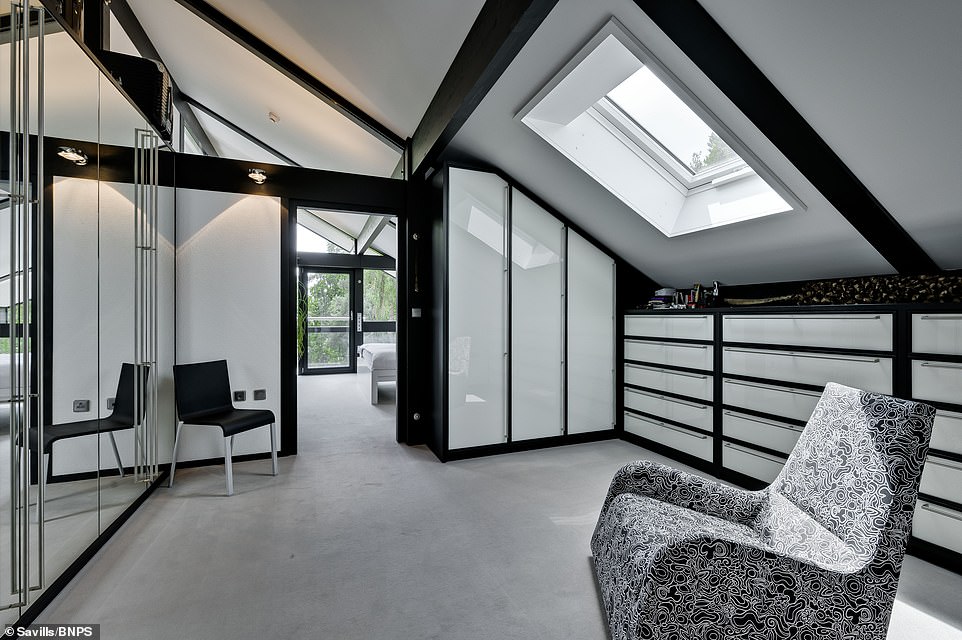 The master bedroom is located next to its own dressing room, which spans nearly 13sq metres and offers plenty of storage for the owner’s fashion picks