‘I cannot understand living so much in the public eye’: Anna Wintour says she is BAFFLED by the Kardashian lifestyle – but admits she ‘admires’ Kim’s style and Kris’s ‘creative genius’

Anna Wintour has revealed her thoughts on the Kardashians’ sense of style style and admitted she has a special appreciation for Kim’s new ‘minimal’ wardrobe.

The Vogue editor-in-chief, 69, sat down for the publication’s weekly videos entitled Go Ask Anna where readers on the street can ask the fashion guru any question on their minds.

One fan asked Wintour her thoughts on the Kardashian family’s style. To that, she responded, ‘You have to admire how they have created an empire obviously through their personalities and the creative genius of their mother.’ 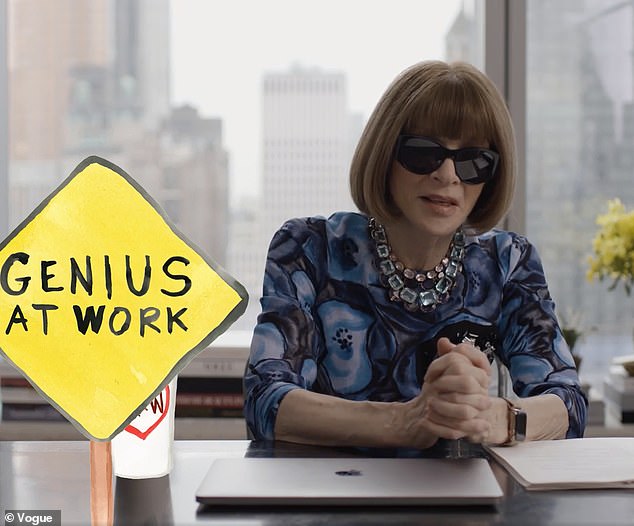 Revealed: Anna Wintour, 69, spoke candidly about what she thought about the Kardashian family and their style in an interview with Vogue 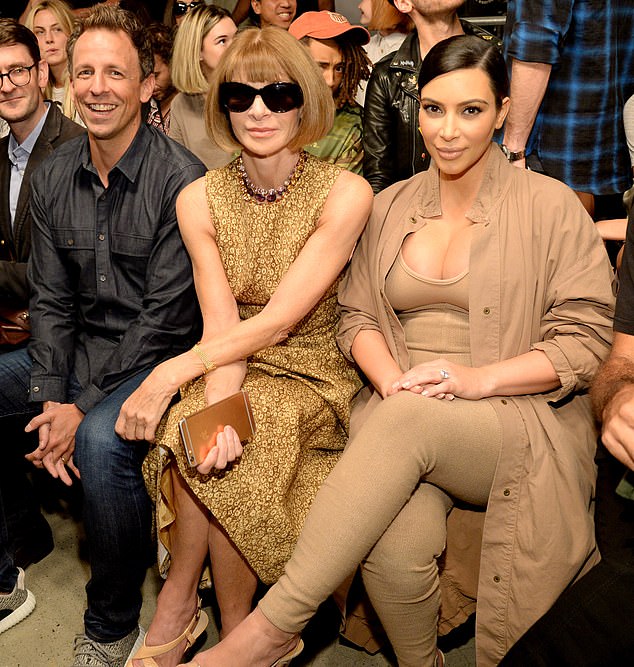 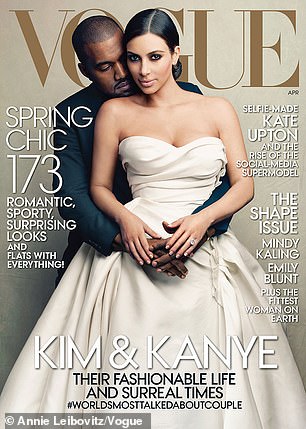 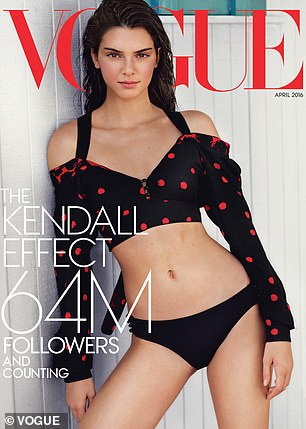 Fan? The Vogue editrix put Kim on the cover of the magazine in 2014 (left), and has also featured her sister Kendall Jenner, who received high praise from Wintour

Her high praise of Kardashian-Jenner matriarch Kris, 63, will no doubt come as a surprise to some after it was reported back in 2013 that Anna had actually banned the mother-of-six from attending the Met Gala in an attempt to clamp down on the number of reality stars in attendance.

Less surprising however are Wintour’s personal thoughts on the Kardashians’ very public lifestyles, with the Vogue editrix admitting: ‘I cannot possibly understand or fathom living so much in the public eye, but obviously it works.’

After praising Kris, Wintour then went on to heap praise specifically on Kim Kardashian West, 38, whose style has notably changed since marrying rapper and clothing designer Kanye West, 41.

‘Kim, of all of them, I feel has possibly changed the most,’ Wintour said during the video. ‘I personally admire the way she’s become a little bit more minimal in the way that she’s dressing and a little bit more covered.’

The couple appeared on the cover of Vogue magazine in 2014 for the first time after the birth of their daughter North West, who is now five years old.

Wintour has also been spotted often at the front row of fashion shows seated alongside Kim and Kanye.

During the video interview, she admitted the person Vogue has worked with the most from the high-profiled family was Kendall Jenner, 22.

The supermodel started in modeling at the young age of 14 and has since appeared on many Vogue covers and pages.

‘People thought that she wouldn’t last, and I give [Kendall] a lot of credit for persevering in her highly successful modeling career,’ Wintour said. 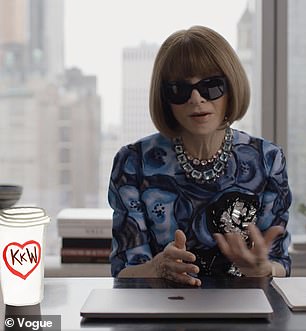 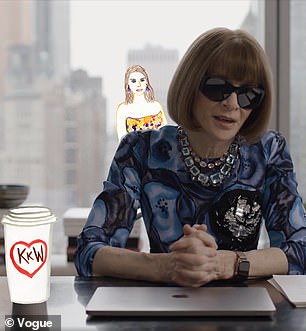 Passionate: Besides speaking about the Kardashians, Wintour also reflected on the legging trend and what people should wear to a job interview 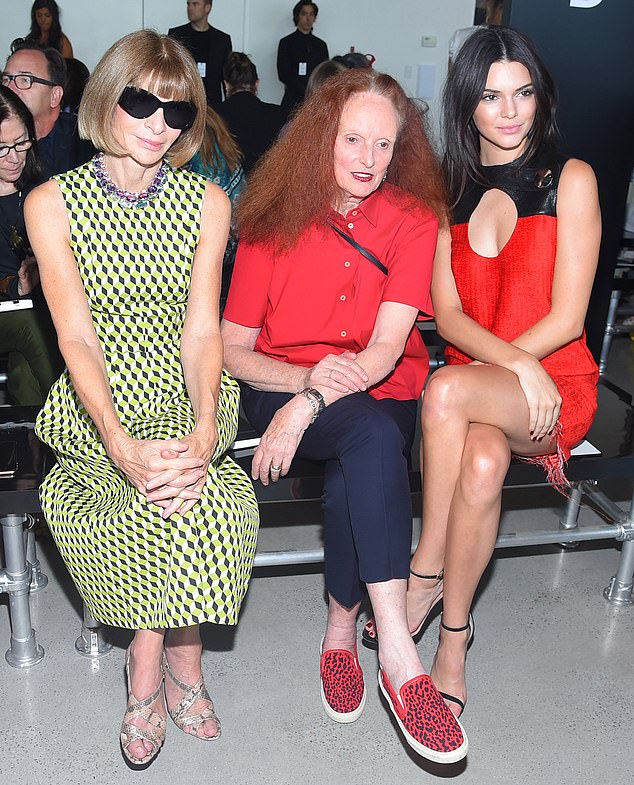 Proud: ‘People thought that she wouldn’t last, and I give [Kendall] a lot of credit for persevering in her highly successful modeling career,’ Wintour said, pictured at New York Fashion Week 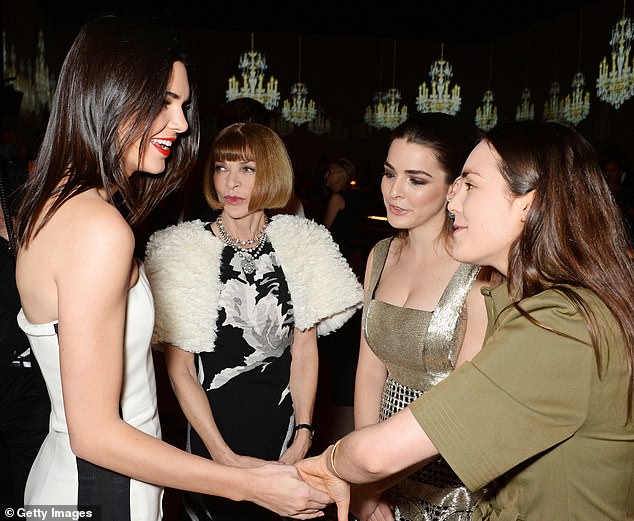 High praise: Wintour confessed Kendall, pictured together in 2014, reminded her of supermodel Linda Evangelista because of her commitment to the job

Wintour then ended the praise by mentioning how Kendall reminds her of another supermodel who is regarded as one of the most influential of her time.

‘She reminds me of in many ways of Linda Evangelista, who always was happy being a model,’ Wintour said. 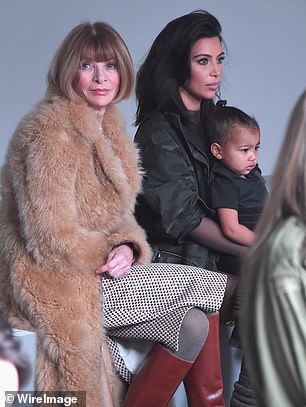 Big change: Kim (pictured with North West) was who Wintour thought changed the most in terms of her style

Her response about the Kardashian family comes as a surprise as the fashion mogul exuded nothing but praise for the family, but none of her responses really answered the reader’s question of Wintour’s thought on their style.

Besides speaking about the Kardashian family, Wintour also addressed her thoughts on leggings and what people should wear to an interview.

‘Well this is not the first time in fashion we’ve celebrated leggings,’ she revealed. ‘We saw them happen I think first in the 80s…I tend to think they look best in black. I’m sure they’ll be back again in another 20 years.’

Someone off-screen during the video then mentioned a time in 1993 when Wintour was seen wearing a pair of pink leggings to an outing. This, Wintour admitted, was not a look she wanted people to remember.

‘That was a mistake,’ she candidly said.

As for interview outfits, Wintour advised people to choose clothing that best represented who they are as a person.

‘Sometimes you feel they’re wearing clothes they had just bought that morning, or maybe the night before, and not something in any way suits their personality and who they are,’ she said.

‘You have to dress for yourself. I think it doesn’t do yourself a service to fake it.’