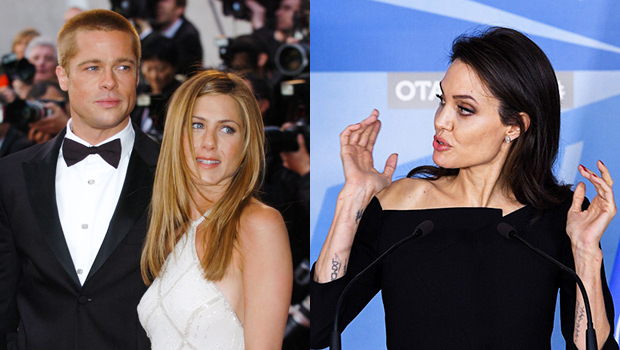 Angelina Jolie had no idea that her estranged husband (whom she’s still in the middle of divorcing) Brad Pitt and his ex-wife Jennifer Ansiton had “gotten close” again, after pictures surfaced showing Brad’s big arrival at Jen’s 50th birthday party at the Sunset Tower Hotel on Feb. 9. A source close to Angelina told HollywoodLife EXCLUSIVELY that she’s trying not to dwell on it. “Angelina is shocked that Brad went to Jennifer’s birthday party,” our source told us. “She was aware they were back in touch, but didn’t realize they’d gotten that close again. It brings up a lot of tough emotions for Angelina but she’s not dwelling on it. As hard as it is for her to know that Brad and Jennifer are hanging out, she knows there’s nothing she can do about it and she is choosing not to focus her energy there.”

As to why Brad showed up, Brad “wanted to support” for Jen after the two have been “friendly” in the years that followed their tumultuous split, according to a source who spoke to Entertainment Tonight. Their source went on to tell the publication, “He came to support her, spoke to other friends of his that were there and headed out.”

We reported earlier that while friends of Jen’s were certainly not expecting to see Brad at her party, his invite did not come as a shock to them. “Friends were a bit surprised but not shocked to see Brad there, but Jen has been open and honest in the fact that they have spoken here and there since Jen’s breakup with Justin,” a source close to Jen told HollywoodLife EXCLUSIVELY. “They’re friendly and they’re on fine terms which is why nobody was totally shocked, but they knew the press and everyone would talk about it. They’re not necessarily close, but more friendly.”