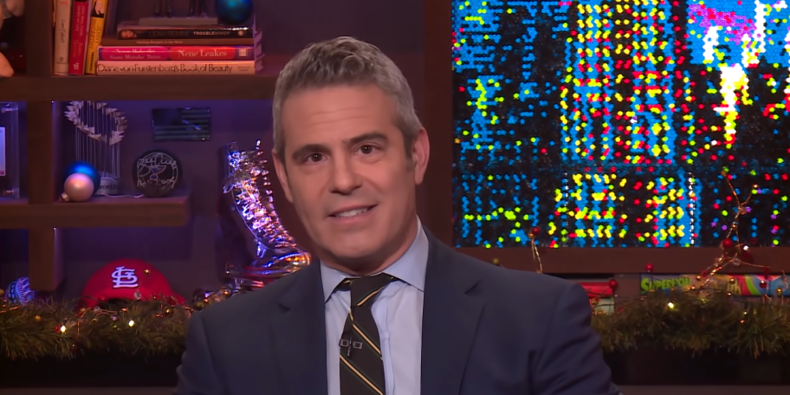 Andy Cohen is ending 2018 with some big news for the new year. On this year's final episode of his talk show, Watch What Happens Live, which aired Thursday, Cohen announced that he will be welcoming a baby via surrogate in early 2019.

"I have always tried to be transparent about my life," Cohen began. "I overshare and I expect everyone around me to do the same. And I want you to be the first to know that after many years of careful deliberation, fair amount of prayers, and the benefit of science, if all goes according to plan, in about six weeks' time, I'm going to become a father, thanks to a wonderful surrogate who is carrying my future," the Bravolebrity shared, as screams erupted from the audience and from nearby Real Housewives Teresa Giudice, NeNe Leakes, Vicki Gunvulson, Kyle Richards, and Ramona Singer.

"Family means everything to me, and having one of my own is something I've wanted in my heart for my entire life," the host continued. "While it has taken me longer than most to get there, I cannot wait for what I envision will be my most rewarding chapter yet." Cohen added, "This has been an incredible, joyous journey with you all. I am grateful to live my dream every day and grateful to you for coming along for the ride. I don't take any of it for granted."

Of course, the congratulations for the celebrity whisperer poured in within moments after he announced he would be a father, and Comments by Celebs captured every moment. Many celebrities—from John Mayer to Kelly Ripa to Taylor Lautner—offered up their good wishes and congratulations to Cohen in the comments on his Instagram post announcing his new baby. "You were already a daddy now you're just going to have a baby! Congrats! Can't wait to meet them," Olympic skier Gus Kenworthy commented on Cohen's video.

Even though Cohen, 50, is about to get started on those baby preparations, he has one more big thing to take care of before 2019 begins: He'll be ringing in the new year on CNN's New Year's Eve special alongside longtime friend Anderson Cooper, filling in for Kathy Griffin, who was fired by the network after a controversy surrounding her comedic video that depicted a beheaded Donald Trump.