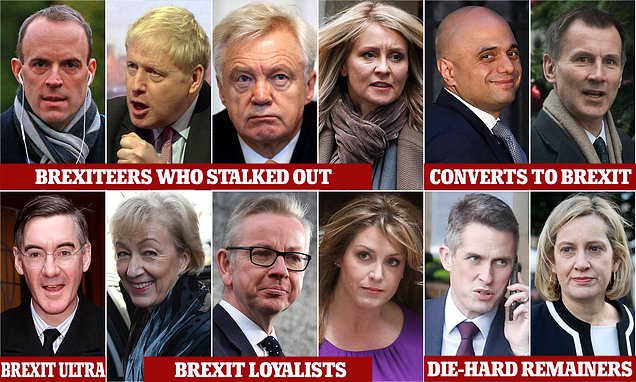 When Theresa May promised to bow out after Brexit she fired the starting gun on the Tory leadership race. With Raab in front and Javid and Johnson behind him, ANDREW PIERCE asks who will replace her as PM?

With his double-breasted pinstripe suits and impeccable manners, the 49-year-old has been ridiculed as ‘the honourable member for the 18th century’.

Chairman of the European Research Group, a cabal of ultra-Brexiteer Tories who have botched their attempts to unseat Mrs May. And his increasingly personal attacks on her have damaged his standing among fellow Tory MPs and activists.

The son of a former editor of The Times, he divides his time with his wife and their six children between a £4.5 million house in Westminster and a 400-year-old mansion at the foot of the Mendip Hills.

He used to top polls of party activists when they were asked who they wanted as next Tory leader. But his recent disloyalty to Mrs May has seen his ratings plummet.

Always says he doesn’t want the top job — which is just as well. After May’s comfortable victory, there’s now more chance of Tony Blair coming back as Labour leader than Rees-Mogg assuming the Tory crown. 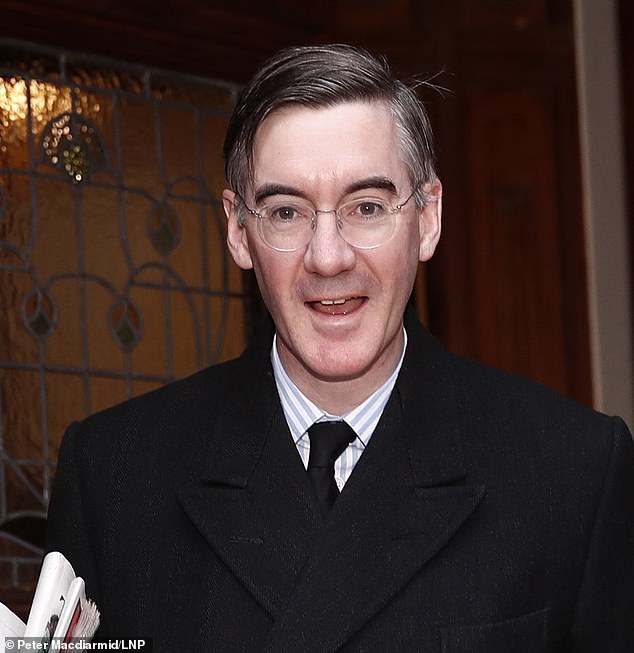 Brexiteers who stalked out

Cerebral lawyer who’s the son of a Czech-born Jewish father who came to Britain in 1938 aged six as a refugee from the Nazis.

‘I cannot support an indefinite backstop arrangement, where the EU holds a veto over our ability to exit,’ he said. Ubiquitous on TV and radio, but not everyone is impressed. ‘Dominic is his own biggest fan,’ says one Tory MP. ‘He’s just a bit too clever.’

A black belt at karate, the 44-year-old could form a joint leadership ticket with David Davis. 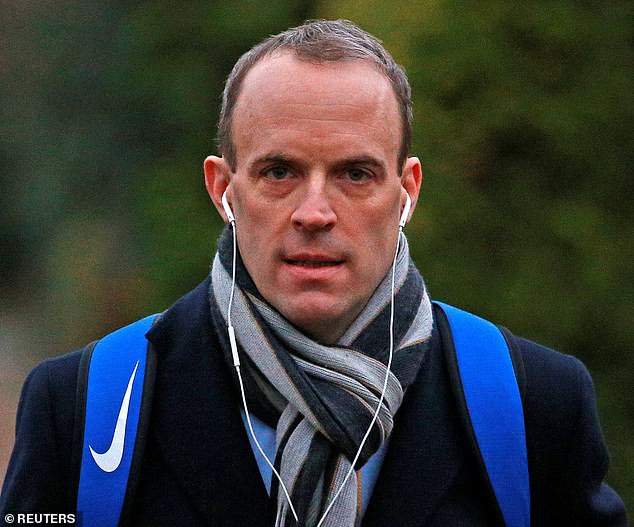 Clearly on manoeuvres — the 54-year-old having just cropped his signature tousled hair and lost 12lb.

The most passionate frontline Tory advocate of Brexit — describing the PM’s deal as ‘diabolical’ and a ‘legal lobster pot’. As ever, he is long on bombast, short on content. Long on grandiosity, short on self-awareness.

As one of the most hardline Brexiteers, he is hamstrung by a lack of support among fellow Tory MPs, which means he’ll struggle to make it to the final two of any contest. But a restless soul, backbench life will not suit Johnson.

A long-term Leave advocate brought back into government by May (before he quit in a huff) having first served as Europe minister in the Major government. The victim of a whispering campaign about his time as Brexit Secretary when the 69-year-old was accused of being lazy, having held only five hours of meetings in Brussels in 2018.

A serious contender, but his best hope is as a stop-gap leader before handing over to a younger deputy. 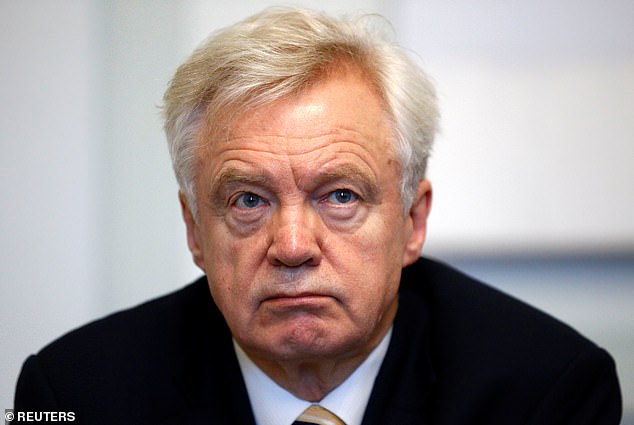 A Barnardo’s child whose father was variously a scrap metal merchant and an ice cream van driver. Before politics, the Liverpudlian was a breakfast TV presenter.

Resigned as Work and Pensions Secretary in protest at May’s EU withdrawal document.

Asked on Sunday if she’d run, Mrs McVey, 51, said she would ‘if people asked’.

Though she might have to wait a long time before anyone asks her, as she has yet to prove she has any intellectual depth.

Her political mentor is Eurosceptic Iain Duncan Smith, and Mrs McVey has been the MP for the Tatton, Cheshire seat — vacated by Europhile George Osborne — since 2017. 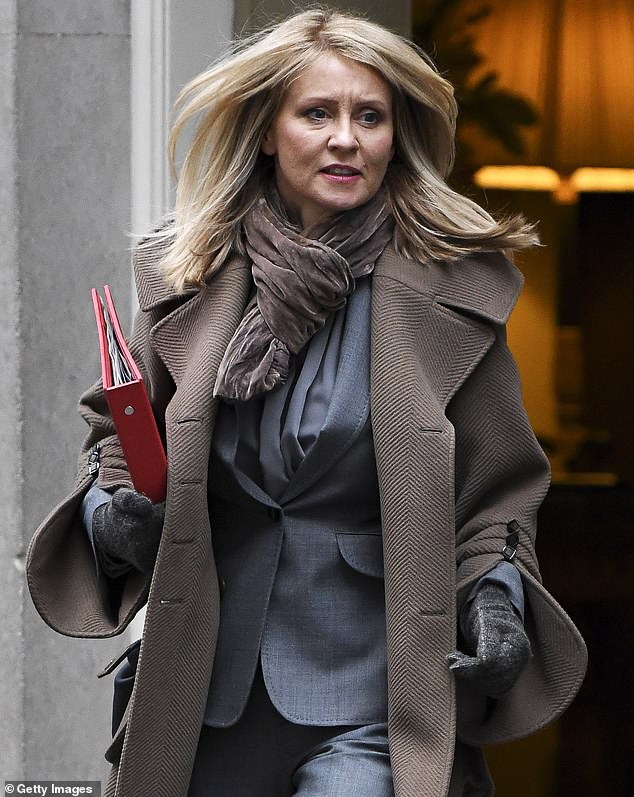 Has enjoyed a rapid rise over recent years — thanks to his naked ambition, matinee idol good looks and a penchant for theatrical power play.

As May’s Chief Whip, he was rewarded for running her leadership campaign with the job of Defence Secretary.

Best known for having kept a tarantula in a glass box on his Commons desk, seemingly to intimidate Tory MPs who stepped out of line.

Tried to soften his image by saying: ‘I don’t very much believe in the stick, but it’s amazing what can be achieved with a sharpened carrot.’

His time at the defence ministry has been fraught — being dubbed Private Pike, after the hapless youth in Dad’s Army, by some service chiefs who see the 42-year-old as a lightweight.

Early this year he confessed to having had a long-ago office romance with a colleague around the time his first son was born, admitting he ‘nearly destroyed two marriages’.

A rank outsider — with critics saying only he thinks he has leadership qualities. 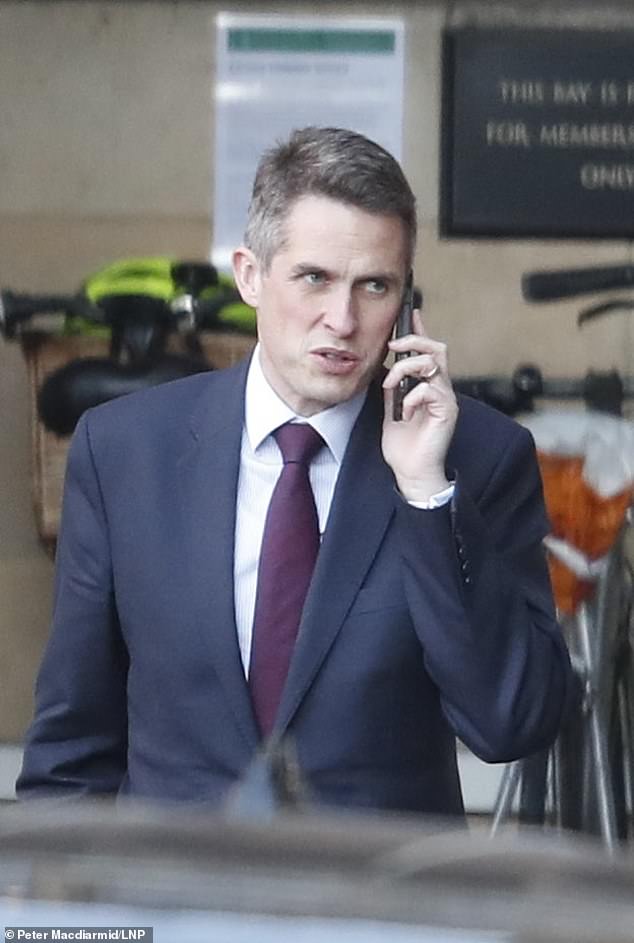 Broke ranks with Mrs May at the weekend when she conceded the possible need for a second referendum. But generally an ally of the country’s second woman PM, complaining that men at Westminster ‘seem to flounce out quite a lot’.

Brought back into the Cabinet recently after being forced to resign as Home Secretary over the Windrush scandal in April. The 55-year-old’s Achilles heel is the fact that she has a majority of only 346 in her Hastings and Rye constituency.

An alumna of Cheltenham Ladies’ College, she was ‘aristocracy coordinator’ for the film Four Weddings And A Funeral and was previously married to the late restaurant critic A. A. Gill.

Her millionaire PR guru brother Roland was a leading figure in the Remain campaign and is now noisily calling for a second referendum.

Now Welfare and Pensions Secretary, Rudd is considered an unlikely successor to Mrs May because of her steadfast support for the EU — something not appreciated by the Eurosceptic Tory grassroots. 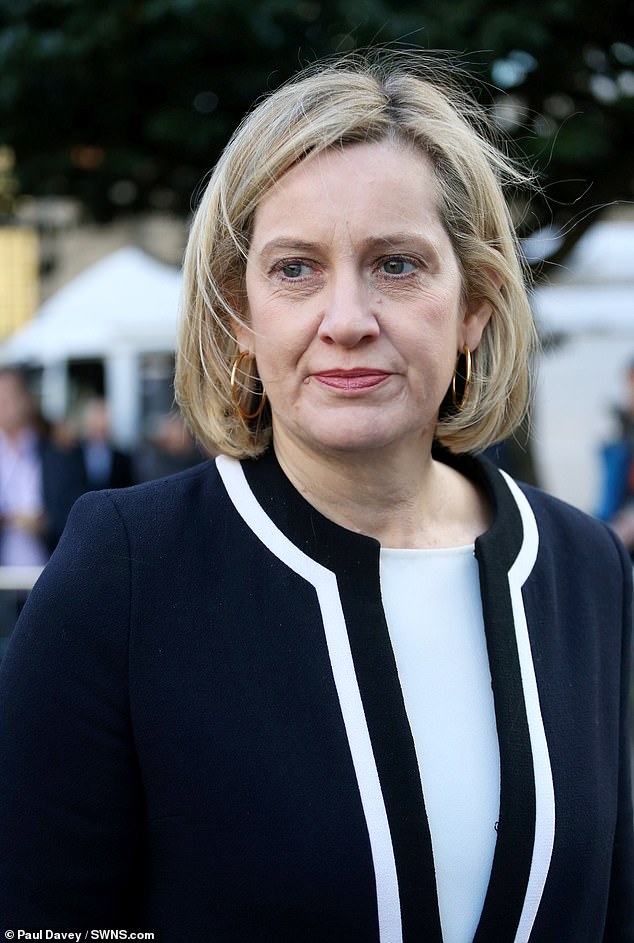 A leading figure in the Leave campaign and, expecting Boris Johnson to run for leader afterwards, asked him to make her Chancellor if she supported him.

The 55-year-old’s own bid for the leadership foundered after allegations she’d exaggerated her City career. She then withdrew from the 2016 leadership race after apologising to Theresa May for suggesting being a mother made her a better candidate.

Environment Secretary in May’s first Cabinet, but was out of her depth.

Not even worth an outside bet. 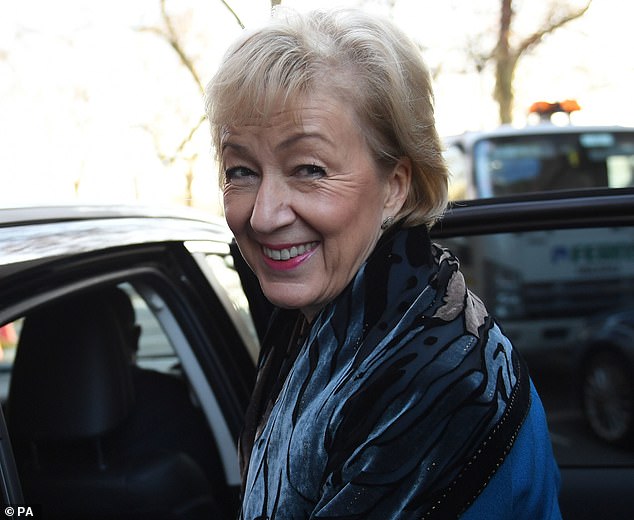 Despite being a die-hard Brexiteer, the Environment Secretary has taken a high-wire stance of staying in Mrs May’s Cabinet.

Has toured TV and radio to defend the PM’s Brexit plan, which he says is not ideal but is better than a ‘calamitous’ no deal.

The 51-year-old will run if enough senior party figures urge him to.

Joked this week that he might ‘if Boris Johnson nominated me and Philip Hammond seconded’. More likely to back another candidate rather than stand. 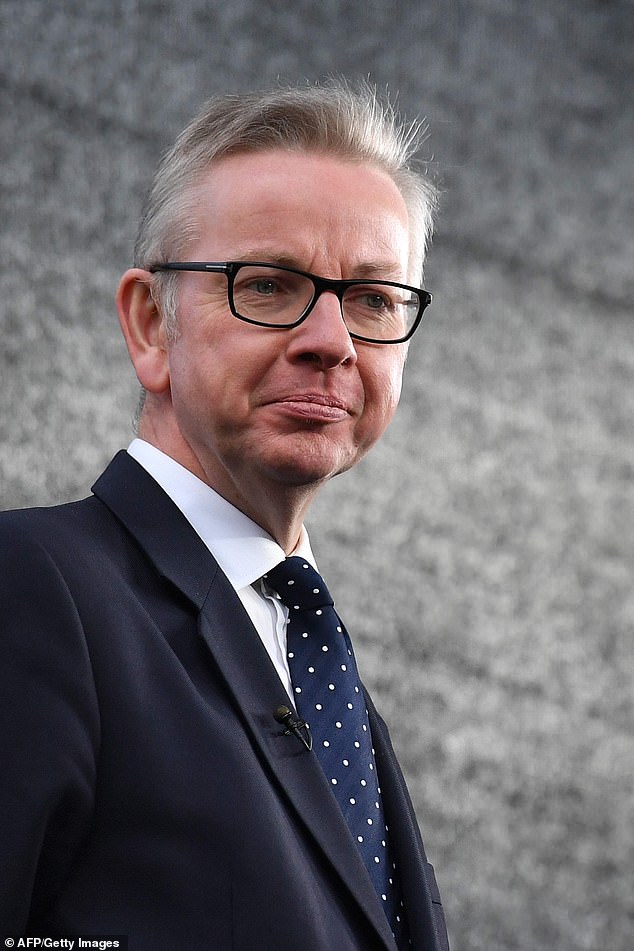 The Home Secretary was always regarded as a Brexiteer until he came out for Remain in the referendum.

Javid, 49, now describes himself as an enthusiastic Brexit convert, but is viewed with suspicion by hardliners.

He is also a boring speaker and is regarded as dull and unimaginative by many fellow Tory MPs, with little to offer politically. 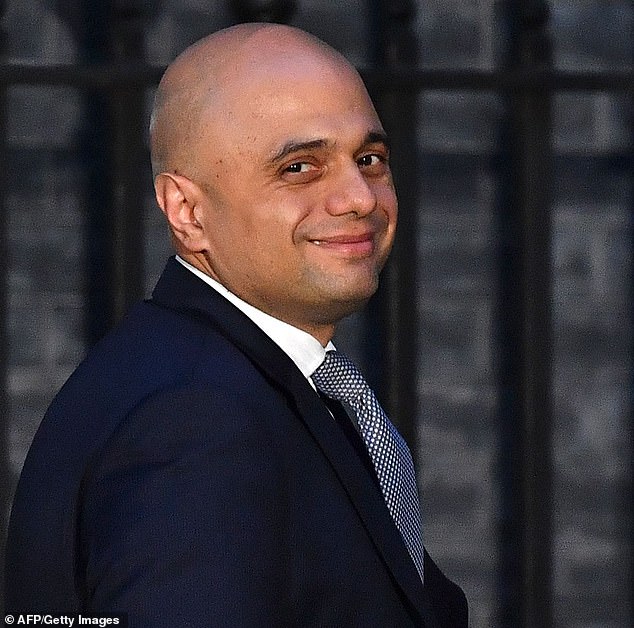 A former Remainer whose reputation has been boosted by his strong six-year record as Health Secretary, which ended when he replaced Boris Johnson as Foreign Secretary.

Affable and quietly authoritative, the 52-year-old has built a loyal following on the backbenches. A convert to Brexit, but vehemently opposed to leaving with no deal. 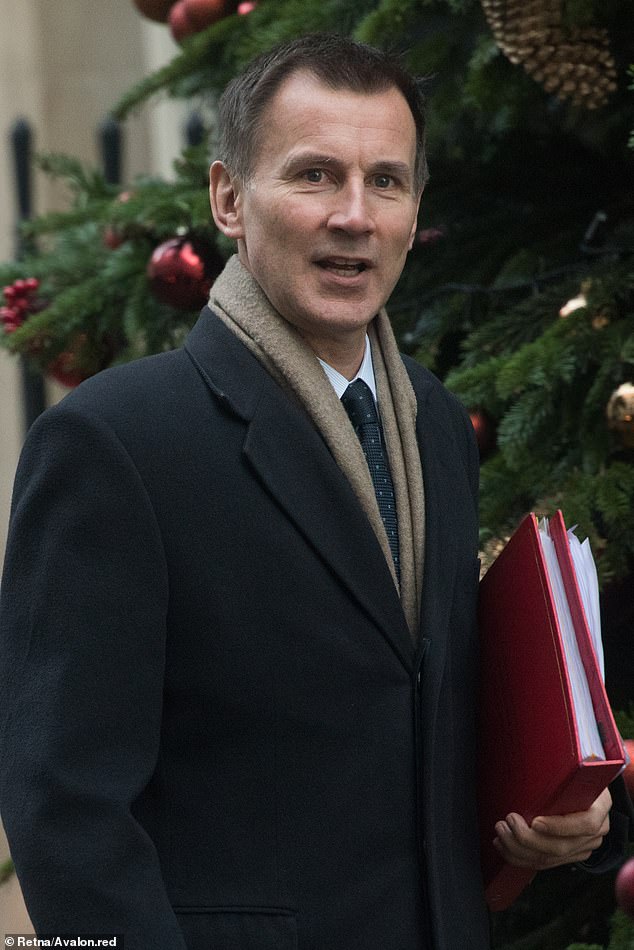 Daughter of a former Para and named after frigate HMS Penelope.

The 45-year-old has been MP for Portsmouth North since 2010 and first came to prominence wearing a swimsuit to appear on ITV’s celebrity diving show Splash!

A naval reservist, she was first female Armed Forces minister before being promoted to Cabinet as International Development Secretary.

Was the most outspoken critic at the Chequers summit on the Brexit plan, but decided not to resign.

‘Not sure she’s clever enough to go to the top,’ said one former Cabinet minister last night. 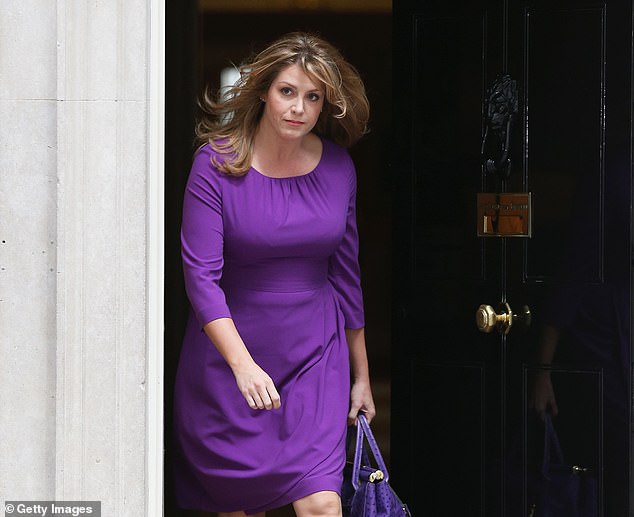