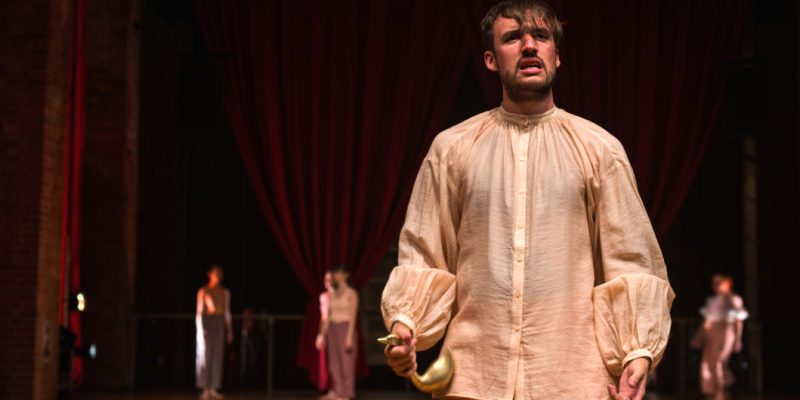 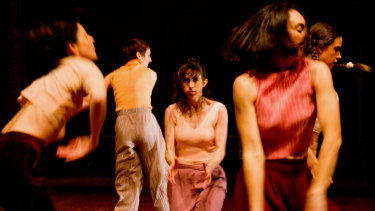 I would be hard-pressed to name the central theme of Lady Example (the program notes unhelpfully claim that it is 'women', which seems like a prank). It is a remarkably self-assured work, despite the obvious pitfalls of blending dance, theatre and audience interaction; despite the relative inexperience of its makers (who appear to have only just settled on their ensemble name); and despite involving nine performers of varying abilities.

If it sounds like too many disclaimers, it is because Lady Example is a small miracle: a phenomenal show that works even though, by all means, it should collapse under its own towering ambitions. I should add that I saw it on the night when the show had Auslan interpretation and one performer was ill; the missing performer didn't make a difference and if anything the interpreter's constant stage presence made the show better.

Alice Dixon and Caroline Meaden are dancers, while Will McBride comes from text-based performance. Accordingly, Lady Example opens with dancing that brings together the whole ensemble: a lot of Cunningham but with strong inflections of something early modern, almost Bauhaus-like.

It then suddenly switches into spoken word. Caroline and Will's flirty dialogue comes out of nowhere, then morphs into a conversation with the audience in which we are warned to be polite and not ask stupid questions after the show.

Chekhovian conversations follow – between a businesswoman and her lethargic artist lover – but also more dancing, including to '80s hit Bette Davis Eyes. At various points we are expressly told where to look (“Look at Will. Will is it.”). A large collection of porcelain swans appears at key moments. 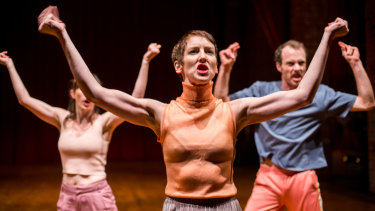 Lady Example reminded me of seeing Hayloft Project's first shows and the magic of encountering a fully-formed work by young, unknown artists. That comparison extends to the style, too: conversational but very polished dialogue, utter precision of movement and an impeccable set design of a slightly timeless world that inflects an aristocratic Europe through an inner-city Australian sensibility.

Lady Example is more style than substance – its many brilliant elements do not quite come together, and other than a vague sense of social obligation and emotional hunger, I was at a loss as to what its central point may be (it is not 'women').

But every minute of it was absorbing