Move over Gaga, there’s a new billboard in town! In promotion of her new special Amy Schumer Growing, Amy Schumer channelled the marketing campaign of A Star is Born, putting out a billboard which swapped her name and face with Lady Gaga’s — and it’s a publicity stunt that’s almost too good to good for words. Entertainment Weekly notes that the new advertisement is a marketing spoof of a billboard that featured Gaga‘s A Star is Born character Ally against a pink and blue background with the name “ALLY” which was placed on L.A.’s Sunset Boulevard. The publication reveals that the original billboard was placed on the same street as part of the critically-acclaimed film’s recent Oscar campaign back in January. Schumer’s parody, which was placed not too far away, features a photo of the comedian with the same color scheme with her name “AMY” similarly printed in bold letters below. And, you’ve just got to see it for yourself.

Netflix also tweeted a photo of the billboard promoting the comic’s special which is due to make its premiere on the streaming service March 19. Growing is Schumer’s second stand-up special at Netflix and arrives as the follow-up to her special Amy Schumer: The Leather Special which was released on the platform in 2017. Along with a snapshot of the advertisement, Netflix shared, "There could be 100 billboards on Sunset Boulevard and 99 don’t promote @amyschumer’s new stand-up special — but one does." 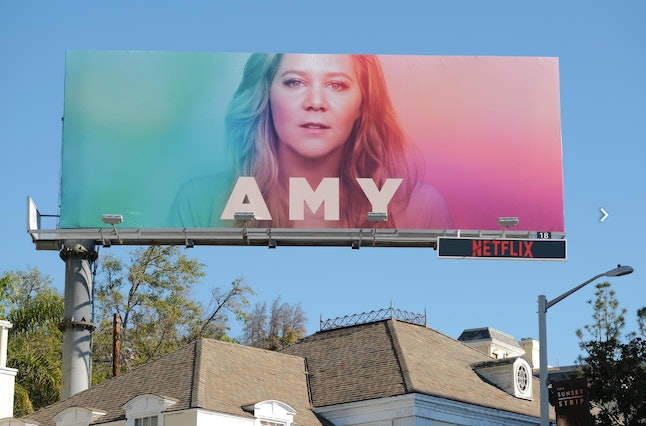 The 37-year-old comic took to Instagram to share a top and bottom comparison of the billboard photos featuring herself and Lady Gaga. Quoting lyrics from the song "Shallow," which was featured in the Oscar-nominated film, Schumer added, "We’ll never meet the ground ? #becausewearebillboards"

Schumer, who is currently pregnant with her first child, announced the new special’s arrival on February 12 via an Instagram video which teased fans about the sex of her unborn baby. 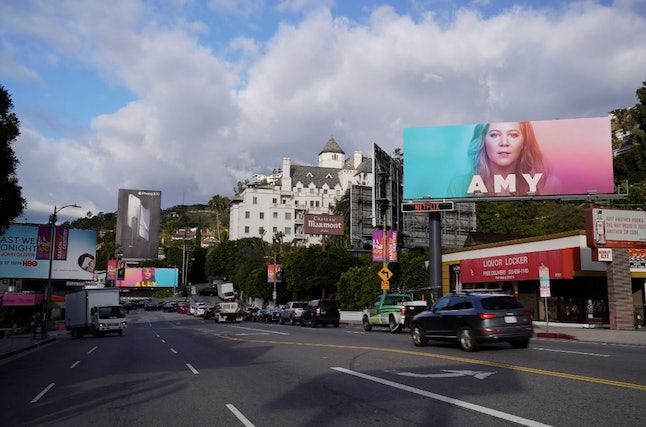 “Hi guys! It’s me, Amy," she shared in the Instagram video adding, "I know it probably seems like I’ve been pregnant for like 1,000 years to you guys. It’s not just all relaxing and eating donuts" as she bit into a donut. She joked that she initially wanted to announce the sex of her baby, but then went on to reveal that she and her husband, chef Chris Fischer, don’t care about their future child’s gender identity just as long as they don’t identify as a DJ. After playing around a bit, Schumer cut to the chase, revealing her new special and its upcoming release date.

Although Schumer has been coy about details surrounding her pregnancy, it seems that the topic of childbearing will be one of many topics discussed in the stand up. Deadline notes that Schumer will give fans a "honest and hilarious take on marriage, pregnancy, and personal growth" throughout the special which was filmed during one of her performances in Chicago.

The announcement is certainly a genius move as it ties itself to one of last year’s most popular films. However, it comes as no surprise, given Amy Schumer’s comedic brilliance.