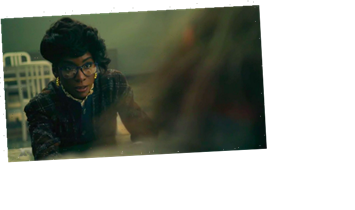 SPOILER ALERT: Do not read if you have not yet watched “Slashdance,” the third episode of “American Horror Story: 1984.”

When last we left our intrepid “American Horror Story: 1984” camp counselors, they had split into two groups and each seemed to be facing one of the killers at their respective doors. However, nothing is ever as simple as it appears on “American Horror Story!” In this case, it turned out that the Night Stalker (Zach Villa) was at the infirmary, but it was not Mr. Jingles himself (John Carroll Lynch) but rather a couple of local teenagers donning Mr. Jingles masks who were attempting to terrorize the about-to-be-reopened camp.

That’s right, in this town kids pull pranks on local businesses on the anniversary of the Camp Redwood massacre. Two of them threw a bag of human feces into the cabin and proceeded to celebrate their cleverness — until the real Mr. Jingles appeared and killed them both, which conveniently gave Trevor (Matthew Morrison), Xavier (Cody Fern) and Montana (Billie Lourd) time to escape. Redshirts for the win!

Interestingly, the real Jingles encountered one of the imposters — a nerdy kid who Jingles let babble on for a minute before also letting him walk away. Was it a rare moment of compassion, or does Jingles have a M.O. that has yet to become explicit? Maybe he needs his victims to exhibit fear of him first; maybe he needs them to be sinners who he will then punish; maybe he just saw himself in this kid — or maybe he just needed a break. Trekking through the woods can be tiring.

As everyone ran back for the cars, Chet (Gus Kenworthy) and Ray (DeRon Horton), who escaped the infirmary and therefore the Night Stalker’s clutches but not danger completely, found themselves at the bottom of a spike-filled hole. Ray managed to avoid the spikes, but Chet was not so lucky, getting skewered through the shoulder. After he passed out from the blood loss, Ray took that chance to confess a terrible secret — the reason he left Los Angeles for the summer. Cut to a flashback to one year ago when Ray was just a frat brother hazing new pledges.

During “hell night,” a drunk pledge fell down the stairs, and Ray, assuming he died, said he would “take care of it” so the frat wasn’t in trouble. He decided to make it look like a drunk driving accident, so he put the pledge in a car and began to push it off the cliff. Of course the pledge woke up right at the last minute, and Ray couldn’t stop the car in time. He felt so guilt-ridden that he dropped out of school and now he was freaking out because the news reported that the cops just found the kid’s car — and they’ll find Ray’s watch inside because the pledge pulled it off as he grabbed Ray’s arm. Ray was relieved to get this off his chest until he realized that Chet was actually listening. So he jumped out of the pit and ran off.

Meanwhile, Rita (Angelica Ross) and Brooke (Emma Roberts) waited back at the cars, but when nobody showed up, Brooke wanted to go for help. Rita gave Brooke the keys and then — twist! — injected her with a drug when her back was turned. Turned out the nurse was a double agent.

And cue another flashback, but this time only to one week ago. Rita showed up at the mental hospital in which Jingle was housed. She was going by the name Donna Chambers and claimed to be a doctoral student who had gotten many serial killers to open up to her. Allowed to sit with Jingles for an interview, he did the same — after she told him he’s not evil, that perhaps it was his Vietnam war training and experience that made him kill.

Interestingly, Jingles told Rita/Donna that he told the doctors he didn’t remember killing those kids at the camp. Is that true? It would lend some credence to the theory that Margaret (Leslie Grossman) is somehow involved.

Anyway, Rita/Donna encouraged Jingles to break out of the hospital so that she could study him in his natural habitat. Her goal was to “crack his code” and use that to make sure there are no more serial killers. She wouldn’t tell him what her reasons were for pursuing this, but she assured him that he was not evil or irredeemable. After telling him how to escape, Donna followed the real nurse Rita (Dreama Walker) to camp, kidnapping her after they both stopped at a gas station, and stealing her uniform and car.

Back in the present, as Trevor, Xavier, and Montana sneaked back to the cars, Trevor showed some real human decency by saying they had to try to save Margaret and Birdy the cook. When they heard Jingles coming, however, they hid in the boathouse and found a bound and gagged Nurse Rita — the real Rita. They took the tape off her mouth and her scream alerted Jingles, who promptly skewered Rita with an oar to the mouth. After he left, the horrified Xavier, Trevor and Montana saw the name on her uniform.

On their way to the parking lot, the trio ran into Ray, and Trevor gave him the motorcycle keys and told him to take Montana and go for the call box down the road while they tried to save some of the others. They happened upon Chet in the pit and Xavier came down to help him, leaving Trevor topside by himself. When someone rustled in the bushes, Xavier had to pull Chet off the spike as fast as he could, which went about as well as you’d expect. But, they both survived — at least for another episode.

When Jingles appeared, Trevor charged him and sent him falling into the pit — except it wasn’t Jingles. It was that nerdy kid the real Jingles had let go earlier in the episode. Oops.

As the episode wound down, Ray and Montana managed to make it back to the parking lot unscathed, only to encounter the Night Stalker. True to fashion, Ray hopped on the bike and left Montana for dead, but he got his comeuppance when Jingles stepped out of the bushes and decapitated him as he rode by. That’s kind of what you get for killing that pledge and leaving two of your friends to die, Ray.

But in a twist as big as the faux Rita reveal, when the Night Stalker advanced on Montana, the two of them furiously locked lips and then Montana asked him, “Why the hell haven’t you killed her yet?” Twist! Who is “her”? Probably Brooke, right? Guess we’ll see.

So, at this point: Rita is working with Jingles; Montana is working with the Night Stalker; Margaret might be working with one or both of them as well, and she might also be more responsible for the massacre in 1970 than has thus far been shown. Can’t wait to see what “American Horror Story” throws at us next week!