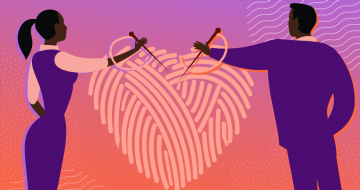 Julia, whose name has been changed for privacy reasons, was away at university when her brother and her father had a falling out.

“My parents divorced when I was six, and Jim (whose name has also been changed) was four,” Julia said. “Jim and my dad always had a tricky relationship and would go through periods of estrangement growing up, but typically they would last no longer than a few weeks.”

Jim, then 16, was staying with his father and his stepmom while his mom and stepdad were away on vacation. That’s when he and his dad got into an argument.

“My dad called me at university and told me that Jim had left while he was in the shower, leaving a note for him explaining that he would be at our mom’s house, which was empty,” said Julia.

“My dad tried to call… but my brother wouldn’t answer the phone… [so my dad] called my mom to let her know what was happening and explain that he didn’t think it was appropriate for a 16-year-old to be alone for a week.”

Julia’s mom said she thought it was fine. Her father was furious, but he couldn’t do anything else.

“That was the beginning of the end, and they didn’t speak for the next eight years,” Julia told Global News.

Jim and his father have since reconnected, but it was a slow and painful process that hurt them and the people close to them. Julia believes the divide was a large contributor to her generalized anxiety disorder.

“It was definitely a catalyst in forcing me to come to terms with my mental illness and to start working on healing and moving forward,” Julia said.

“It absolutely deepened a lot of the harmful patterns that I learned in childhood. Specifically, feeling like I had to play the role of peacekeeper and ‘fix’ my family’s issues, ensuring everyone was happy and contented before I could have a hope of feeling safe or remotely content myself.”

Julia says she often felt responsible for fixing the rift between her dad and brother, being one of the only people who still interacted with both of them.

Julia and her mother often had clashing opinions about the conflict, which led to estrangement on a smaller scale.

“I felt she was too easy on my brother, made too many excuses for his behaviour and constantly blamed and shamed my dad to me,” Julia said.

“We worked through it, but I don’t think my brother or dad ever really understood the extent to which their issues rippled throughout the rest of our fractured family.”

It’s not uncommon for a period of estrangement to have a lasting impact on a family, said psychologist Joshua Peters, who works at the Centre for Interpersonal Relationships.

The trauma can be felt across generations and even by relatives who weren’t involved.

That’s why reconnecting can be tricky. Here’s how to establish a new connection (or even reconnect with someone) while protecting yourself.

Create strict boundaries for yourself

Those involved in these kinds of situations need to “honour themselves and not take on everybody else’s stuff,” said Andriana Mantas, a Toronto-based psychotherapist who specializes in family conflict.

This means thinking critically about if reconnecting is good for you — even if you weren’t one of the parties directly involved in the initial separation.

“There’s a lot of healing [to be done] and a lot of different emotions taking place. Things have changed, time has elapsed and different people have experienced different things,” Mantas explained.

If you decide to try and rebuild a relationship, it needs to be on your own terms.

According to Peters, it’s important to have an explicit conversation about your expectations of others post-reconnection — especially if you have other family members who don’t want to rebuild a relationship.

“Assure that individual that you will still love and care for them, regardless of what relationships they may decide to engage in,” Mantas said.

It was only when Julia removed herself from the situation with her brother and her dad that it started to improve.

“I actually ended up stepping away from feeling like I had to fix their relationship for my own sanity and health, which was a good thing,” Julia said.

“I learned their reconnecting really had to come from them.”

First, you need to determine if the desire to reconnect is mutual.

“Sending emails or reaching out via text or anything along those lines is probably a good way to start,” said Mantas.

After making initial contact, you can decide if reconnecting is truly in your best interest.

“It’s really about honouring yourself… as you get back into the groove,” Mantas said. “Clearly, what was taking place [before] was not working. How do you want to do things differently [this time]?”

For Mantas, there needs to be a focus on creating a healthy arrangement between all parties.

“If you meet in person… definitely do it in a neutral territory where everyone feels safe,” she said.

In Mantas’ experience, it’s best to set a time limit for yourself for initial meetings.

“Make sure you’re not there for two, three, four hours if you don’t want to be. It’s not a free for all,” she added.

A casual, unplanned reconnection is what worked best for Julia’s family.

“It didn’t happen all at once, but slowly, they started speaking casually,” she said.

“I remember one Christmas a few years ago, when they seemed to be on the precipice of connecting, I made a childlike Christmas ‘wish’ that they would make up. They started talking that Christmas again, and it felt like magic.”

Reconnecting doesn’t work for everyone

Readiness is key. If you don’t feel ready to confront your family or the traumatic events that occurred, don’t do it.

“Everyone experiences trauma differently. It could easily bring up some triggers,” said Mantas.

If that happens, know that you can decide you no longer want to have a conversation with someone about past ills.

“You’re allowed to stop the conversation and say, ‘At this time, I prefer not to speak about this,’” she added.

For Peters, sitting in tension can actually help you figure out if you’re ready to reconnect with someone.

“Understand that this person is both someone who has hurt you and that you may need to protect yourself from them but… also [that they’re] someone that you can see with empathy,” said Peters.

If you can do that, it may be time for you to find a safe space to reconnect with them. Just remember things may not go smoothly.

“Don’t force it,” said Mantas. “Make sure things don’t just go back to the way they were… because that wasn’t working.”

Remember that you have a choice. If revisiting the trauma is too difficult for you, then you don’t need to do it.

“Ask yourself whether this person is truly aligned with your values,” Mantas said.

Julia’s situation has improved, but her brother will still periodically disconnect from the rest of her family, which can be trying.

“I think he does that when things aren’t going well for him and he doesn’t know how to deal with it or ask for help,” said Julia.

Earlier this year, Julia sent Jim an e-gift for Christmas and never heard anything back. Then, last week, Jim commented on one of Julia’s Instagram posts.

“It hurts, but I’m used to it now, and it’s better than no relationship,” Julia said.

“All of us have come so far. Reconnecting isn’t always the right thing, but for us, both the estrangement and the wounds gave us all a chance to expose and heal. It wouldn’t hurt so much if we didn’t love so much. So that’s something.”