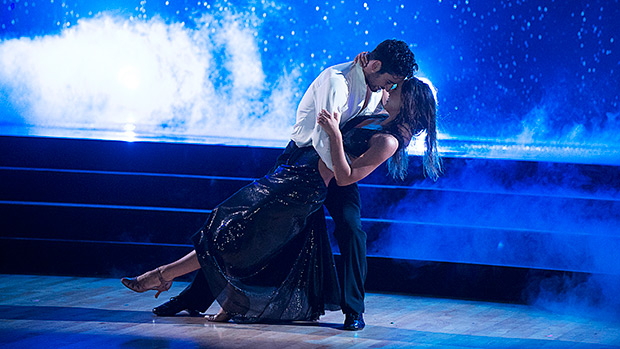 Alexis Ren and Alan Bersten are the most talked-about duo of ‘DWTS’ season 27. They’re not only partners, they’ve developed real feelings for each other! Take a look at their hottest ‘DWTS’ moments ahead of the finale!

Alexis Ren, 21, and Alan Bersten, 24, have been turning up the heat on Dancing With the Stars all season long. Their chemistry was on fire from the very beginning, and we’ve seen these two go from just dancing partners to something more. Alexis was the first to admit she had feelings for Alan. “We communicate not just through our steps or our movements but with our hearts too,” Alexis said on DWTS. “I am developing feelings for Alan, and I didn’t see this one coming. It happened really quickly though, so I think I’m still trying to process it.”

Things took a turn when they shared their first kiss while preparing for their “Country Night” dance. They went on a romantic horseback ride and ended up locking lips. Their kiss was sweet and totally swoonworthy. Ever since their kiss, Alexis and Alan’s connection has only gotten stronger. Their dances have gotten even hotter.

Alexis and Alan have had to defend their romance to the haters. “People are going to hate either way, so I should just say my truth and say my feelings. If they take it one way or another that is their perception of the situation and not mine,” Alexis told reporters, including HollywoodLife, after the semi-finals. Alan is constantly gushing over Alexis on Instagram. “I am so proud of you @alexisren thank you for trusting me this week,” Alan wrote in Oct. 2018. “I can’t wait for you to go out there and live this moment.”

Take a look at more of Alexis and Alan’s hottest moments on DWTS season 27 in our gallery above. Be sure to watch the Dancing With the Stars finale on Nov. 19 at 8 p.m. on ABC.