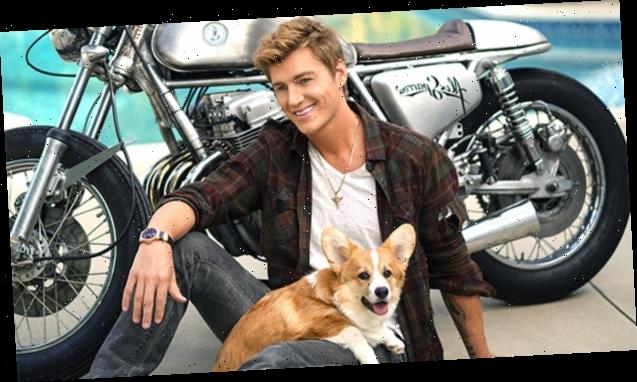 While facing the ‘coronapocalypse,’ Alex Sparrow and his adorable pooch transform quarantine into a delightful (and safe) paradise – while delivering some much-needed advice – in his breathtaking new music video.

It’s a given that in any other year, in any other timeline, the video Alex Sparrow’s “Let’s Stay Home Tonight” would be something completely different. Yet, the singer, actor, and former Eurovision contestant took this opportunity to turn lemons into lemonade, and what we’ve got is something incredibly special. In the visual, premiering here on Hollywood Life, Alex ventures the deserted coronavirus wastelands, only to find love (and the last roll of toilet paper.) With his dog Mozart and his new girl by his side – but not too close – they go for a bike ride, have a beach trip, and even catch a drive-in movie. Or do they?

Actually – spoiler alert! – they don’t. In a #stayhome twist, the adventure is all virtual. The beach trip. The ghost town. The stunning lake with the swing-set in the middle of it. It was all made possible thanks to some VR goggles. After all, the message of the music video is in the title: as the COVID-19 pandemic continues across the world, why risk spreading it? Instead, let’s ‘stay home tonight’ and stay safe. Plus, who would want to go anywhere without that adorable corgi?

On the one hand, it’s unfortunate that due to circumstances that are out of control, Alex’s song and video will be forever linked to this global calamity. “Let’s Stay Home Tonight” boasts some ingenious songwriting and lyrics that deftly capture that side of romance — how the rest of the world and all its social commitments pale in comparison to one night at home with your significant other. It’s the introvert’s love song, and this fantastic slice of pop from Alex should be celebrated independently of the coronavirus pandemic. Yet, on the other hand, perhaps this is the moment that “Let’s Stay Home Tonight” was meant for? If that is the case, Alex knocked it out of the park.

“The essence of this song is that you don’t need to be out and about, chase the next rush and make big plans – it’s about living in the moment and appreciate what you have,” Alex tells HollywoodLife. “I wrote this song a while back and have thought about the right timing of when to release it. And if not now, then when?”

“When I wrote this song a year ago I couldn’t even imagine that these very personal lines would become a symbol of what we all are going through now,” Alex posted to Instagram (along with an adorable montage of Mozart, his corgi.) “I had planned to release this track on my upcoming album but decided to release it now because I want you all to feel that «staying home» is not about hatred, fear, and restrictions, but about love, caring for our communities and the pleasure of being with our loved ones.”

Fans better heed Alex’s advice, because they’ll want to be around to see what’s next for this multi-talented star. For those who don’t know, most of Europe has fallen for Alex, as he’s the winner of the Russian version of The X-Factor, the winner of both Dancing and Skating With The Stars, and he was Russia’s entry in the 2011 Eurovision Song Contest (Azerbaijan ultimately won with Ell & Nikki’s “Running Scared”). He went viral with “She’s Crazy But She’s Mine,” a youtube that boasts more than 980 million views on Facebook and more than 250 million on YouTube.

He was about to blow up in the US when an accident, followed by a massive stroke, left the left side of his body paralyzed. After two years of rehabilitation, he’s about to take off — literally. Alex will touch the stars when he appears opposite Steve Carell, John Malkovitz, Tawny Newsome, and Ben Schwartz in the upcoming Netflix comedy, Space Force. It premieres on May 29, so #StayHome and binge it when it drops.