The Albanese government would look hypocritical leading a Pacific nations bid to host a United Nations climate conference, according to regional statesmen, as Australia’s own emissions’ reduction target falls short of what is needed to keep global warming to 1.5 degrees. 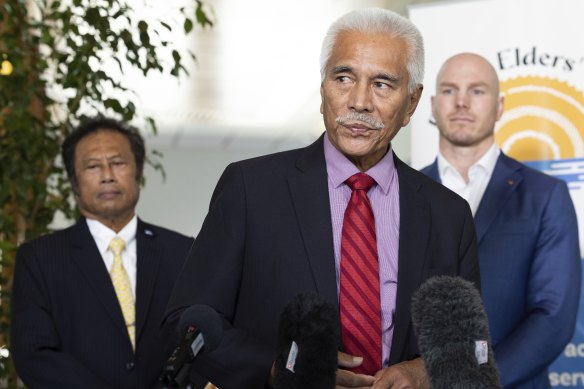 Australia has pledged emissions reduction levels consistent with limiting global warming as close as possible to 1.5 degrees. Labor’s 43 per cent target, passed into law on September 8, is consistent with 2 degrees warming or more.

The Albanese government has said it would support new coal and gas projects if the economic and environmental cases stack up.

Warnings from Pacific leaders follow a report from the United Nations’ World Meteorological Organisation on Wednesday that said the current emissions reduction commitments from nations around the world must be seven times higher to get global warming on track to be limited to 1.5 degrees.

Pacific nations will need to endorse the Albanese government’s bid to the UN to host the next climate conference, known as the Conference of the Parties (COP), which will set the next benchmark for global emissions targets. But Tong said it would be hypocritical for Australia to lead a bid to host the conference while it was supporting new fossil fuel projects.

“It would appear to be a contradiction, wouldn’t it? I mean, it doesn’t make sense,” he said.

“We support Australia hosting, because it would be in our part of the world, we would be part of it. But to be part of something that’s not doing the right thing is wrong.”

Remengesau said Australia was the “big brother” of the family of Pacific nations and a bid from the region to host a COP would be hypocritical if Australia, as its leader, was not meeting the requirements of the Paris Agreement.

“The COP is a forum that really should be addressing the implementation, the progress, the results that we so need and we cannot morally be right to ask people to come when we’re not doing enough.”

Climate Change and Energy Minister Chris was contacted for comment.

Bowen said in April, ahead of the federal poll, Australia would bid to co-host a Conference of the Parties (COP) with its regional neighbours to showcase Labor’s climate policy.

“Seeking to host COP with those Pacific partners who wish to co-host it with us will be an excellent opportunity to remind the world about the issues at stake and enable our Pacific brothers and sisters to make their case to the world in a most direct way,” Bowen said.