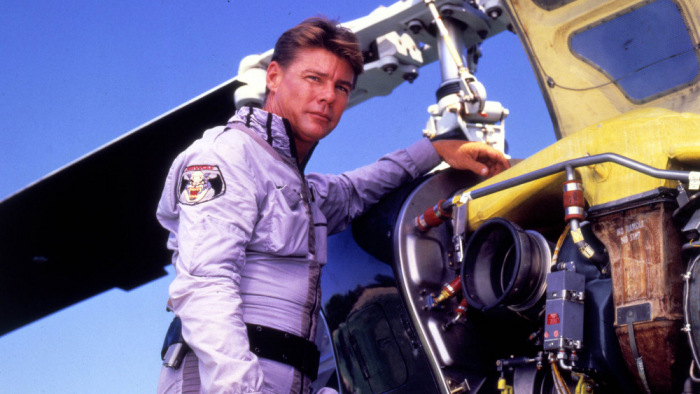 Jan-Michael Vincent, best known for playing the lead role in the 1980s CBS series “Airwolf,” died on Feb. 10 after suffering cardiac arrest, according to a death certificate obtained by several outlets. His death, first reported by TMZ, has only now come to light. He was 73.

His image as a baby-faced blonde heartthrob was at odds with his history of violence and substance abuse. The troubled 1970s TV star had a long string of arrests and charges relating to domestic violence, drug possession, and alcohol abuse.

Vincent’s acting career began in 1967, when he was spotted by a talent scout just after finishing a stint in the California Army National Guard. His first film was the Robert Conrad movie “The Bandits.”

Born in Denver, he was signed to Universal Studios in the late ’60s by casting agent Dick Clayton, and in 1969, he appeared in the John Wayne and Rock Hudson Civil War pic “The Undefeated.”

Vincent’s film career took off in the 1970s, during which time he appeared opposite Robert Mitchum in “Going Home” (1971), played Charles Bronson’s hit-man protege in the iconic Michael Winner film “The Mechanic” (1972), and starred in the Gene Hackman Western “Bite the Bullet” (1975) about a marathon, 700-mile horse race.

In 1984, Vincent was cast as the daring pilot Stringfellow “String” Hawke, who flew the titular “Airwolf” helicopter and led its crew on daring espionage missions.

During his three-season stint on “Airwolf,” Vincent became one of the highest-paid actors in American television, earning a reported $200,000 per episode. Vincent started seeking help for drug and alcohol problems while he was still on the show.

In 2000, Vincent was forced to pay over $350,000 as part of a default judgment made against him, after he physically assaulted a former girlfriend, causing her to miscarry their child. He was sentenced to 60 days in prison that same year for violating his probation for prior alcohol-related arrests by appearing drunk in public and assaulting his fiancée.

After “Airwolf,” he was only able to secure small parts through the 1990s, including in “Nash Bridges” and Vincent Gallo’s “Buffalo ’66.” His last credit came in 2002, and in 2012 he had his lower leg amputated after an illness.

He was married at least twice and had a daughter with his first wife.

Correction: An earlier version of this article erroneously reported Vincent’s age as 74.