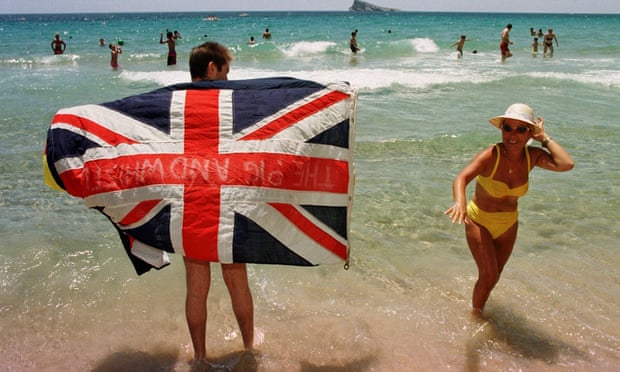 When my primary school friend Mark turned up at my door that summer with the gift of a model Spanish bull, I was conflicted. I would have preferred a sombrero of course, but otherwise, I was in awe. He had just come back from a package holiday in Spain. The sea, he reported, was warm! He had been on a plane! Twice! He’d eaten something called Pie Ella!

This was absurdly adventurous for a Black Country family in the early 1970s. I think it was the same year our family went to Minehead Butlin’s and I declared to my stunned parents I was prepared no longer to participate in the knobbly knees contest.

Mark’s family were outliers, the avant garde of a new kind of tourism, one that didn’t involve being waist deep in the mud at Weston-super-Mare’s alleged beach as one squinted in vain to glimpse the sea. What successive waves of hitherto vitamin D-deprived Britons demanded was what seemed at the time impossible: sun, as well as bacon and eggs for breakfast. Sangria and ouzo by the gallon, yes, but on no account anything with garlic. This was the era in which British attitudes to abroad were expressed in sitcoms such as the spin-off from On the Buses called Don’t Drink the Water or the Are You Being Served film set on the Costa Plonka. Abroad was where us masses went with misgivings and knotted handkerchiefs.

Thanks to package tours such as those offered by Thomas Cook, this seeming impossibility was realised. Sigmund Freud had contended that civilisation involves an endless trade-off between freedom and security. Fool! The package holiday showed we could have both at the same time – the freedom to enjoy the sun, and the security that Johnny Foreigner would not intrude too much during our stay, pestering us with his culture and language.

But notwithstanding the cultural insularity and neocolonial vibe that underpinned the evolving British package tourist industry, those were convivial times, often predicated on shared experiences and communal knees-ups.

What we enjoyed was meeting strange new people from exotic-sounding locations – not so much those from Extremadura, Baden-Baden or Digne-les-Bains, as those from Auchtermuchty, Enniskillen, Betws-y-Coed, or that clearly made-up town called Royal Leamington Spa. British holidaymakers were thrown together on package holidays in ways that hitherto only soldiers had experienced on foreign campaigns, and thus a comradely solidarity was born. Together we faced down new foreign challenges – even if those were just waiters asking us in Greek if we were ready to order yet. I’m exaggerating how much of a world apart, how much of a bubble the package holiday offered in its pomp, but not much.

Now though the package holiday is in its death throes. The 177-year-old travel company Thomas Cook has just had one of the worst summers in living memory, performing so badly that at one point this week its shares slumped by nearly 33%. Other package holiday firms have had to discount their packages heavily in the late-booking market because of a slump in holiday demand.

So what went wrong? The prolonged heatwave across Europe this summer that made us choose sunning ourselves in back gardens over two weeks in Anatolia is one factor. More profoundly, the package holiday can no longer give us what we want. A survey a couple of years ago found that only 15% of Brits go on all-inclusive package holidays nowadays, because they prefer to organise their own adventures.

In package tourism’s heyday, conspicuous consumption meant turning up for the new term red and flaky from the Mediterranean sun. Today? Conspicuous consumption involves updating your Instagram with pix of the cheese that hitherto only the locals knew about or the threatened species you saw on the Galapagos that – sad face – became extinct shortly after you photographed it. The lie-dream of exclusivity, of ostensibly individualist hedonism, of social media showing off, has replaced the communal conviviality of the package holiday.

Long, boring school holidays were the making of me | Nikesh Shukla

In the era of what the sociologist Zygmunt Bauman called liquid modernity, we want to loosen the bonds of family, class, religion, marriage, nationality. Nevertheless, as one form of package holiday dies, another one is being born. Scottish indie band Belle and Sebastian are offering a four-day cruise around the Med next August, like a floating mini-Glastonbury with plusher toilets. If you yearn for a singalong to the band’s Stars of Track and Field (all together now: “You liberated / A boy I never rated / And now he’s throwing discus / For Liverpool and Widnes”), there may still be time to sign up.

But what you will find is a ship teeming with like-minded fey-music-fetishising introverts, which is symptomatic of how the post-modern world seals us up further in our own demographics. At best, the original package holidays did something more revolutionary and offered something that is becoming obsolete – the chance to serendipitously encounter strangers, if only those from our own strange land.