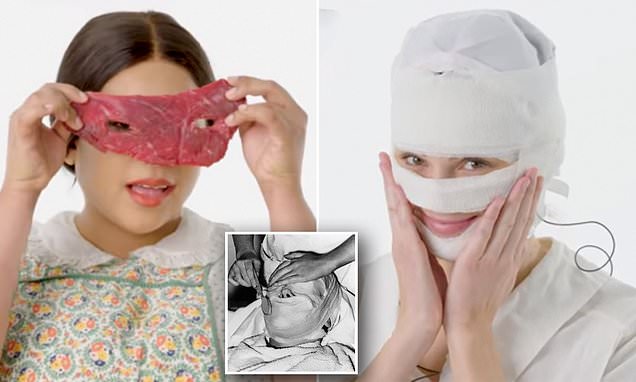 Would YOU smear your face in butter to get better skin? Fascinating video reveals the very BIZARRE face mask formulas used over the last 100 years, from strips of steak to papier mache

The face mask industry has boomed in recent years with people seeking a variety of products to target wrinkles, provide a boost of hydration, and help with hyperpigmentation.

A recent report by Persistence Market Research found the face mask industry has been so lucrative that it is expected to grow to an astounding $10.5 million in sales annually in the United States by the year 2026.

In a video created by Allure, the publication broke down the evolution of face masks in the last 100 years and how it brought the industry to where it is today. 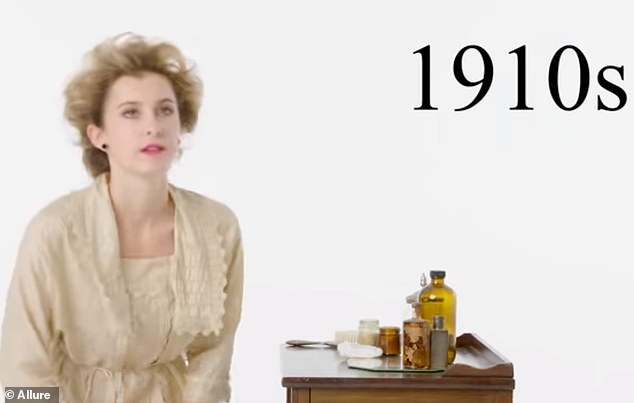 The beginning: Allure broke down the evolution of face masks since the early 1900s, which first saw the product created from powder, creams and rose water 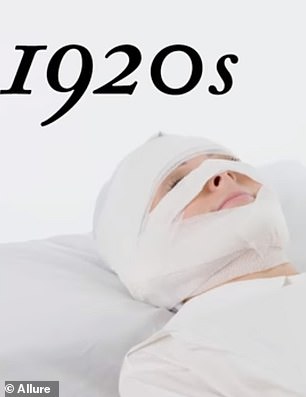 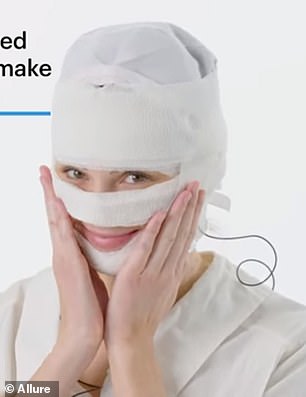 Interesting: The 1920s saw the introduction of the papier-mache mask, which was supposed to help rejuvenate the cells in the skin 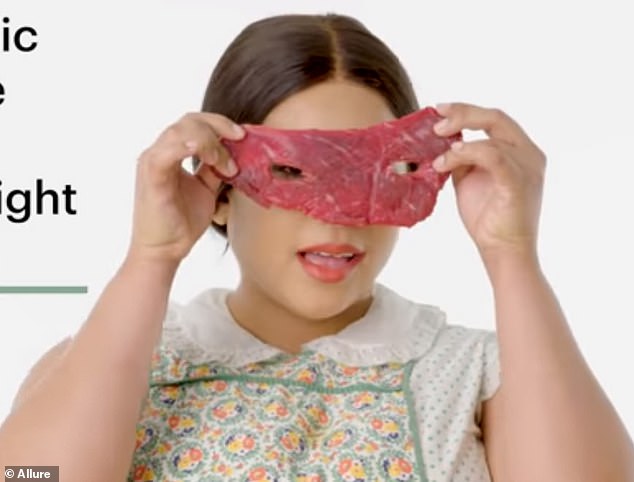 Strange: The 1930s saw the introduction of a DIY red meat face mask, which was meant to help with swelling and puffiness if worn overnight

The video starts in the early 1900s were it explains how the use of cold cream, powder or rose water for face masks is common for women of the decade. The leave-on masks reportedly were to help with sunburns and freckles. 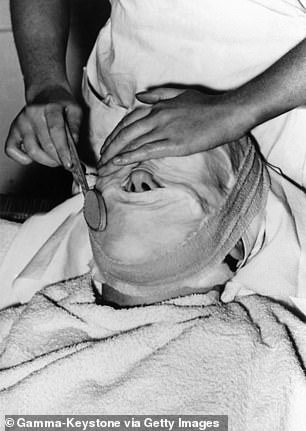 Throwback: It was popular to slather the face with ointments and then wrap it (as pictured) during the 1930s to the 1950s

Rose water has made a comeback in the recent decade, but it was originally toted as essential in the early 1900s.

In the 1920s, a papier-mache mask created by Elizabeth Arden became popular where people would wrap themselves in the item to completely cover the skin area.

To make the mask even more bizarre, there was tin foil lining on the inside of the mask for electricity to run through. It was believed to help brighten the appearance of the skin and rejuvenate the cells.

Ingredients found in the kitchen became popular in the 1930s where women would place egg whites, oatmeal, butter and milk on their face in a DIY paste.

But most bizarrely, thin slices of red meat were advised to be cut into a mask and placed over the eye area overnight. This was said to help reducing puffiness and swelling, similar to someone using meat to help with a black eye. 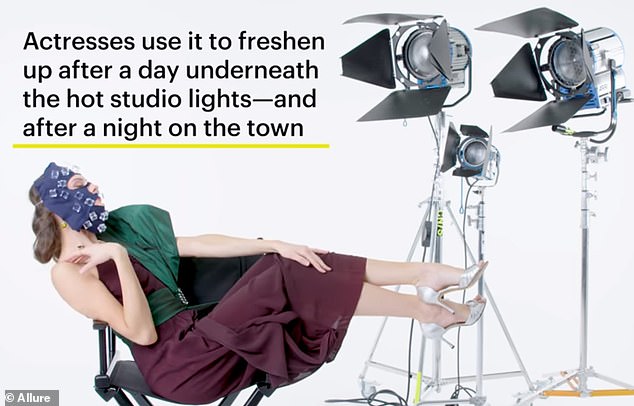 Glamorous: Actresses in the 1940s enjoyed using a frozen mask outfitted with water-filled plastic cubes to help after a day of filming under hot lights 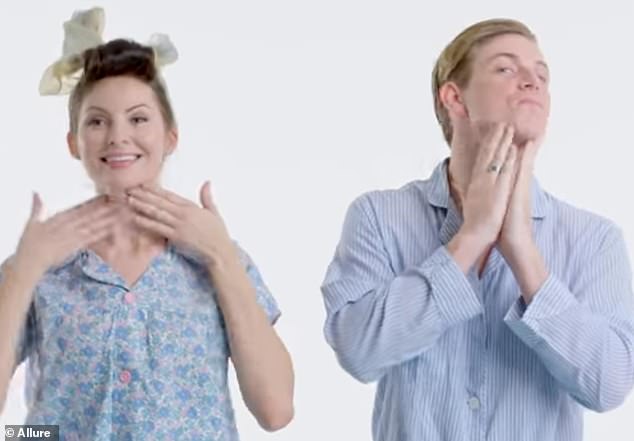 Priorities: The 1950s saw the introduction of face masks for men from multiple beauty companies 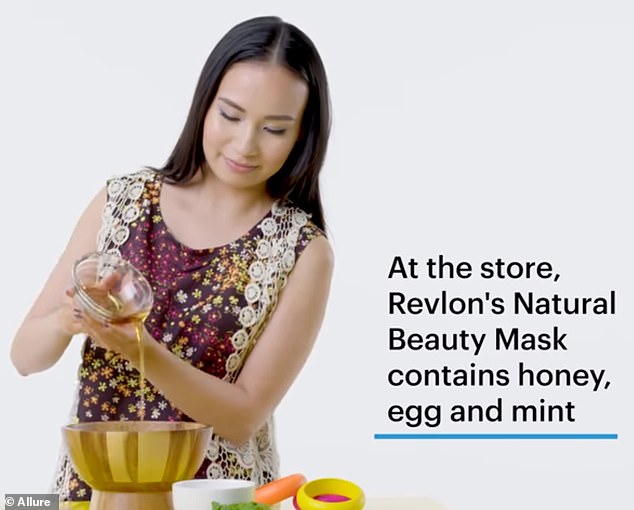 Revealed: It became popular in the 1970s to use natural ingredients, such as honey and eggs

Later in the video, it was revealed that actresses in the 1940s used a mask entitled Hangover Heaven to help cool the face in between takes.

The frozen mask was adorned with water-filled cubes and then placed directly on the skin.

In the 1950s, beauty companies finally turned focus towards men and created face masks they could also use to improve their own complexions. Marketing was previously focused only towards women.

Chicken embryos also first became popular in France during this decade before moving to the US as a way to improve laugh lines and wrinkles, Allure reports. 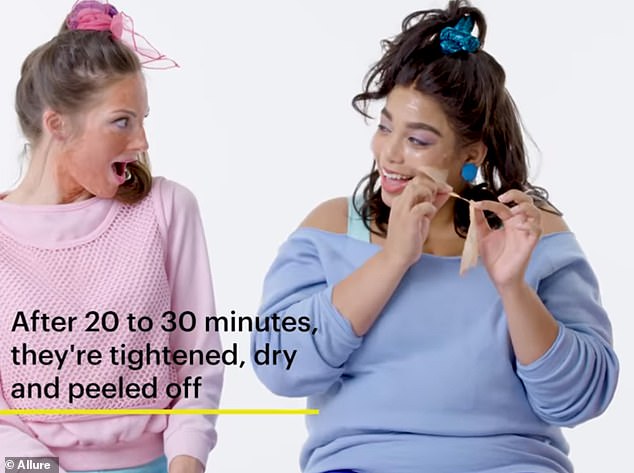 Interesting: The 1980s saw the introduction of the peel-off mask to remove debris from pores 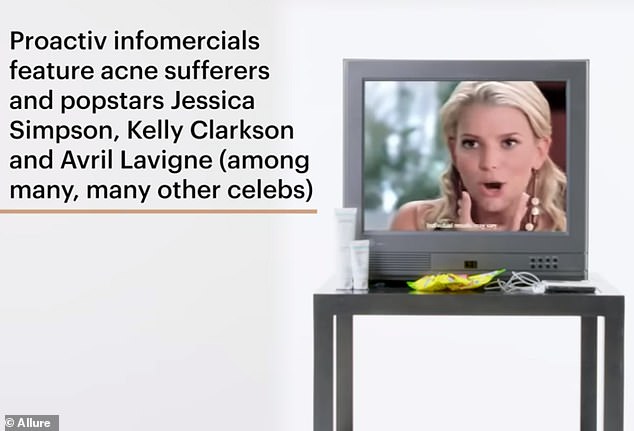 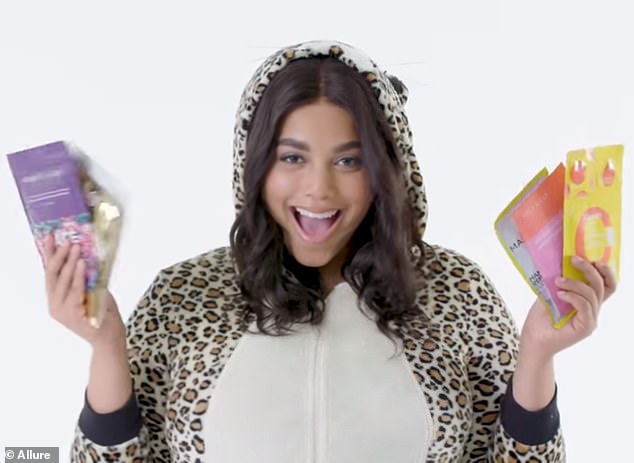 One for everyone! The face mask industry is more lucrative than ever these days with the release of a plethora of sheet masks

What the publication noticed was that ingredients that are currently making a comeback for skin care today — such as avocados and honey — were also used in skin care in the 1970s by hippies who wanted a natural option for their routine. 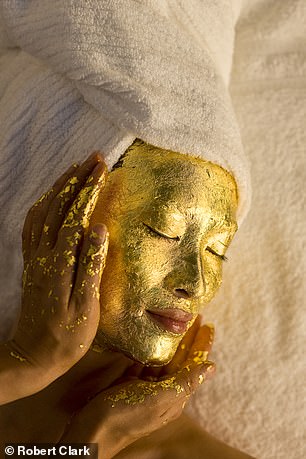 Fancy: Beauty companies work constantly to come up with innovative face mask ideas to draw in customers, such as this gold mask

The popularity of face masks continued to grow into the 1980s where multiple brands came out with peel-off masks to clean out pores and target skin texture.

Acids — such as glycolic and lactic — were allowed in products starting in the 1990s with promises to help smooth skin and improve overall texture. This decade also saw the introduction of the gel mask over the eyes, which is still popular today.

Then Allure revealed that the early 2000s was when Proactive rose into popularity with the help of celebrities endorsing the acne solution. The brand’s acne mask was a huge selling point because it promised to clear any unwanted blemishes.

This decade also saw the introduction of sheet masks, which would continue to grow into popularity until today.

Finally, the 2010s have brought a plethora of options for anyone’s skin care needs with the technology growing to include light therapy, magnetic, and sheet masks.

The industry has also seen ingredients coming back into style with the rise of manuka honey, avocado and rose water in products.

But here’s to hoping the meat mask never comes back in style. 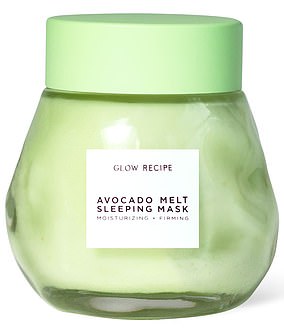 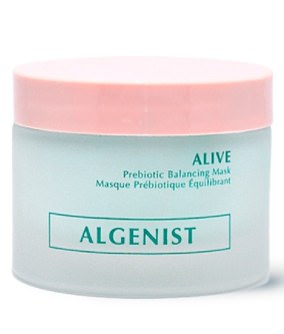 Soothe and refresh: Glow Recipe’s Avocado Melt Sleeping Mask (left, $45) is perhaps the closest you will come to the face mask formulas of old thanks to its foodie ingredients like avocado and honey. The mask works on all skin types to boost hydration and provide your complexion with a much-needed pick-me-up. Then there’s the Algenist Alive Prebiotic Balancing Mask (right, $38), which targets issues resulting from ‘unbalanced surface skin bacteria’. In other words, it helps to rid your complexion of any unwanted bacteria, while bringing back some much-needed balance and calm to your face. 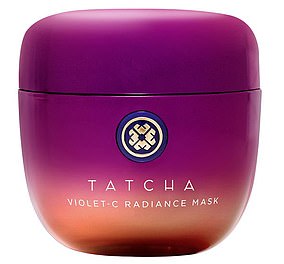 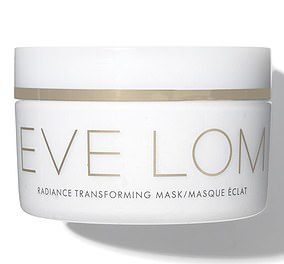 Boost and brighten: Honestly, don’t we all want our faces to look radiant? Well that’s where these masks come in. Both the Tatcha Violet-C Radiance Mask (left, $68) and the Eve Lom Radiance Transforming Mask (right, $90) are at the pricier end of the scale, but they really are worth that extra few dollars you have to spend to get hold of them. The Eve Lom option relies on antioxidant rich botanical oil and plant-derived amino acid in order to plump up the skin, helping it to look youthful and fresh, while the Tatcha formula contains Japanese beautyberry, two types of vitamin C, and AHAs from seven fruits to leave the skin looking smooth and bright. 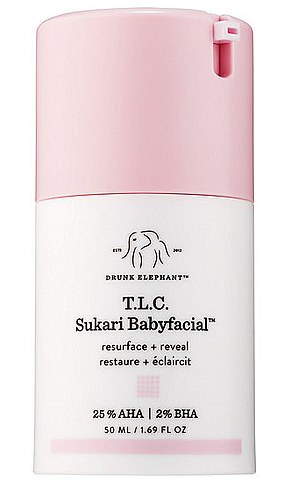 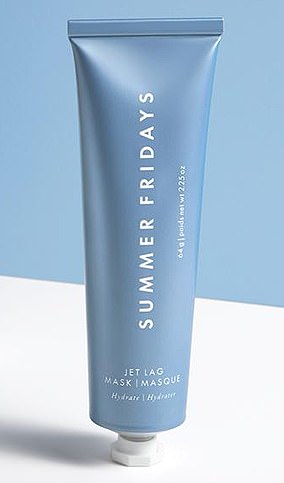 Resurface and restore: The Drunk Elephant TLC Sukari Babyfacial (left, $80) might be one of the weirdest names on this list, but the mask is also one of the most wonderful. Just one weekly use of this mask will leave your skin feeling smoother and softer within no time – and if you follow it up with the moisture-boosting Summer Fridays Jet Lag Mask (right, $48), your face will look and feel like new.