There’s such a huge emphasis on having sex last as long as possible. Like, light some candles, play some music and ease yourself into a sweet, sexy mood. Sometimes, though, you’re pressed for time. Just because time isn’t on your side doesn’t mean you shouldn’t make sex happen. A quickie may not be a leisurely romance-athon, but a quick bout of wham-bam-thank-you-ma’am sex can be super-hot (and super-doable!) — in a totally different way.

“Ten minutes is longer than most sex sessions run when you consider penile-vaginal intercourse specifically,” Dr. Jess O’Reilly, a sexologist, tells SheKnows. “Multiple studies suggest that intercourse only last a few minutes. Some research suggests that it lasts about seven minutes on average and other research suggests that approximately half of all intercourse experiences last two minutes.” What O’Reilly hears from clients around the world (anecdotally) is that intercourse lasts three to four minutes and most of these people report being satisfied with their sex lives.

If you want to have intercourse (and you’re on the clock), consider these quickie positions. 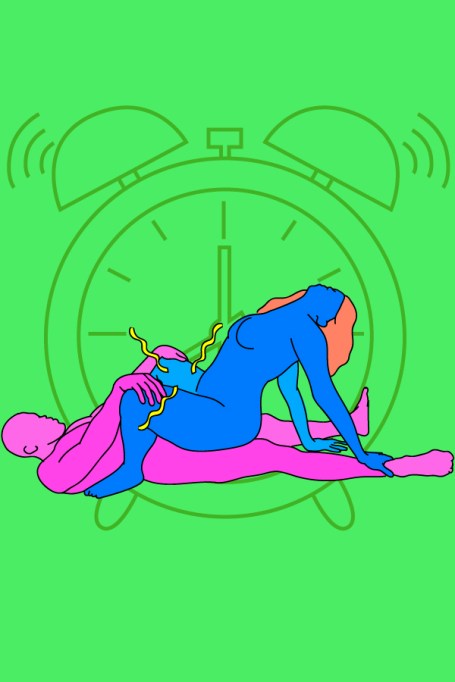 “In a heterosexual context, the traditional ‘woman on top’ or cowgirl position coupled with a clit-centric vibrating cock ring can do the trick,” Dr. Jill McDevitt, a sexologist, tells SheKnows. “Lots of men love when a partner rides them, and the direct clitoral vibes during intercourse can help things move quickly if you only have 10 minutes.” 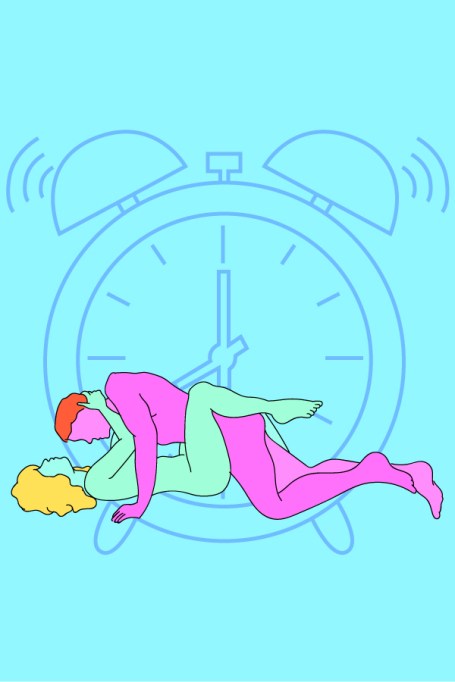 “The CAT — coital alignment technique — is a clitoral favorite, as it allows you to simultaneously squeeze the shaft of the penis or strap-on between your thighs, grind your clitoris against their pelvis bone and enjoy penetration,” O’Reilly tells SheKnows. 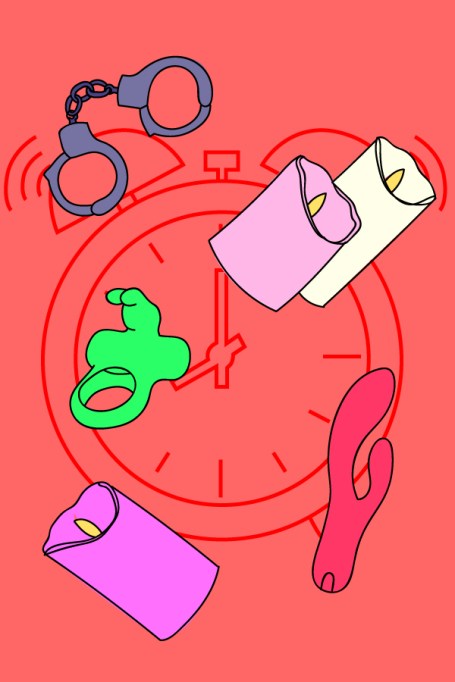 If you want to shake things up, try a new position or sex toy neither of you is familiar with.

“There are few feelings so satisfying as nuanced sex,” Danielle Fima, cofounder of Velvet Co., tells SheKnows. “If you only have time for a quickie, it’s best to bang like you never have before.” Fima warns this will take some preparation, though. “Talk with your partner about positions you’ve wanted to try or secure a new sex toy you both consent to try together,” she says. “That way, you can make the most of the time you have. Building up the anticipation and the novel feeling could have you reaching orgasm in record time.” 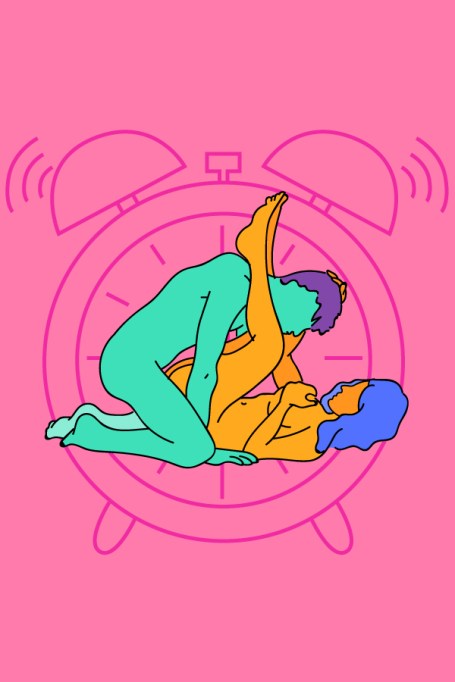 In this position, one partner (typically the vagina-haver) lies on their back and loops their legs over their kneeling lover’s shoulders. “The angle this position creates leads to some pretty deep penetration, Fima says. “It’s also somewhat difficult to hold, making the sex in this position often short and intense.” 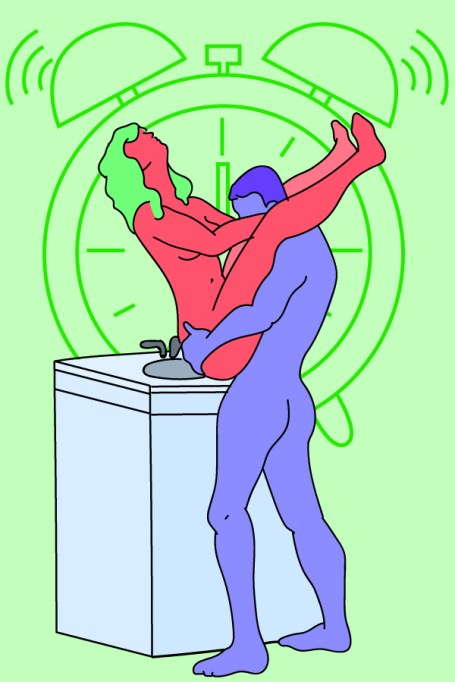 For this position, one partner sits on the sink or counter, and the other stands between their legs.

“The seated partner lifts their legs, so their ankles rest on their partner’s shoulders — or on their sides if flexibility is more limited,” O’Reilly explains. “The standing partner thrusts while the seated partner grinds, rocks and uses their legs to guide the rhythm.” 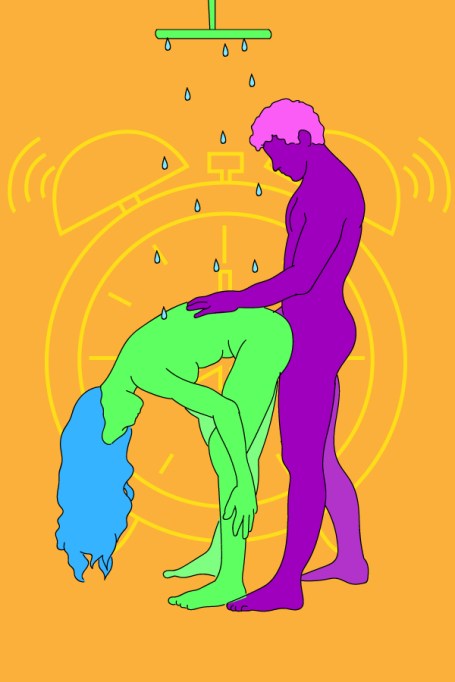 This is the ultimate multitasking position that saves time. Get clean and get off — all in one fell swoop. When it comes to shower sex, O’Reilly says standing while your partner enters from the rear is the most practical execution of this position for most couples. “You can use the wall for support to ensure you don’t slip in the tub,” she says. 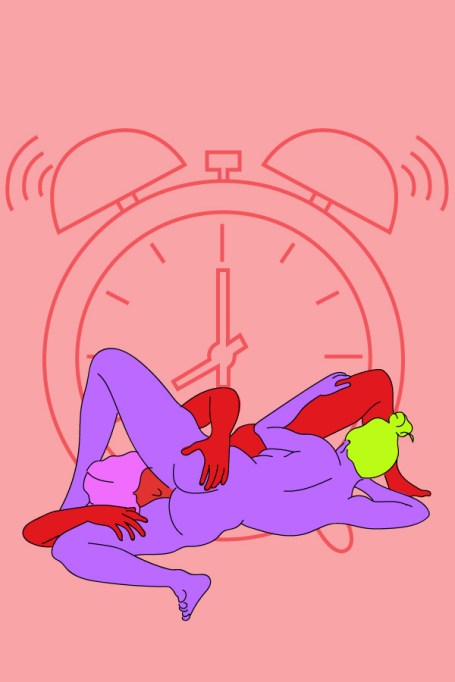 This tried-and-true position is an oldie but goodie for a reason.

“It allows for dual simultaneous stimulation directly on the orgasm centers, which helps ensure both partners are getting what they need,” says McDevitt. “There’s a variety of ways this position can work — side-by-side, one person on top and even a few configurations of one person standing and one person sitting on a bed, chair, etc. — so that you can make do with the space you have for the quickie.” 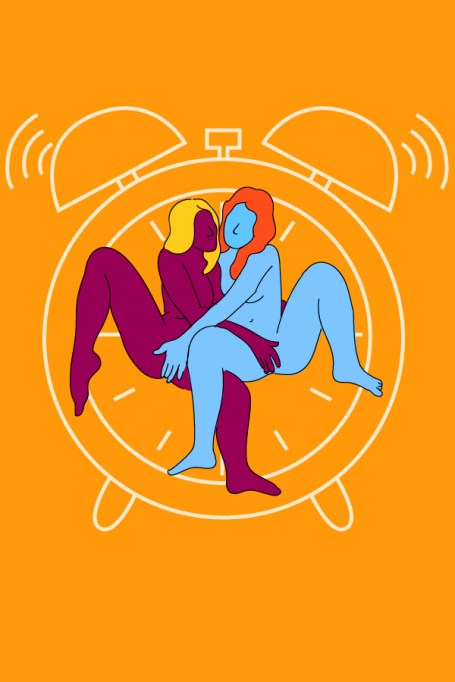 “Fully naked thrusting intercourse isn’t always feasible in 10 minutes, plus there’s time for cleanup and re-dressing to consider,” McDevitt notes. “This position allows for you to remain fully clothed, just getting your hands in each other’s pants, so you’re quick to zip back up after.”