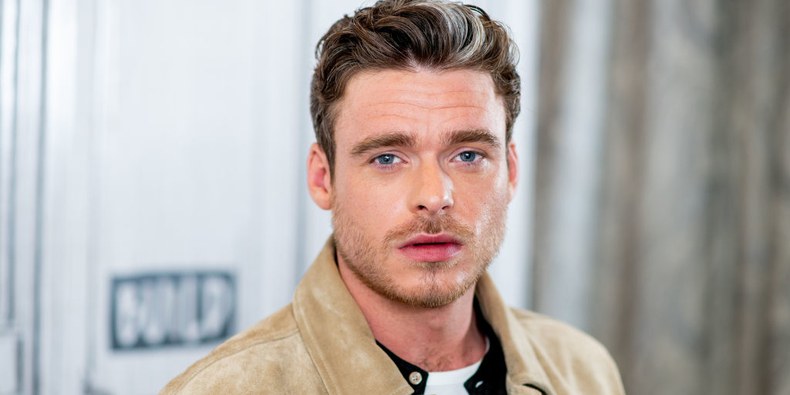 Richard Madden is making waves on this side of the pond, especially now that his BBC One series Bodyguard has landed on Netflix. The actor has been around for quite some time, playing an affable Scottish DJ in Ibiza, Prince Charming in Cinderella, a royal heir to the throne in Game of Thrones, and even the infamous Cosimo de' Medici in Medici: Masters of Florence but there is one role he has yet to take on: James Bond.

The James Bond franchise may be a little bit of a mess right now—Daniel Craig is still signed on to play 007 for now, but he can’t keep playing the role forever, and after Danny Boyle exited the film as director, Cary Fukunaga hopped on in his place. If there is one person who can save James Bond for the better, it’s Richard Madden.

His role as Robb Stark on Game of Thrones prepared him for any physically strenuous fight scenes, and his starring turn on Bodyguard, a thrilling exploration of a war veteran who must protect a politician whose beliefs do not align with his own (think of it as reverse Homeland), has already put Madden at the front of the running to take the coveted lead in the next James Bond film. Here, five reasons why Madden—even if he doesn't end up taking over 007 from Daniel Craig—should be the next big star.

In the Netflix's Ibiza, Madden plays a Scottish DJ who falls in love with an American (played by Gillian Jacobs) at a Spanish club. If anything, Madden’s performance in this movie proves that he has what it takes to be a romantic lead (and not just in the looks department, which, yes that checks out, too). He also literally played Prince Charming in Cinderella, opposite Lily James. James Bond is an international spy, yes, but he is also a charming playboy.

He's the George Clooney of GoT.

Recently, the actor launched a Game of Thrones reunion when he posed for a photo with his screen sister, in support of Maisie Williams’s new play at London’s Hampstead Theatre. Williams is not the only star to be featured on Madden’s Instagram over the years—Kit Harington has also made the cut, and The Crown’s Matt Smith even once gave Madden a peck on the cheek for the gram. He seems to be the Danny Ocean to his castmates.

He actually seems to have good taste in music.

Let's be real: Most actors' musical tastes are suspect, to say nothing of their vanity bands. But Madden must have some unabashed love for the forefathers of post-punk, if his selfie in a Joy Division Unknown Pleasures t-shirt is anything to go by (sure, it's the same one countless teens scored from Hot Topic and Urban Outfitters back in the day, so it's possible he's not a true fan, but let's give him the benefit of the doubt).

He has an admirable selfie game.

The man knows how to take a good selfie. His Instagram feed is full of ones he took throughout production of Bodyguard. If James Bond is going to be updated for the millennial age, there has to be at least one selfie joke peppered into the plot of the next film, for accuracy’s sake.

He has an equally admirable hair game.

Thank you to these beauties for all the threads in NYC last week! Big love to the one and only @stylegazer1 for his impeccable taste. #IbizaMovie @giorgioarmani @okeeffeshoes @frame @reiss @lestrangelondon @londonsockco Love!

The concluding piece of evidence that suggests Madden should play 007 in whichever James Bond movie follows James Bond 25? His little gray swoop of hair. Everybody knows that just a touch of gray could make our smooth talking action star that much more debonair. Case in point: Before Sean Connery became a full-on silver fox, he sported some slightly graying hair as James Bond in Diamonds Are Forever, and everyone loves him for it.