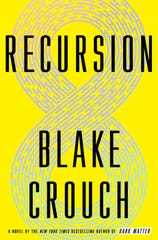 In search of something good to read? USA TODAY’s Barbara VanDenburgh scopes out the shelves for this week’s hottest new book releases.

What it’s about: The author of “Dark Matter” returns with a mind-bending thriller. Neuroscientist Helena Smith and New York City cop Barry Sutton make an unlikely pair, but they’re the world’s only chance of defeating a new scourge known as False Memory Syndrome — a mysterious affliction that drives its victims mad with memories of a life they never lived.

The buzz: “Michael Crichton’s fans won’t want to miss this one,” says Publishers Weekly in a starred review.

What it’s about: Weiner’s ambitious novel charts the course of two sisters’ lives through modern American history. As kids, Jo is the bookish tomboy and Bethie the feminine good girl. But Vietnam, Woodstock, the women’s liberation movement and life in general change the course of their dreams. Can these two very different women still find their happily ever afters?

The buzz: Kirkus Reviews calls it “an ambitious look at how women’s roles have changed — and stayed the same — over the last 70 years.”

What it’s about: Grown-up Abby remains obsessed with her childhood best friend Elise, who has since become a celebrated Hollywood starlet. When they reconnect at their high school reunion, Abby drops everything to move to L.A. and be with Elise and grows ever more insecure and unstable.

The buzz: “Utterly bizarre and completely bewitching, this twisted, delicious tale will grab you from the first page and hurl you over the edge,” says a starred review in Kirkus Reviews.

4. “Someone Who Will Love You in All Your Damaged Glory,” by Raphael Bob-Waksberg (Knopf, fiction, on sale June 11)

What it’s about: “BoJack Horseman” is one of the best series Netflix has ever produced, thanks to the subversive genius of its creator, Bob-Waksberg. Now he’s out with a collection of absurd stories about love, told with the same scathingly dark humor and heart fans of his series will recognize.

The buzz: “These stories are at times poignant and triumphantly silly, but always manage to ring true,” says Publishers Weekly.

The buzz: “Readers looking for an emotional tale will find much to enjoy,” says Publishers Weekly.