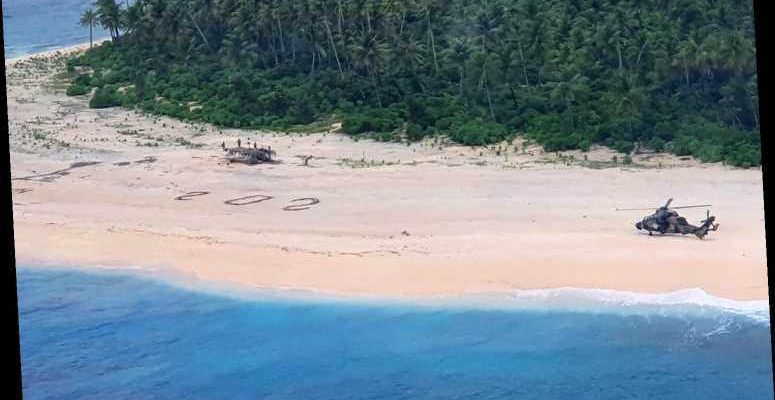 According to authorities, the men first departed from Puluwat Atoll on their 23-foot white and blue skiff boat on July 29.

Though they intended to travel to Pulap, Chuuk, which was approximately 21 nautical miles away, they never made it and were soon reported missing, according to the press release.

Crews searched for three hours, flying at about 1,500 feet above land and sea, before noticing the "SOS" message in the sand.

"From there we called in the Australian Navy because they had two helicopters nearby that could assist and land on the island," Palmeira-Yen recalled.

Over the next few days, the mariners patiently waited on the island as officials organized the rescue mission, confirmed the men's identities, ensured they had no major injuries, and limited their exposure or contact due to the coronavirus, CNN reported.

In the meantime, the men were delivered supplies by a helicopter crew from the Royal Australian Navy ship HMAS Canberra and given radio and message blocks notifying them that the FSS Independence was en-route to return them home, according to the Andersen Air Force Base in Guam.

Finally, at 12 a.m. local time on Aug. 3, the FSS Independence and its small boat crew arrived on the remote island to rescue the mariners, officials said.

"Partnerships," U.S. Coast Guard Capt. Christopher Chase, Coast Guard Sector Guam, commander, said in a statement. "This is what made this search and rescue case successful. Through coordination with multiple response organizations, we were able to save three members of our community and bring them back home to their families."

In his own statement, Capt. Terry Morrison, the commander of the Canberra, also praised his crew for their efforts and saving the mariners' lives.

"I am proud of the response and professionalism of all on board as we fulfill our obligation to contribute to the safety of life at sea wherever we are in the world," he said, according to CNN.