Let’s face it: We’ve become depressingly rote in our response to police violence against the Black community. We say how outraged we are on Instagram. We share a link on Facebook and declare that #BlackLivesMatter in the status. Wash, rinse, repeat.

There’s not much value in deriding “slacktivists” or debating what true allyship means. There’s no denying that posting is important. Bringing awareness to issues your friends and families may be closed off to and sharing antiracist organizations to donate to is very necessary.

But if we’re going to share the burden of this fight and change the status quo, we can’t stop there.

Below, Black community activists and their allies share how to turn your empathy into action in the wake of police brutality.

Don’t think you need to be the perfect ally to speak up.

Oftentimes, the desire to be a “perfect” ally stops people from speaking up and taking action. Sometimes, we say nothing at all, not wanting to rock the boat or be judged as “too political” on social media. This silence is part of white supremacy culture. (For what it’s worth, speaking up against human rights violations is about as low-risk as you can get if you’re worried about appearing “political.”)

Don’t let concerns like this prevent you from showing up. Now more than ever is the time to take action to support Black, Indigenous and other people of color ― even if you’ve been slow to get involved in the past.

“There’s no such thing as a perfect ally,” said Fizz Perkal, an organizer with the Albuquerque chapter of Showing Up For Justice. “When it comes to challenging police violence … the goal is to listen to Black folks, follow their lead, and be accountable for how our behavior impacts them.”

Start by observing what Black organizations are doing, and take your cues from them.

“Be accountable to them and know how to best support their organizing,” Perkal said. (The group Perkal is involved with, Showing Up For Justice, is a perfect example of that: They’re a nonprofit that works to bring more white communities and people into multiracial, antiracist movements for justice.)

“Supporting them may mean showing up at the Black Lives Matter protest or it may be staying on the edges to put a physical barrier in between Black protesters and the police,” Perkal said. 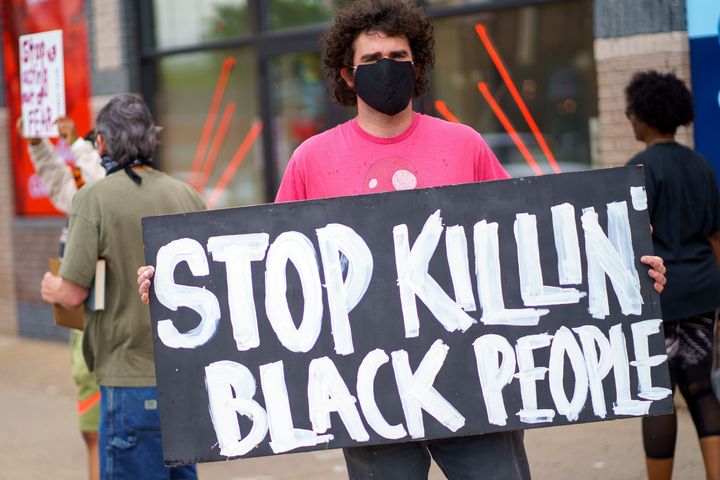 If you see an act of police brutality happening, speak up and safely make your presence known.

“People have to step off the sideline if they see an injustice,” said activist and writer Frederick Joseph. “For example, if someone is being stopped by the police, you have the right to let the police know that you are going to be monitoring the situation and making sure that the person is being treated fairly and safely.”

“You staying there and holding the police accountable may be the difference between life and death,” he added.

Educate yourself without placing the burden on Black people to be your teachers.

As with any civil rights movement, don’t expect the oppressed party to do all the work in educating you on why the system is broken and what you can do to change it.

Google is your friend. Give your Black friend a break. Instead of saying, “OK, well, what should we do then?” when they tell you how disheartened they feel after another incident, search for the answers on your own. Read the books, listen to the podcasts and TED talks, follow activists on Twitter. When Black creators have put out so many resources already, there’s no need to put the onus on the Black people in your life to educate you.

“I think it’s unfair to expect African Americans to be the teacher and give allies the homework,” Harts said. “If certain groups want to learn, start learning. And once we see some foundational steps have been taken, personally, I love to engage. But I can’t do all the work; meet us in the middle. If you want to learn how to be an antiracist, start with the resources available to you.”

If you’re white or benefit from white privilege, check out this list of anti-racism resources for white people that’s been floating around social media.

Engage with racist people you know. And engage with your silent non-Black friends, too.

It’s not enough to “mute” your uncle on Facebook when he posts something racist. Call him out. And while you’re at it, call out your progressive friends who love Black culture but remain strangely quiet when crimes are committed against Black people.

Ask them why. Remind them of our shared humanity. Challenge them to untangle racist narratives. Tag them into this fight. For starters, you might show them this video featuring anti-racist educator Jane Elliott. In the clip, Elliott asks an audience of mostly white people a very, very simple question: Would you want to be treated like a Black person in America? (No one in the room stands when asked.)

“That says very plainly that you know what’s happening,” Elliott says. “You know you don’t want it for you. I want to know why you are so willing to accept it or to allow it to happen for others.”

Call the district attorney’s office and other local government officials. Then show up at town hall and city council meetings.

There are things you can do in the immediate aftermath of police brutality, like signing petitions or calling or texting to put pressure on local district attorneys to bring justice to officers involved in police violence.

Once the news cycle dies down, though, don’t stop. Write op-eds. Share links. Take your discontent and concerns to city council meetings and town halls when a story isn’t in the news, said Minda Harts, author of “The Memo: What Women of Color Need To Know To Secure A Seat At The Table.”

“Then you can show up at the police precinct and let the chief of police know you are outraged by the treatment of Black people,” Harts said. “I would love to see allyship shifted into action. I can no longer take performative allyship; lean into your courage and push aside your caution, because no one benefits when allies are cautious.”

Nervous about speaking out on your own? Get involved with groups like Showing Up for Racial Justice. 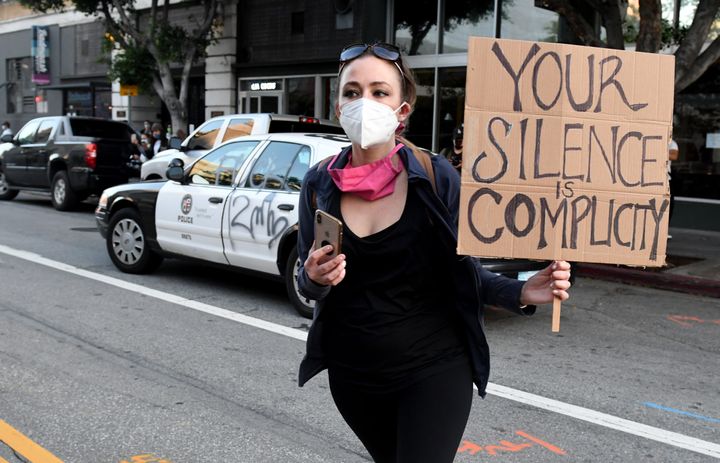 Pay close attention to how your local police department functions.

If corruption and police violence are rampant in your community, speak up when you see a bloated budget for the police department that could be redistributed toward programs that build stronger, safer, healthier communities.

As The Appeal has reported, this type of disinvest-reinvest approach is gaining ground in cities across the U.S. among youth and grassroots organizers. Los Angeles-based Youth Justice Coalition created the “LA for Youth” campaign in 2012 to demand that city officials redirect $100 million (about 1% of the law enforcement budget) to youth programs.

Vote with your conscience, too. If your DA is doing nothing, vote them out of office.

“White people should also vote for elected officials who commit to this vision that values people over policing,” said Charlene A. Carruthers, a writer and organizer. “Discomfort, unlearning, giving of your time and money are critical for all white people who want to show up.”

Take the fight to your workplace.

Another thing you can do when the headlines die down? If you benefit from white privilege, use it to speak up in support of Black people in the workplace. If you see qualified people of color being passed over for higher-status jobs, bring it up with HR or leadership.

“Question authority and hold people and systems accountable to create more equal and equitable work environments,” Joseph said. “For example, asking leadership at your job why there aren’t more Black people, or why they aren’t in leadership roles.”

Offer solutions, too. If there are too few Black people in your workforce, encourage your managers to reach out to prospective candidates at historically Black colleges and universities.

Do more listening than talking. And when your Black friends give you constructive feedback, welcome it.

Again, you’re not going to be the perfect ally. You might misspeak. You might talk over marginalized voices or attempt to tell stories that do not belong to you when you really should be passing the mic. You might stay silent when your support is pivotal. If a Black person gives you critical feedback on anything like this, see it as a positive, not a penalty, Perkal said.

“If someone, especially a Black, Indigenous, or person of color, tells you how you harmed or impacted them, it’s a gift,” Perkal said. “It’s a chance to reflect on how … we carry white supremacy in our bodies and actions, and do better next time. Be accountable for the ways in which you, consciously or not, bring white supremacy into organizing spaces. Build your resilience so you can get the most out of critical feedback.”

Don’t think you’re off the hook because you’re also a minority.

The fact that one of the other police officers that stood by as Derek Chauvin pressed his knee down on George Floyd’s neck was Asian has sparked a heated debate in the Asian American community.

The questions being posed on Twitter and elsewhere are relevant to all minority communities: Do you speak up when someone in your community expresses anti-Black sentiment? Do you compete in the “oppression Olympics”? (Yes, the bigotry many minority groups face is unacceptable, but no group in America faces the same multifaceted discrimination as the Black community.) How do you benefit from your proximity to whiteness?

This isn’t just a “dear white people” problem: It’s equally important for Asians, Latinos, Native Americans and others to speak up against the outsized racism Black Americans experience, said E.J.R. David, a professor of psychology at the University of Alaska Anchorage and the author “Brown Skin, White Minds.” David, who’s Filipino, said reflecting on your own privilege is especially important.

“In our quest to survive, some of us may have been striving to become white-adjacent — as successful as white people, as fitting in and assimilated as white people, as deserving as white people of dignity and respect — and along the journey, consciously or subconsciously, have adopted the language and beliefs of white supremacy and anti-Blackness,” he said.

Donate to anti-white supremacy work, such as your local Black Lives Matter chapter.

Put your money where your mouth is by donating to antiracist groups like the NAACP, Southern Poverty Law Center, Color of Change, The Sentencing Project the National Council for Incarcerated and Formerly Incarcerated Women and Girls.

Check your own behaviors of policing Black people in your daily life.

Recognize your own implicit biases. As “Top Chef’s” Padma Lakshmi said, “Racism is a spectrum, with varying degrees of unconscious and learned behaviors reinforced by society every day. It’s not: either you’re racist or you’re not. It’s to what degree are you prejudiced, against whom, and why?”

If being antiracist is an ongoing project, your first assignment is to interrogate your own behaviors and belief system. Every one of us needs to reflect on how we may be policing Black people in our daily lives, said Michelle Kim, the CEO at Awaken, a company that offers diversity and inclusion workshops in the workplace. (Kim also wrote a really great Medium piece on ways Asian Americans can step up for their Black peers.)

“Studies have shown Black people are over-scrutinized in the workplace, over-surveilled in stores, punished disproportionately harshly and frequently in schools, and not believed when they bring up harm they experience (as opposed to white women being believed for false accusations),” she added.

“Before we make any progress, we need to recognize that we are complicit in the policing of Black people in our society,” she said. “We need to check our own behaviors first.”