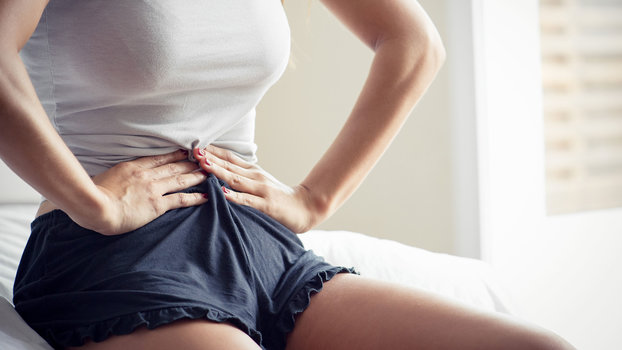 There are some issues that, despite your best efforts, have a way of making their way into your life to disrupt it. Whether it’s a pulled muscle from training for a marathon or a crater-sized pimple that appears after using a new scrub, day to day life is not without nagging discomforts.

Also on that list? Bloating. Whether you feel the puffy, cramped feeling coming on after a big dinner, before your period, or after sipping on an artificially sweetened drink (all common causes of bloating), you can bet you aren’t the only one who’s bloated — or hating how it makes you feel.

Here are a few reasons you’re bloated and some expert solutions for how to make it stop.

You’re Getting Your Period

It seems simple enough, but it’s not uncommon to underestimate PMS symptoms, leading you to think your bloating is related to something else.

“Most women experience mild bloating a week or two before a period that is caused by normal cyclic hormonal changes,” says Sherry Ross, M.D., an OB-GYN and author of She-ology: The Definitive Guide to Women’s Intimate Health. Period. “Severe bloating along with other symptoms such as depression, crying spells, irritability, food cravings and weight gain are associated with premenstrual syndrome.”

The good news? Your bloating should hit the road along with your flow. But, in the meantime, you might want to try a heating pad for relief from period-related bloating. In a 2001 study published in Evidence-Based Nursing, researchers found topically applied heat was equally as effective as ibuprofen for providing relief from period cramps. And it’s the heat that will bring your belly back down to size.

VIDEO: 11 Reasons Why Your Eyes Are Puffy

You Had A Decadent Dinner

Ross says a meal packed with rich and fatty foods might also be the culprit behind your bloating. Fat takes longer to digest than protein and carbohydrates, which means red meat, creamy dishes, fried foods and that greasy cheeseburger you were craving will all take longer to make their exit, leaving you feeling fuller than usual. Your best course of action here is to let the food work its way through.

You Used An Artificial Sweetener

If you like to opt for artificial sweeteners in place of straight-up sugar, Ross says that could be the reason behind your bloated belly. That includes sorbitol, mannitol, xylitol, maltitol and lactitol, all of which Ross says “are directly associated with this frustrating symptom.”

These are used in diet sodas, sugar-free gum, and all kinds of “no sugar” packaged sweets, plus they’re available at your local coffee shop to sprinkle in your drink. Often referred to as “sugar alcohols,” these artificial sweeteners are popular because they’re low in calories, but that’s because they’re so difficult for the gut to absorb, reported U.S. News & World Report.

“If we can’t absorb them, then we can’t access their calories,” the publication noted. “The side effects of malabsorbing such small sugar-like molecules are — surprise, surprise — gas and (sometimes explosive) diarrhea.” If you have this reaction, you will probably want to skip the fake stuff going forward, and drink water to flush it out.

You Went Heavy On The Fiber

Broccoli, cabbage, cauliflower and their fibrous counterparts are all healthy additions to any diet, but they are kind of a catch-22 when it comes to bloating and gas. If you don’t get enough fiber, you’ll be constipated. But if you have too much, well, you’ve heard the song about beans and their link to flatulence, right?

If you’re having an issue with bloating after eating a helping of your favorite fiber-rich veggies or beans, Ross says you can just avoid the foods at your next meal or skip going back for seconds in order get some relief from bloating.

You Ate Too Much Salt

According to the Centers for Disease Control and Prevention (CDC), the average American adult eats more salt than they should, an average of more than 3,400 milligrams each day (2,300 milligrams is recommended). Not only does excess salt consumption put you at risk for serious conditions like high blood pressure and heart disease, but it can also lead to uncomfortable bloating.

If you do have a salty meal, Barbie Boules, R.D.N., founder of Nyoutrition, says it’s important to also drink enough water in order to get rid of excess salt in your system.

“Sodium is essential for regulating water levels in the body, but too much floating around in your blood will cause fluid retention,” she says. “It seems counterintuitive to drink more water, but that’s precisely what you need to do to dilute the sodium and flush the fluid.”

And speaking of water, not drinking enough of it might just be another reason why you’re bloated. While it may seem like tired advice, the truth is, water is kind of a big deal. Not only does water prevent dehydration, but it also helps to keep things moving through your body, eliminating gas and a chance of constipation — both of which can make you feel bloated.

Boules recommends consuming half of your body weight in ounces of water every day, as well as eating hydrating vegetables, like cucumbers and celery.

You Sipped On Something Carbonated

If you like your water to be a bit bubbly, then you could be causing unnecessary bloat, Ross says. And the reason is simple: Carbonated water — like sparkling or seltzer beverages — contains natural gasses that, well, make you bloated and gassy as they move through the digestive tract, according to Byrdie.

You Ate Too Much Or Too Fast

If you’ve ever scarfed down an entire plate in record time or had an eyes-were-bigger-than-your-stomach meal, then chances are likely you’ve experienced this type of bloating. Ross recommends sipping on a cup of warm green tea, which will not only soothe your upset belly, but acts as a natural diuretic, flushing away water and excess sodium.

Once your food digests a bit, you can also try exercise to help ease discomfort. An after-dinner walk or light yoga will “help get the juices flowing,” according to Boules.

You Overdid it on Bread

Boules says that starchy carbohydrates — bread, cereals, pasta — are known for their tendency to cause bloat. The gist of it? These foods are pretty good at retaining water, meaning that when they are in your belly, you do, too.

“This is a normal process, but the more that is stored, the more fluid is retained,” Boules says, explaining that this is why people initially see quick weight loss on low-carb diets.“Initially it’s just water.”

To skip the bloat, Boules said you should opt for whole grains, beans, legumes, veggies and fruits in place of more processed options. When you do have starchy carbs, Boules recommends limiting them — “they offer little nutritional value” — to two servings per day.

You Had A Little Too Much Fun At Happy Hour

Boules says alcohol can cause bloating for several reasons as a result of gastrointestinal upset and actual weight gain. But the primary reason it leads to gas and bloating? Dehydration.

“After too much booze, the body attempts to heal and one of the ways it does this is by holding on to water,” she says.

If you have a couple of drinks, then be sure to counteract the effects by downing water. Ross recommends drinking warm water as a means for relaxing your belly and you might also want to stir in a squeeze of lemon, which is said to aid in digestion, naturally flush the body and provide a healthy dose of vitamin C, according to Wellness Mama.

You Have A Food Intolerance

If you have persistent belly bloat and discomfort, then Boules says you may be dealing with a food intolerance. Lactose, eggs, corn, and gluten are just a few of the foods that can cause bloat as the result of an underlying issue (for example, celiac disease or Crohn’s disease). Boules says if bloating and digestive issues are chronic, then it’s important to talk to your doctor.

And if you do and still can’t pinpoint the issue, then consider trying an elimination diet, which involves nixing common problematic foods to pinpoint whether one of them is the root cause of your discomfort, Boules says, adding that you should talk to a dietitian who can help guide you in this process.