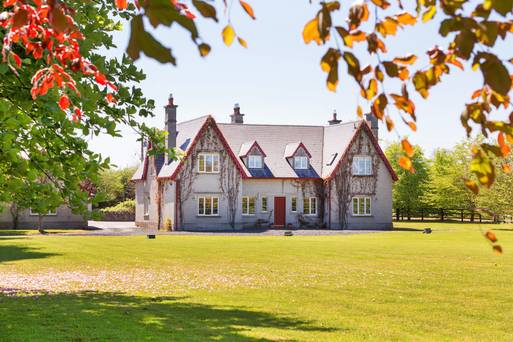 Could you endure living in a garage for three years while the house of your dreams was being built? Well, that is exactly what committed couple Joseph and Pamela Hayes did, along with their five children.

They fulfilled a long-cherished ambition by building their own home on a 1.3-acre site in Clane, Co Kildare.

In the early 1990s, the pair lived in Clane village with their children. When they decided to get moving on their dream home at the new site, Joseph built a two-storey garage with about 850 sq ft of floor space, and fitted it out as temporary accommodation for the family.

They stayed there for three years before moving to the big house in 1996. The clever move meant the couple didn’t have the expense of renting nor, like many, suffer the claustrophobia of living in on-site temporary accommodation like a mobile home or caravan.

As a building contractor by trade, Joseph constructed the house himself, and he made sure to take his time in getting it right.

“You don’t want to take risks when building a house from scratch,” he says. “We started by bringing our ideas to architect Patricia Ennis in Kildare Town. We wanted a family home to be lived in, not just to look good.

“I sketched how we wanted the outside to look. Pamela and I were aiming for a Gothic-style country house, built way back from the road so that it would be really private. She wanted a bathroom that would be her own special retreat, one with a fireplace and a roll-top jacuzzi bath where she could light candles and have an open fire while unwinding after a long day of working as a special-needs children’s nurse and looking after our five children.

“The kids wanted a play/games room. Two of the boys wanted interlinked bedrooms so they could hang out together and still have their own space. Some of the kids wanted ensuite bathrooms.

“We incorporated all of their wishes into the plans, and got planning permission for a seven-bedroom detached house on the site, with a garage and shed.” Before construction began in 1993, Joseph constructed the two-storey garage which he fitted out as temporary accommodation for the family to live in while work got underway. While only a quarter of the size of their home-to-be, there was running water, cooking and cleaning facilities, and the conditions, though tight, were not completely cramped.

They were glad to live on the site, one they knew well, having passed it every day on their way to work from their previous home in Clane village. Located opposite Clane Hospital and only a five minutes’ walk from Scoil Mhuire primary school, it ticked a lot of their boxes. An elevated site with mountain views, it had oodles of space for kids to play and was large enough for a house to be set well back from the road.

“We dreamed about living there,” says Pamela, a Clane native who wanted to stay close to family and friends in the area.

When the site came up for auction, the couple didn’t hesitate. They snapped it up and then began the long, slow process of turning their dream into reality.

“We knew what we were letting ourselves in for,” says Joseph.

“We had to get planning, and the architect helped us with that. Being in the business had its advantages in that I could assemble a good team of tradesmen I could rely on, but I also spoke to people who’d built their own homes, and sought advice from other professionals.” Once he had the garage set up as a temporary home, the family started their three-year wait, but according to Pamela, it wasn’t a hardship.

“It gave us time to save and spread the cost of the building works,” she says. “However, by the time the house was ready to move into in 1996, we all greatly appreciated the space it gave us.”

Approached through electric gates along a tree-lined gravel drive, there’s a distinct country house feel to Hoganswood House, even though it’s in an urban setting.

There’s a massive lawned garden to the front, where once the five Hayes children and their friends kicked ball and jumped on trampolines and bouncy castles.

The back is paved, with a large wooden deck that’s been host to numerous barbecues over the years. Dominated by a feature mahogany staircase with gallery-style landing, the large entrance hall has a practical flagstone floor, perfect for mucky kids’ and builder’s shoes. The modern, integrated kitchen-diner has an Aga cooker, island with sink and storage space, and a dining table big enough for 10.

“This is where the family gathered round for meals, yet everyone had their privacy,” says Pamela. “The house was big enough for that, and the children never took it for granted after living in the garage for three years.”

The garage now serves its original intended purpose, but could easily be converted again to a granny flat or teenage den. There’s also a shed outside, which one of the couple’s sons used as a workshop before becoming a furniture designer. Another son followed his dad into construction, one is an architect in Norway, and one daughter is a town planner. The other daughter followed her mother’s footsteps in working with children, though as a Montessori teacher. They went to college in UCD and Maynooth, both of which are on the main bus route.

Pamela and Joseph left Hoganswood House once before, when they spent two-and-a-half years as emergency volunteers in New Zealand, building houses for people who had lost their homes in an earthquake there in 2011.

“Joseph built them, and I painted them,” recalls Pamela.

Now Hoganswood is too big for the empty nesters, who want to downsize in the area.

“It’s a house that’s been full of love and laughter for almost 20 years, and now it’s time for another family to make it their own,” says Pamela.

Hoganswood House, Firmount West, Clane, Co Kildare (BER: C2) is for sale by public auction with a guide price of €675,000 on Wednesday at 3pm in Glenroyal Hotel, Maynooth, Co Kildare. The selling agency is Coonan Property based in Maynooth (01) 6286128.