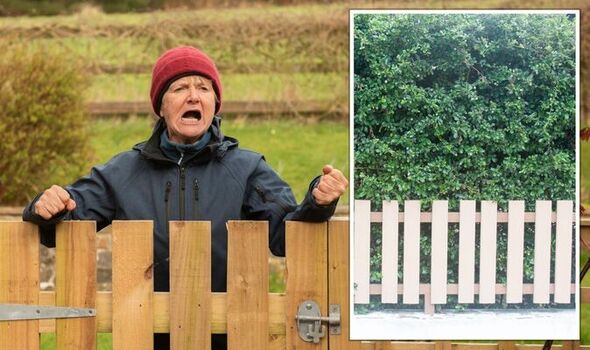 Living next to a nightmare neighbour who can’t see reason is the worst. Not only can difficult neighbours make your life a misery, but their decisions can impact your home. One woman who has been left in a difficult predicament has lashed out at her neighbour for refusing to get a tree stump removed. The homeowner claims the tree’s roots prevent her from planting a hedge in her garden, as she would like to. And the neighbour has refused to cooperate, even though she and her partner offered to foot the bill.

However, not everyone expressed sympathy for the woman when she took to the internet to complain about the elderly neighbour living next door, calling her a “vindictive witch”. The online rant quickly sparked a passionate debate, with many people unable to agree which neighbour was right.

In the woman’s post to Mumsnet, the homeowner explained trouble first began when she and her partner started work on their new house.

Their garden was boarded by a private hedge “in various states of repair”, and they found that “about one third of the hedge making up the boundary with our neighbours was actually falling down”.

Keen to make improvements, the couple decided to remove the hedge after consulting with their neighbour. The woman then explained that they live next to an “elderly neighbour”, who was not keen on the plan, as she worried about the safety of her dogs.

However, as the pet owner had installed chicken wire and a picket fence on the other side of the hedge, she “reluctantly agreed”. At the time, they also told her they would plant a new hedge, but they wanted to wait until autumn.

However, the neighbour put a spanner in the works when she decided to have a tree near the edge of her garden cut down.

While the tree clearly sat on the neighbour’s property, according to the residents’ agreed garden boundary, the remaining stump “leans over”, and the exposed roots prevent the new homeowners from planting their hedge.

As such, the couple offered to split the cost of getting the stump removed, but the neighbour said she cannot afford to pay the fee at this time.

The couple responded by offering to pay upfront, if the neighbour could return the money next year. However, the neighbour later decided she did not want to pay at all, and when the couple offered to pay the entire bill, she refused, telling them she would not give them access to her garden.

Recalling the exchange, the woman wrote: “I tried to stay calm and advised her that without the stump removal it would be nigh on impossible to replant the hedge.

“She then went on a rant saying that we shouldn’t have left her without a boundary – then to top it off said that the tree she arranged to have removed was actually ours because the roots are coming from our garden!

“But she had it removed without even discussing it with us and now has made it impossible for us to remove it? She says she is going to plant some conifers along her side of the boundary.”

The homeowner said “she lost it” after hearing her neighbour’s reply and that she does not know what to do. The woman claimed: “She is being a deliberately difficult old woman.

“I feel like we’ve been considerate at every step, we’ve hardly marched it to this property and started ripping it apart and causing her disruption.

“Part of me wants to say ‘f**k you’, tear the whole hedge down on that side and put up a two metre fence.” She also felt the elderly woman unfairly expected the couple to take on responsibility for her dogs.

In a later comment, the homeowner wrote: “I did say to my husband that it’s not our responsibility to keep her dogs from getting out. She acted like it was our responsibility. She seems like such a vindictive witch.”

However, commenters were quick to rush to the defence of the neighbour. One person, who went by the username of Keyansier replied: “You sound like quite hard work and like you’re trying to start unnecessary drama for no reason.”

User Remaker wrote: “You haven’t been that considerate though, have you? You’re doing this to your timeline, when it suits you. She wasn’t happy and you ploughed on anyway, pulling out the hedge because it was convenient for you even though you couldn’t replace it at the time.

“She’s responding in kind, not putting herself out for your convenience. By the way, your entire post is ageist. Stop going on about her age, it’s irrelevant. As for ‘witch’ – unnecessary.” Several other comments also criticised the post’s writer for being “ageist” in her choice of words.

But other responders shared sympathy, suggesting they saw her side of the problem. User Tinkerbyebye suggested: “If it’s your boundary I would just put up the highest fence I could and not replant.” Meanwhile, another replied: “She doesn’t get to dictate what you do with your boundary.”