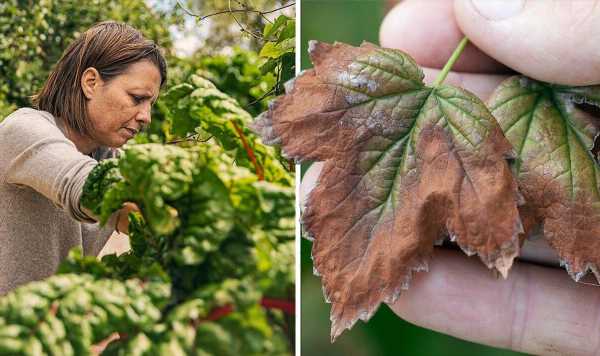 Diseases can cause significant damage to both indoor and garden plants, and it will often be easy to see on the surface. Discoloration, wilting, drooping leaves, and mould are just some of the common signs your plant has a disease, but how can you tell exactly what’s caused it? These are the most common diseases which could be responsible for harming your home-grown foliage.

What are the most common plant diseases?

Plant diseases are just one of many problems faced by gardeners, and in some cases, they simply can’t be avoided.

Learning how to deal with them is crucial to give your garden the best chance at thriving, and you should start by understanding the most common types of fungus and bacteria which are prone to growing on plants.

While some diseases like powdery mildew will leave a visible residue on the surface of leaves or soil, other problems can cause less obvious damage.

Watering plays a crucial role in preventing plant diseases, but it can also be the cause of some problems if done too little, or too often.

Overwatering your garden plants can leave the roots poorly drained, preventing the roots from absorbing the necessary oxygen to keep them alive.

As the roots weaken, they become more susceptible to soil fungus which will thrive in damp conditions.

Drooping leaves is one of the main symptoms associated with this disease, along with stunted growth.

If your plant is more wilted rather than ‘droopy’, it is likely that the cause is under-watering rather than excess moisture.

Brown spots with yellow halos can also appear when a plant becomes infected with this bacterial disease.

Symptoms often appear on the edges of the leaves, which will quickly turn a shade of yellow or brown and will droop before drying out.

This type of mildew is common in cool, moist weather – often in early spring or late autumn.

Plants will often develop yellow or white patches that eventually turn crispy and brown before falling off.

It’s fairly easy to control on most plants when the foliage and fruit are kept protected by a liquid copper spray, but it can also be prevented by controlling the environment your plants grow in.

This unsightly disease is common for many ornamental plants, as well as soft fruits.

Summer berries such as strawberries, blackberries and raspberries are particularly prone to grey mould – especially when grown under glass in damp, humid conditions.

The best way to prevent this is to keep the growing space well ventilated, evenly spaced, and treat the plant at the first signs of disease.

The dusty white residue caused by powdery mildew is the easiest way to tell if it’s damaging your plant.

This type of fungus will thrive when the roots of the plant are dry, but the air around the top of the plant is damp.

While this is unlikely to cause too much damage to established plants, it is a good idea to use a mulch in problem areas to trap moisture, and balance the roots with the dampness of the air.

This common disease is caused by the soil-borne fungi known as Verticillium dahliae and V. albo-atrum.

Both of these can infect a wide range of garden plants from the roots, causing wilting of the upper parts due to “water stress”, according to the Royal Horticultural Society (RHS).

Other common signs of verticillium wilt include:

“Woody plants are also affected, including Acer, Cotinus, Rhus, Berberis, Catalpa, Cercis and Rosa, but the full host range is very large. Conifers are not affected.”