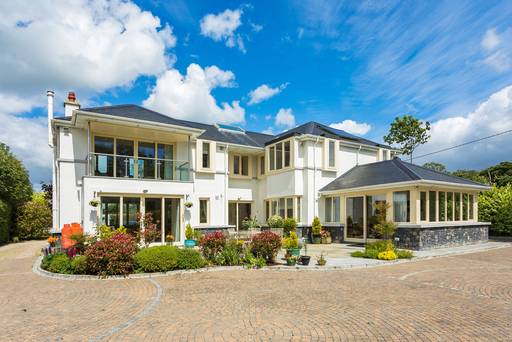 When Dermot Carroll persuaded his wife Anne that he needed a man cave that’s the stuff of dreams, they dug down deep – 9ft deep, to be precise. The result is a underground basement with a mini-cinema, a snooker table, a gym, a sauna, a four-person Jacuzzi bath, a private bar for entertaining (even though the couple rarely drink), and a surround sound system. All part of their dream home constructed by them from 2005 to 2013.

Our continual search for additional floor space usually means a side or rear extension or even an attic conversion when we get it together to invest.

But the idea having a basement got left by the wayside in Ireland at the start of the 20th century, thanks to the Victorian penchant for housing servant functions below deck, namely kitchens, pantries, boot rooms and washing and laundry spaces. The new middle classes didn’t have any servants and they didn’t want the stigma that came with going underground in their modern homes.

However, sourcing new space below ground has become a popular option in London’s wealthier streets of late, where narrow town houses are being controversially extended by up to four subterranean floors, sometimes to the great irritation of the well-heeled neighbours, who complain about constant drilling. After purchasing a bungalow just a five-minute walk from the K Club in Straffan in 2005, the Carrolls knocked it flat. They then spent some €100,000 solely on the architect’s fees to get the blueprints right for a huge contemporary two-storey-over-basement dream home with all the trappings.

When the mansion was finally finished eight years ago, during the depths of the recession, the Carrolls named it Beech Glebe and threw a house-warming party. They hired a barman to pull pints of Guinness at their new bar, which has the words ‘The D Club’ (for Dermot) etched in the mirror behind it. Family and neighbours danced till 4am, including on the table-top covering the snooker-table baize.

Originally from Drimnagh, Dermot worked as a bus driver and then as an ambulance driver – with the late comedian and Liberties native Brendan Grace as his attendant – before setting up Masterlift in the 1980s, which sells forklifts.

Now that he has officially retired (though he goes into work up to seven days a week), he and former nurse Anne are moving to Celbridge to be beside their children and grandchildren.

The house has been placed on the market at €1.85m but Dermot says the price is unlikely to return the same amount they invested in it during “the good times”.

Despite its size – Beech Glebe spans 5,367 sq ft and sits on a one-acre site – it only has three bedrooms, all of which are en suite and come with a walk-in wardrobe. The rest of the space is allocated for leisure and relaxation spaces. But three further bedrooms could easily to added to the back of the house without sacrificing the garden.

The double-fronted home is accessed through electric gates set in stone piers, with manicured lawns to the front and back. The tall laurel and beech hedging to the site’s entire boundary lends added privacy, as do the 18 CCTV cameras.

While the pretty cabin-style garden shed is visible in the rear garden, the hedging hides two workshops that Dermot calls “man-sheds”. The back garden is so large, there would be enough space to build a new bungalow, he adds.

The double-fronted home has granite to the sills of the solid wood windows that complement the granite to the driveway; the latter sweeps all the way around the house so that the family’s cars aren’t visible from the road and so that they don’t have to reverse out of a rear parking area. A stone-mason spent months painstakingly applying dry natural stone to the entire trim of Beech Glebe.

The main entrance is through the centre of the house, where there is a hallway with marble tiles and the same downlighters used to light all the other rooms. The hall looks directly onto the first set of three glass doors that open onto the south-facing paved back patio, which is surrounded by shrubbery.

A large central rooflight at the very top allows natural light to flow down to the first-floor steel-and-glass walkway, which links the master bedroom with the landing, and down further to the ground floor. Immediately to the right of the entrance hall is the wing especially devoted to the carpeted living room, which has a marble fireplace with a gas inset and the second set of patio doors.

To the left of the entrance is the rest of the ground floor. At the back of this level is an extended triple-aspect kitchen/dining/living room with a granite countertop to the feature island unit and to the floor units.

The focal point of the living area in this space is a wall-mounted electric fire. A sliding glass door opens from the conservatory-style dining area to the patio, which is ideal for eating al fresco during more clement weather.

The tiled utility room off the kitchen is fitted with a Bosch two-ring hob and a floor unit with a granite worktop, while the pantry has a tiled floor and wall shelving.

To the front of the ground floor, glazed double doors lead to a dual-aspect reading/drawing room, which has a fitted shelving unit and an electric stove that adds cosiness during the winter.

Off the reading room is a study fitted with a wall of walnut display cabinets, and there’s a wallpapered guest WC beside that. There’s also another lavatory and a cloakroom on this level.

The turning staircase that leads from the main hall to the first floor is one of two solid-wood staircases at Beech Glebe – there’s also one that goes from the separate side entrance down to the air-conditioned basement.

The hallway of the basement has half-panelled walls and double doors that lead to a large living room. Here, there is an open fireplace fitted with a white Jotul log-burning stove, a rooflight, and a solid wood floor.

The entertainment/games room, meanwhile, has a solid wood floor, reclined seating in front of a big video screen and a video projector overhead.

The room also houses the curved bar, the snooker table, and darts board. On the other side of the basement is the gym and a Jacuzzi bath on a raised platform.

The tiled cloakroom/changing area has plenty of storage, and there’s a separate WC. The maintenance room, which stores the CCTV system, is also on this floor.

The three bedrooms are off the carpeted first-floor landing, just below the roof light. The first en-suite bedroom is dual aspect and has a bay window, and there’s a walk-in shower near the walk-in wardrobe. The ensuite to the second bedroom has its own Jacuzzi with a built-in TV screen.

The master bedroom has French doors that are flanked by glazed panels; these doors open onto a covered balcony that overlooks the back lawn. There’s another walk-in shower to the master ensuite.

The B3-rated mansion has solar panels on the roof that heat the domestic water. There is underfloor heating on all three levels, but the Carrolls rarely use it because the four-inch insulation used throughout keeps Beech Glebe cosy.

Beech Glebe is in walk-in condition, but the new owner might want to tweak the decorating with more up-to-date paint colours.

The home would suit a family with children, Dermot says, especially given its location on New Road, almost opposite Straffan National School. The centre of Straffan village is just 500m away.

For commuters, Straffan village has easy access to the M4 and M7. The centre of Dublin is just a 35-minute drive away, traffic permitting.