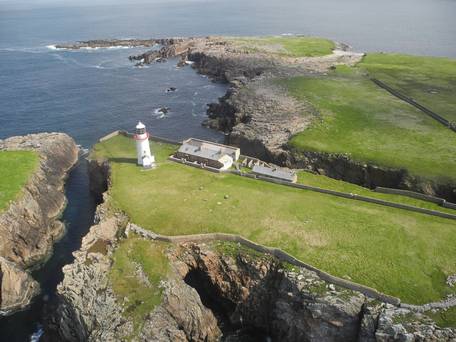 The gripping mini-series Chernobyl, which charts how a safety test at the nuclear power plant went catastrophically wrong in 1986 and how the Soviet authorities tried to suppress the accident from even its own people, has reawakened the horrors of nuclear disaster for a whole new generation of Irish people.

Ireland’s own brief flirtation with producing nuclear power wasn’t limited to plans to build as many as four plants at Carnsore Point in Co Wexford in the 1970s. After years of anti-nuclear sit-ins at the site, where protesters were entertained by singers such as Christy Moore, the plans were finally dumped in 1981. Ireland’s paranoia about nuclear power, which was also stoked by the partial meltdown in 1979 at Three Mile Island in Pennsylvania, was copper-fastened in 1999, when the Government made it unlawful to use nuclear fission to produce energy for the national grid.

But Ireland did make its own discreet step into the atomic era in the 1970s, on a tiny rocky island 2km off the south-west tip of Donegal: in 1974, Rathlin O’Birne became home to Ireland’s only nuclear-powered lighthouse.

The Commissioners of Irish Lights arranged for a radioisotope generator called RIPPLE X (RadioIsotope Powered Prolonged Life Equipment-Mark Ten) to be transported by road and sea from Harwell, the English village where the UK Atomic Energy Research Establishment was based. The generator came into operation in June 1974, charging a battery for a lamp that flashed white and red every 20 seconds. The lighthouse keepers were withdrawn from Rathlin O’Birne three months later. But by 1987, the isotope generator was removed because it wasn’t producing enough power and it was replaced by two wind generators, according to Irish Lights.

The Soviet Union used radioisotope thermoelectric generators (RTGs) to run hundreds of unmanned lighthouses, especially in remote areas in the Arctic Circle. Unlike nuclear reactors, RTGs don’t use nuclear fission, where radioactive materials are split to release a much larger amount of energy. Instead, these electrical generators convert heat produced by the decay of radioactive materials, such as plutonium, into electricity. Nasa uses the technology for space probes that travel far from the sun, rendering solar energy impractical.

The two 19th-century lighthouse keepers’ cottages beside the lighthouse on Rathlin O’Birne also became impractical after the last keepers left the island in the 1970s. As a result, Irish Lights is selling these run down time capsules, along with seven acres of land.

The pair of cottages on the uninhabited 65-acre island at the entrance to Donegal Bay will likely appeal to a buyer looking for the ultimate coastal hideaway, according to selling agent Rory Dorrian.

“Nobody has lived there for a very long time,” he says. “The island itself is very difficult to land on – you need to catch a gap in the weather in summer, usually early morning or mid-evening.”

The derelict cottages sit on a grassy headland that’s connected to the main part of Rathlin O’Birne by a sea arch flanked by stone walls. These walls create a walkway that was used to shelter generations of keepers from high Atlantic winds as they made their way to the lighthouse from the shoreline landing point on the other side of the island. One of these keepers was Enda Kenny’s maternal grandfather, James McGinley, who spent three stints manning the lighthouse, guiding fishing trawlers safely home to Donegal Bay. McGinley grew up in a thatched cottage across the water from Rathlin O’Birne. In 2011, the then-Taoiseach gave a eulogy at his mother’s funeral that described how it was her father’s job to “light that light – the first and last post either leaving or entering Ireland, a point of contact, a point of safety, a point of comfort”.

The cottages were likely built around the same time as the lighthouse, which itself went into operation in 1856. Like most of Ireland’s lighthouses, it was built to designs by George Halpin, the founding father of Irish Lights.

The lighthouse keepers’ families lived in the two cottages, until Irish Lights built a terrace of four shore dwellings on the mainland, at Glencolumbkille, in 1912. These homes were sold in 1957.

From the 1980s onward, advances in navigational aids increasingly negated the need for lighthouse keepers and their accompanying living quarters. While Irish Lights has sold a number of lighthouse dwellings to private owners, 12 others were given a new lease of life as part of the Great Lighthouses of Ireland tourism initiative that enables guests to stay in, or visit, a lighthouse.

The lighthouse on Rathlin O’Birne is excluded from the current sale as Irish Lights will continue to maintain it. The structure and the cottages are surrounded by 8ft-high stone walls to protect them from the vagaries of the Irish weather. Rather than fronting the Atlantic, the cottages face the sea-cliffs of the Slieve League mountain and the Silver Strand beach at Malinbeg.

The semi-detached stone cottages, which sit 85ft above sea level, have three bedrooms each and span 1,250 sq ft and 1,350 sq ft. The price-tag of €75,000 may seem cheap, but there is no fresh water or electricity on the island. And the new owner will need deep pockets to make the cottages habitable. That is, if they can get materials onto the island in the first place: the only way to land, either from Malinbeg or the fishing port of Killybegs, is by RIB and it is a further 750m trek from the landing point to the cottages. In the winter, visitors risk being trapped for months on end by poor weather and by the treacherous reefs that surround Rathlin O’Birne. In January 1975 the trawler Evelyn Marie sank in the Rathlin Sound with the loss of six crew. The following year, the trawler Carrig Una sank on the same reef, with the loss of five people, and in July 2017, two men died when their RIB ran out of fuel close to the shore of Rathlin O’Birne.