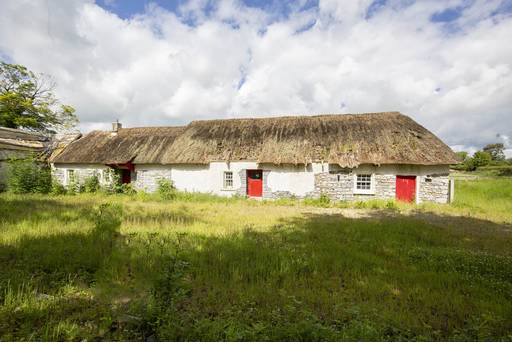 If you’re open to the idea of buying an listed building that needs some work, this might be the one of you:

Once upon a time, someone bought an 1820s fairy tale thatched cottage near Drumree in Co Meath which was down on its luck. They got to work with a new broom with a view to extending and doing it up. But then they had to down tools. The cottage was abandoned mid- refurb in 2002. Meantime, it was taken by the bank, which has now placed it on the market in search of a fairy godmother or godfather.

Tell me more about the place…

This is a listed building. Some parts weren’t roofed properly, or had the roofing stripped before the project stopped.

Original thatched cottages are hard to find and this one appears to have solid masonry and is huge to boot (3,700 sq ft). The council is likely to view with favour, anyone prepared to return it to its one-time splendour. At present it is laid out in nine rooms. A tourism business calls?

And the bad news?

Seventeen years of Irish rain. There is a good deal of water ingress in parts of the property and some questionable tiling has been installed. Thatching is expensive and it could cost €70,000 to €100,000 alone. Given the above, the asking price could also be questioned.

How much to buy it?

The vendor wants €250,000. But reasonable propositions will be heard.

And to fix it up?

What will I end up with?

Who do I talk to?