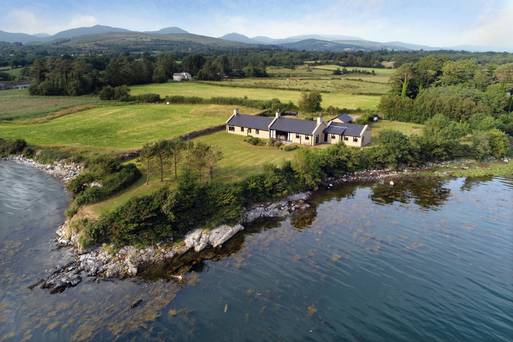 Tourism has always been big business in Kenmare, Co Kerry, but it wasn’t immune to the hard times that landed on us all when the Celtic Tiger came to an end.

After a few tough years, the west coast came back fighting with the launch of the Wild Atlantic Way, which boosted tourism-driven activities all around the coast. The idea, thought up by Government spin doctor and Galway native John Concannon, brought tourists streaming back and poured money back into the county.

The housing market in Kerry however didn’t bounce back so quickly.

During the crash years, overseas buyers arrived to snap up holiday homes that were at rock bottom prices. Some relocated and made Kerry their permanent home, while others, like the owners of this bungalow, looked forward to their summers in the sometimes sunny, but always scenic county. Kenmare has always been the hotspot in Kerry, with a strong community made up of the indigenous Irish mixed with many Dutch, Germans and Brits who have put down roots here. The US-based owner of Doon Point grew up in Kenmare and always felt a pull back to the homeland. He bought the house about 12 years ago and travelled back and forth from New York when he could. It has come to a point where he now doesn’t use it as much as he would like, so has decided to put it on the market.

The location of the house is definitely its biggest selling point. Not many properties come on to the market that are right on Kenmare Bay and within a short distance of the town. The house looks out over the bay with the Caha and McGillycuddy Reeks mountain ranges in the background. The islands just out on the bay are not only perfect for a kayaking trip, but also give the property a sense of shelter.

The house comes with a little private pebbled cove, where you could put in a jetty or mooring point.

The property itself is about 15 years old and in very good condition. Doon Point is a low-slung bungalow with varying roof heights and a drab exterior. But what it lacks on the outside, it makes up for on the inside.

To the left of the entrance hall is a large bedroom with en suite and walk-in wardrobe. This is away from the rest of the house, so would be ideal for guests or anti-social teenagers. The rest of the property flows down the other side of the building. The first room is the kitchen/dining room, which is fitted with dark, solid wood units and timber worktops. There is a solid-fuel stove in the middle of the room with a tiled surround. Window seats have been built to make the most of the views, but also come with drawers for extra storage. There is a large utility room that is plumbed for a washing machine and has a door to the garden.

The dark tiled floor follows on through to the drawing room. The double-aspect room has floor-to-ceiling windows on one side, so you can always keep one eye on the bay. There is an open fireplace with concrete hearth and timber mantlepiece for cold winter nights. A corridor then leads you down into the sunken lounge or TV room. There are also two bedrooms off the corridor, one with a solid fuel stove and an en suite shower room. There is a family bathroom in the middle of both bedrooms.

The house is at the end of a road that it shares with just one other homeowner. It’s the last stop before the bay, which makes it private and peaceful.

It sits on 1.4 acres of land, mostly laid in lawn with trees and shrubs acting as a border. There is a garage that is 260 sq ft, so could easily fit a car and a few kayaks.

Doon Point is less than 10 minutes by car to Kenmare. No matter what the season, the town is always buzzing with locals and tourists. There is a great mix of pubs and restaurants, as well as independent shops and boutiques.

If hotel dining is your thing, there are four top hotels on your doorstep. Dromquinna Manor run by John Brennan is just down the road, but could also be accessed by water in a few minutes, if you like the idea of rowing to lunch at their Boathouse Bistro. It’s also a very popular spot for those who like a bit of luxury when they’re camping, with their tents coming with a ‘wilderness bed’ with goosedown duvet and pillows, and a hamper with freshly ground coffee and croissants. This might be an ideal spot to offload any extra house guests.

The Park Hotel, owned by Francis and John Brennan and renowned for its high tea, is just outside Kenmare town, Sheen Falls is about 10 minutes away by car, and a trip to Parknasilla in Sneem will take about 20 minutes. The Park and Sheen Falls are both five-star hotels, with award-winning restaurants and spas, so you’ll never be stuck for something to do on a rainy day in Co Kerry.